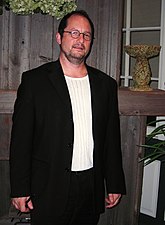 Bart D. Ehrman (1955–) is an American New Testament scholar and author, and the James A. Gray Distinguished Professor at the University of North Carolina at Chapel Hill. He is currently Chair of the Department of Religious Studies at the same said university. His books are mainly about the Bible and Scriptures and often contain textual criticism.

Bart Ehrman was an evangelical Christian as a teen, however through his hard, careful study of the Bible, along with the problem of evil, he now identifies himself as an agnostic.[3]

Although skeptical of classical Christian theological claims, Bart Ehrman does not subscribe to the "mythicist" theory that Jesus of Nazareth was an entirely fictional person. The first book describing his portrait of the historical Jesus was his 2000 Jesus: Apocalyptic Prophet of the New Millennium, in which he heavily (but not entirely) followed Albert Schweitzer in arguing that Jesus was an apocalyptist who believed that cataclysmic end-time events were shortly going to occur. In March of 2012, Ehrman published a book giving his reasons for believing Jesus actually existed, entitled Did Jesus Exist? The Historical Argument for Jesus of Nazareth.

So why do many people get excited over any work by Ehrman? León Santiago opines:

Bart Ehrman is a rock star. Well … as close to a rock star as a geeky Ivy League academic with tenure can get, anyway. After a long industrious, prolific, and distinguished career teaching the historical Jesus, he now finds himself in a most enviable position, one that other lesser-known New Testament scholars drooly aspire to. He is without question the best-selling author in the field of New Testament studies today, penning one successful (and usually provocative—at least to the evangelical mindset) book on Christian origins after another. His is on an impressive (and lucrative) streak. Well-known among scholars, he's also become an ubiquitous presence in the talk-show circuit, in book-signing tours, on the radio, in documentaries that profile the latest reconstruction(s) of Jesus, and in all manner of media. He's big time, a go-to "professional expert", as ubiquitous now as Bishop Spong, Elaine Pagels, Dom Crossan, and N.T. Wright have been for a while.[4]

Per the Conservapedia "Bart Ehrman" article:[5]

Bart Erhman debated Christian apologist William Lane Craig at the College of the Holy Cross in Worcester, Massachusetts. The topic was, Is there Historical Evidence for the Resurrection of Jesus?. Dr. Ehrman's main problem was that he would not accept the possibility of God intervening in the physical world to Resurrect Jesus.

Well that certainly is a bizarre way of stating Erhman's "problem", which is not Erectile Dysfunction, but rather "he would not accept the possibility of God intervening in the physical world to Resurrect Jesus." However the more discerning viewer might note that "Ehrman hammers home the point that historians exclude appeals to miracles, on methodological grounds."[6] And that Craig's problem is that he is not credible (perhaps also suffering ED) and that extraordinary claims require extraordinary evidence.

Ehrman's work on the question of the historicity of Jesus—as a sustained argument that Jesus lived—is not comparable to any other work by a contemporary scholar who also holds the historicity position. Ehrman and Casey are the only contemporary "secular" scholars to comprehensively address this issue. Ehrman writes, "Odd as it may seem, no scholar of the New Testament has ever thought to put together a sustained argument that Jesus must have lived."[8] Ehrman also notes that his book Did Jesus Exist? was written for a popular audience and that in regards to the question of the historicity of Jesus, "I was not arguing the case for scholars, because scholars already know the answer to that question."[9]

Ehrman believes in a Jesus who was a Jewish preacher and teacher crucified during the reign of Pontius Pilate. Towards the end of his book, Mr. Ehrman indicates that he believes that his Jesus was born into poverty and was either a carpenter or a carpenter’s son. He began his public ministry while trapped in a poverty-stricken lower-class life. He was an “The end is nigh! Repent!” type of preacher. He was baptized by John the Baptist. He “raised the ire of Pharisees,” causing a ruckus in the Temple but not at the scale depicted by the Gospels. Pilate personally ordered his crucifixion after a brief trial at the beginning of Pesach, the holiest holiday of them all. Roman soliders flogged Mr. Ehrman's Jesus on his way to the Cross, and he was dead within six hours.[10]