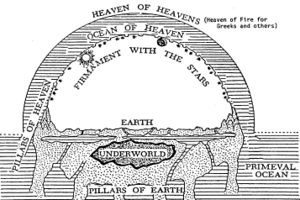 According to some YECs, pre-flood Earth was enveloped by a layer of ice that protected the biosphere from cosmic radiation.

"Firmament" is the most common English translation of the Hebrew word raqiaà, as used in the Bible.[note 1] The Firmament is a vast, solid[1] plate/dome/sphere upon which God affixed the stars.[2] It separates the Earth from the waters of Heaven,[3] but has floodgates for when God feels like letting it rain, or simply killing people.[4]

Elsewhere in the Bible, the Firmament is compared to a tent.[5] It is made of a metallic, reflective[6] or crystalline substance.[7]

The early model of the Universe had a flat Earth with a flat sky held up with pillars, much like post and lintel construction. After dome construction was invented, it became obvious that God had used the best construction method and earth was flat with a domed sky. Plato showed that Earth was a sphere and proposed seven crystal spheres holding the heavenly bodies giving us seven heavens.[8] The Bible uses all models without noting their incompatibilities.

This shows that the writers of the Bible believed that the sky was a literal solid; thus, creationists have tried to come up with various excuses.[9] Kent Hovind He Who Must Not Be Named claims that the firmament was a shell of solid ice which completely covered the Earth before the Great Flood.[10]

Of course, rational people know that this is bullshit. The simple theory of gravity would send any such canopy crashing to the ground but of course, gravity is just a theory. Reasonable Jews, Christians, and Muslims assume it is one of the allegorical parts of the Bible, or recognize it for what it is, a pre-scientific attempt to explain part of the world (much like earthquakes or lightning).