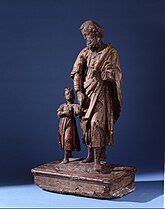 Joseph, (Hebrew: יוֹסֵף, "Yosef") was the husband of Mary and the father of Jesus. Well, the dude who raised him, anyway.

Joseph is not mentioned in any of Paul's letters, nor is he mentioned in the Gospel of Thomas or the Gospel of Mark, the two oldest gospels, giving support to the idea that Joseph was a toss in,[note 1] likely to add some kind of family name to Jesus and more importantly, to provide the all necessary link to King David (Despite Jesus' having been born by a virgin birth and therefore not related to David through Joseph).[note 2] Of course, like many things found in the Bible, the two lineages for Joseph himself disagree — not about some ancient ancestor 400 years ago, but they disagree about Joseph's own father. Matthew names Joseph's father as Ben Yakob and Luke claims Joseph is the son of Hile. Those who believe in an infallible Bible have two explanations for why there are "supposedly" these two "differences" in a Bible with no contradictions or errors: 1) that the real father was Yakob-Heil, and used his middle name (something that isn't done in 1st century CE Judaism if at all), or 2) that Heil is actually the mother of Mary, not Joseph.[note 3]

Just as there is no archaeological evidence for Jesus, there is also no actual evidence for a carpenter named Joseph living in or around either Bethlehem or Nazareth, married to a Mary with a child named Jesus.

If you buy into the Catholic tradition, Joseph would have been a very sexually frustrated man since the Virgin Mary not only gave birth to another man's son God's son, she remained a virgin all her life.[note 4] Catholics as such also manage to ignore references from the New Testament and non-canonical scriptures to the brothers and sisters of Jesus.

Unfortunately for this particular urban legend, Judaism does not condone life-long celibacy, for the sex act is discussed in the Torah as part of a healthy (and procreative) marriage. A good Jew should try to have as many children as possible to fulfill the commandment to be fruitful and multiply but must avoid sex while his wife is pregnant. Matthew 1:25 suggests that the couple had a normal married relationship after the birth of Jesus.

The last mentioning of Joseph in scripture is during the return trip from Jerusalem, when he and Mary lose the 12-year-old Jesus and later find him in a temple in the midst of the teachers. He was absent at the wedding of Cana, and during Jesus' crucifixion, Jesus made arrangements for his mother to be cared for by the Apostle John, not her husband Joseph. As a result of this, some assume that if Joseph really did live, he more than likely died before Jesus began his earthly ministry.[1]

As with most of the mythology surrounding Jesus (outside of his being a teacher, prophet and/or mystic), the story of Joseph as well as Mary and the virgin birth are likely made up.

Joseph is the patron saint of Vietnam and anticommunists. For those who don't get the joke, Vietnam is an officially communist state and the majority of its population are Buddhists.

One memorable Catholic tradition suggests that burying a statue of Joseph in your yard (sometimes upside-down) will help you sell your house, presumably because he wants to get out of there.

Three other men called "Joseph" are relevant to Abrahamic religions: