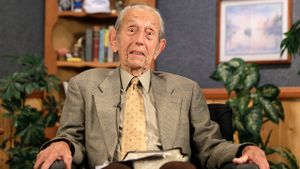 Harold Egbert Camping (1921–2013) was a former civil engineer turned false prophet, radio evangelist and crackpot who famously predicted that the return of Jesus would be 6 September 1994.[2] When Jesus didn't return, he modified his "prophecy" to claim that September 6 was the day that God removed his Holy Spirit from the earth and that nobody could be saved after this date and that God was calling all those already saved to exit the organized churches. He then changed his predicted date for Jesus to return to 21 May 2011,[3] and 21 October 2011 after that prediction failed. 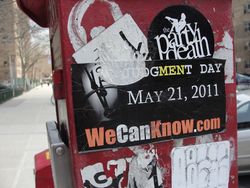 In 2010, Camping got the bright idea that the world was going to end on 21 May 2011, using Numerology bullshit from the Bible.[4] This pointless digging in the Bible, that even the most bored people in the world wouldn't waste their time doing, was apparently so convincing to Camping that he immediately set-sail on his epic quest to warn the entire world about the coming doom.

Thousands of billboards were erected around the world, while some unemployed person in (drumroll...) Colorado Springs bought out park bench advertising space to promote the rapture.[5] A caravan of vehicles promoting the rapture nonsense were dispatched out of Oakland California and were sent up through various cities throughout the US and Canada.[6]

In total, Family Radio amassed an impressive $100 Million in advertising costs,[7] money that could have been better used for far better things, like toilet paper... no literally, like, actual toilet paper.

The Rapture failed to happen on 21 May 2011.[citation NOT needed] Camping disappeared for a couple of days, or at least tried to. He was confronted at his house on the afternoon of May 22nd, where he claimed he was "flabbergasted" the rapture did not occur. "Give me a day, no interviews today ... I've got to live with it, I've got to think it out".[8]

He resurfaced on Monday, 23 May[9] and claimed that 21st had actually been a spiritual apocalypse, not a literal one. Damage was done, though. One woman attempted to kill her own children in preparation for the rapture,[10] while a 14 year old from Russia had committed suicide on 21 May to avoid judgement.[11] Countless followers were fleeced of their money, including Robert Fitzpatrick who had spent $140,000 of his life savings publicizing Camping's bullshit.[12]

This didn't stop Camping, however, as he then claimed that newer calculations put the end of the world on 21 October 2011, saying that May 21 was a day when God’s judgment came on the world "spiritually". But Family Radio still stuck to the assertion that the world would literally come to a fiery end on 21 October 2011.[13] Presumably, nobody would be allowed to change their mind after 21 May, as God's judgement had already occurred (This is why Camping vowed not to put up any updated billboards for his revised prediction). In other words, there was no hope for the unrepented during this 5 month time-frame: they had no choice but to either commit suicide, or beef it out and live life to the fullest for 5 months while waiting their inevitable doom.

As October 21 got closer, Camping again went into hiding,[14] but occasionally even made up a bunch of lame excuses for his failures by announcing that there would be "No big display of any kind"[15]. It seemed this was his very indirect/beating around the bush way of finally admitting that he had no clue of what he was talking about.

Big surprise, 21 October 2011 past and absolutely nothing happened[citation NOT needed]. Sure enough, it was indeed revealed later that Camping had actually admitted on the 16th that he did not know when the end would come.[16] Of course Camping admitting this before the 21st was too much for him.

For his miserable failure to try and predict the future, he shared the 2011 Ig Nobel Prize for Mathematics with some other prophetic losers: Dorothy Martin, Pat Robertson, Elizabeth Clare Prophet, Lee Jang Rim, and Credonia Mwerinde.[17]

One of the things Camping openly stated with his message of rapture on 21 May was that Christians would no longer need their money. He asked for donations for the ministry, and help spreading the word of the impending rapture. With no refunds after he was proven wrong, people were led to believe it was just a large scam (one of the largest religious scams in history) to get followers' money.[18]

This seems to be backed up by reports from his own ministry that it retained all of its cash and assets at normal levels before the rapture, and workers still planned business as usual the next week.[19]

Harold Camping was originally a Calvinist and founder of the Family Radio network which was heard on the shortwave radio bands over WYFR, and on several AM and FM radio stations mostly located in California. Ever since he fell off the deep end trying to predict the date of Jesus' return, nobody is quite sure what he is anymore, especially since his "revised" date, 21 May 2011, turned out to be 1994 all over again.[note 1]

In 1942, Camping received a Bachelor's of Science degree in civil engineering from the University of California, Berkeley.[20] He has used his knowledge of engineering mathematics to develop a mathematical system that he claims can interpret biblical prophecies.[21] Camping's engineering background also allows certain commentators to credit him as a "former civil engineer" while ignoring the fact that he was little more than a D-list Pat Robertson.[22] Camping denied the assurance of salvation doctrine common to mainstream Protestant churches and Roman Catholicism.[23]

Harold Camping escaped the death sentence commanded in the Old Testament for prophets whose predictions fail (see Deuteronomy 18:20-22). The United States is not a theocracy so God had to do it himself.

In June 2011, Camping suffered a stroke and ended up with slurred speech.[24] This made it harder for him to spread more bullshit, although at least the cash he raked in from the rapture should have bought him some pretty good medical treatment. Or was it punishment from God?[25] Camping had since the latest October 2011 failure retired from radio broadcasting; he publicly recanted his views on doomsday and declared that he would not make any more money prophecies. (He stayed true to his word.) Camping did not believe in the 2012 apocalypse or the Mayan Calendar, [26] but then Camping wasn't much of an expert at telling when the world will end; it's pure stopped clock.

Two years after the doomsday fiasco, Family Radio announced that Camping had died in his home at the age of 92, mostly due to complications from the stroke.[27] The end had finally come (for him at least).

Family Radio is a radio network founded by Harold Camping in 1959.[28] Though considerably diminished since Camping's multiple failed apocalypse predictions,[29] the network claims to run about a hundred radio stations.[30] Family Radio airs a lot of old time religious hymns and the occasional creationist propaganda show. After Camping's death, his droning Bible study programs aired regularly until they were given the boot in 2018.[31]