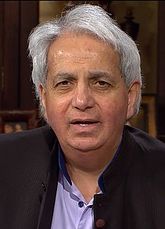 Toufik Benedictus "Benny" Hinn (1952–) is a Palestinian faith-healer, televangelist, prophet, Sith Lord,[1] Dragonborn,[2] a skilled street-fighter,[3] minister and, most importantly, a crank. His shtick is a phenomenon he calls "The Anointing", the power purportedly given by God and transmitted through Hinn to carry out such "supernatural" acts as people fainting in front of him as he pushes them to the ground or yells into a microphone.

His purveyance of bullshit is second to none, and he certainly knows how to extract the profits from prophets and how to fleece the flock. He performs circus acts called anointments and "Miracle Crusades" in large stadiums. These performances are televised on his "This is Your Day" television-program.[note 1]

Despite a number of exposés from both Christian and secular organizations, Hinn remains active.[4] Even Coronavirus can't stop him, but then again what hoax has it stopped?

Anointing his victims of financial fraud[edit]

Hinn takes money from thousands of desperate souls seeking cures to illnesses such as terminal diseases or "homosexuality." Those who are lucky enough to get on stage are yelled at through a microphone and made to collapse under the pretense that God's great will is channeled through scumbags standing on a stage and shot out in jolts of energy-bolt-cures which the victim takes by falling down on the ground due to the extreme impact of gullibility and pure fantasy. His weapons of choice are hand gestures and smacking victims in the face with a jacket. Sometimes his amazing healing powers are so strong he can even cure dozens of people of their money in large groups. Many of his victims lose not only their hard-earned cash but also their lives when their cancer metastasizes despite Hinn's expensive miracle cures.

Hinn's ministries are part of a movement known as "prosperity gospel". The basic premise is that if you have enough faith to give generously to an already wealthy church, you will be rewarded by God somewhere down the road. Hinn spends hours lecturing on the power of the Holy Ghost and encourages his audience to suspend reason and let the spirit move them (to empty their bank accounts and/or max out their credit cards so God will bless them). His sermons include numerous anecdotes on the various 48-hour to 40-day clear and undisputed miracles where people are rewarded financially, or otherwise, after giving to his ministry. Eventually, his henchmen distribute several dozen buckets among the audience and rake in the cash. Though it sounds hard to believe, his ministry is suspected of misusing its funds.

Supposedly, on one occasion, Hinn even managed to slay himself.[5]

Hinn hawks "The Master's Healing Presence Bible", his own private edition of the Bible, with bits he added and quotes from other authors, who are all dead so they won't criticise him on how the quotes are distorted. It’s "filled with the miraculous and the powerful manifestation of God"[6] and what's more, sections dealing with "healing, the Holy Spirit, faith, prayer and, the presence of God" are color-coded.[7]

It’s a special Bible, it’s a healing Bible and at just under £90 a volume it’s an expensive Bible.[8]

If Hinn cares so much about the Bible, perhaps he should look at 1 Timothy 6:9-10:

But they that will be rich fall into temptation and a snare, and into many foolish and hurtful lusts, which drown men in destruction and perdition.[9]

In 2001, HBO's America Undercover ran an episode covering both Hinn and German crank Reinhard Bonnke.[10] As part of the episode, and at America Undercover's request, Hinn supplied the names of five people "healed" at his Crusade. When HBO checked back a year later, none of the parishioners had been healed at all (their initial feelings of being healed can probably be attributed to the placebo effect). Two of them had subsequently died: a woman whose cancer had come out of remission shortly after she attended the Crusade, and a ten-year-old boy, also of cancer, whose parents blamed themselves for not being "faithful enough," as they felt that their boy would have lived if only they had given Hinn more money. In typical Hinn fashion, he blamed HBO.

CBC Television also ran a program, Do You Believe In Miracles uncovering the scam when Hinn was exposed lying and taking money belonging to his church to spend himself. Hinn even employed security guards disguised as men from the church who kept genuinely sick followers away from the stage.[11] "Dateline" secretly filmed a great deal that Hinn wanted to hide.

Benny Hinn: "You're tired of all the pills you've taken, and all the needles they put in your body and all the pain you felt. Well, I'm here to tell you, you will be healed tonight!"[12]

People with clearly visible conditions like cerebral palsy and other types of paralysis could not get onto the stage for healing though some were desperate. This may have put, at least, the visibly sick less at risk of being persuaded to stop taking medication.[12]

Just about every "prophecy" Hinn has uttered has turned out to be false. One of his greatest failures happened on 31 December 1989, when he went into mass production mode and "prophesied" that the following would occur over the 1990s:

Every one of these predictions failed.[citation NOT needed] The closest he got was Fidel Castro's death, who did die... in 2016.

He once claimed to have video of Jesus walking around in one of his meetings. When asked to show the video his staff said that it had been “misplaced”, and he claims he healed every patient at a hospital in Sault Sainte Marie, Ontario, Canada.[note 2]

In October 1999, he appeared on the Trinity Broadcasting Network and claimed that God gave him a vision that thousands of the dead would watch the network and be resurrected by touching the television screen.[note 3]

Taste in luxury, and its drawbacks[edit]

Hinn is known to stay in $10,000 a night hotels. Local staff working backstage for Hinn are instructed not to make eye contact or otherwise approach him as this might "take him out of the moment."[14] Hinn travels modestly in a lavish private jet plane worth just $36,000,000 up-front, with maintenance costs of $600,000 annually. Hinn lives in a humble mansion worth only several million dollars in a select rich area.[11]

Hinn's rich tastes are apparently beginning to catch up with him; he asked his followers to contribute $2.5 million in April 2013 in order to get out of debt, although an anonymous donor (who conveniently stated that "God wants [Hinn's] ministry to be completely out of debt, and I want to plant an anointed seed that will help you take a giant step toward becoming totally debt-free!") was supposed to match that amount.[15] No one's sure what the IRS thinks about this yet, although they've previously given him the stinkeye on the issue of suspicious fundraising.[16]

Criticism even from other Christians[edit]

The irreligious are not alone here, even other Christians have exposed Benny Hinn as well. American Pastor John F. MacArthur's website contains several articles exposing Hinn along with other false prophets.[17][18] While Hinn's fans are unlikely to be persuaded by the irreligious, the faithful have a better shot at least.