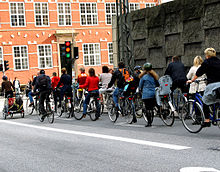 A bicycle is a human-propelled vehicle, typically used to transport a single person or light freight. The bicycle is the most energy-efficient way to move a person over a given distance, including walking. While bikes appear simple enough (and can usually be maintained and repaired with simple tools and basic mechanical skills), they were in fact only invented after the steam engine and the locomotive.

While many in North America see bicycling as primarily a recreational or fitness activity, and a rather dangerous one at that since the roads are frequently not designed to accommodate bikers (to say nothing of weather conditions in some places), in much of the rest of the world -- and increasingly in some North American cities such as Portland Oregon and Vancouver British Columbia -- riding a bike is many people's primary means of transportation. In some European cities like Amsterdam or Copenhagen, a bike is a must-have accessory for pretty much everyone. Cargo bikes are widely used in much of the so-called "developing world" to move goods to market and they are increasingly used in the Netherlands and Denmark to move children around. 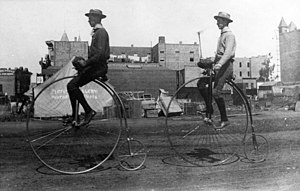 When the bike was first invented, it was the first practical means of individual transportation that did not require the (expensive and time consuming) care for an animal. This meant that suddenly mobility became truly available to the masses and caused huge societal upheaval starting from the urban male upper classes in Europe but eventually reaching down to women, the poor, minorities, rural areas and young people. The industrial revolution meant that soon bikes could be mass produced and within a short time from the first practically usable bike hitting the roads everybody who could at all afford it got one. And with good reason: Imagine a choice between walking everywhere and taking a bike. This early phase of euphoria was called "bike mania" and did not stop until the car became widespread. And here is a rather interesting point. If you look at the names of both the manufacturers and the political advocates for early bikes, you will find familiar names. Names that are familiar - because those self-same people would later build and promote cars.[1] Some of those people even became instrumental in designing policy for the car instead of the bike. However, in the early phase when bikes where still the "hobby-horse" of rich men in their twenties a movement for "good roads"[2] demanded the infrastructure to ride a bike every which where. Given that people with power and influence demanded that, politicians of all stripes delivered and more and more streets where paved, in turn driving demand for bikes, which in turn drove the calls for better roads. When the car arrived, it basically co-opted the existing infrastructure both in terms of political clout and in terms of streets going hither and thither and yon. Another huge aspect of bike mania was the spread of cheap(er) bikes to the lower classes and - especially - women. For the first time a woman could leave the house and just go where she wanted. Of course the proponents of Kinder Küche Kirche were not happy with this and you can learn quite a lot by reading the pamphlets of both suffragettes and their opponents on the subject of bicycles. 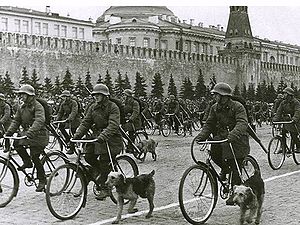 Alas, the good days were not to last. While almost every soldier went into the First World War on his bike (or at least took the bike to the train station where he took the train to the front) the war itself changed the world. Mass motorization reared its ugly head with tanks being used (first by the Brits) and airplanes developed from a curiosity to a valuable tool in intelligence and reconnaissance if not yet a vital asset in the fight itself. This of course prompted policies for a "dual use" of infrastructure. Despite the fact that there indeed were[3] military applications of the bicycle, generals and political leaders recognized the immense military value of cars and planes. The industrialists who saw bigger profit margins on a $500 car or a $50,000 plane than a $5 bike of course had nothing against this - to say the least - and thus an infrastructure for planes and cars was built while trains and bikes fell by the wayside.

Oil crisis and the consequences[edit] 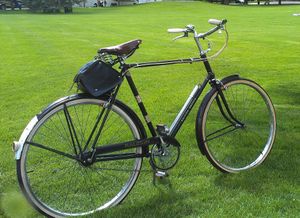 This trend was only reinforced by the second world war and in the 1950s most people in Europe and North America became affluent enough to afford a car and at least an elite could fly every once in a while. Programs like Eisenhower's interstate highway system[4] and the "Volkswagen"[5] in Germany greatly aided in that and by the late 1960s bikes were seen as a children's toy at best and a symbol of past poverty at worst. It could have stayed that way for ever - at least in the high income countries - had there not been one war in the Middle East. In 1973 the oil price rose dramatically due to events in the area between the Nile and the Persian Gulf. This was a huge shock especially to Western Europe as cheap oil was kind of an underlying assumption in all political and economic decisions. Drastic measures were taken. France decided to greatly expand nuclear power and the high speed rail project was switched from gas turbine to electric traction. Germany instituted "car free Sundays" and the Autobahns turned into empty spaces showing for the first time in decades that there were indeed alternatives to cars. Even if at the time, some people had ideas no brighter than spanning horses in front of their cars. In that time two small countries on the periphery of Europe made an interesting decision. In Denmark experimentation with wind power as a means to generate electricity were intensified, but more importantly, Copenhagen decided to become a city of by and for cyclists. In the Netherlands meanwhile, the 1970s coincided with a gigantic mass protest movement against children dying in traffic under the motto "stop child murder".[6][7][8][9] Horrified, politicians decide to act and to protect children on their bicycles, many Dutch cities banned cars from certain streets, created dedicated cycle-routes and in many cases put physical barriers between the street and the cycle-route. Coincidentally this meant that cycling not only became safer, it also became faster. Within a few years adults were getting on bikes in numbers that had not been seen since the first "bike mania". While some other cities in countries that weren't the Netherlands or Denmark also experimented with cycling, Copenhagen and Amsterdam above all others became the world model for how to do cycling right and despite other places catching up they are still a destination for many a bike enthusiast. 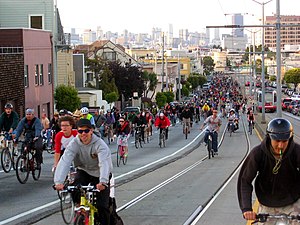 As can be seen by this discussion of history, Cycling is dependent upon politics to a great degree. Unfortunately, many people have a zero-sum-approach when it comes to traffic planning. Every square inch that is given to bikes has to be taken away from cars in their mind and thus many people are opposed to bike lanes in principle. Others spread fear, uncertainty and doubt and write strange opinion pieces on the "good old days" when riding a bike meant negotiating suicidal New York drivers and inhaling a few cancers' worth of car exhaust.[10] In the US especially, but surprisingly often in continental Europe as well, cycling has become anathema to the political right and every attempt to propose even the most modest improvements for cyclists, let alone investment in dedicated infrastructure is met with an amount of hostility that is hard to understand.

Hipster Bicycle courier on a "fixie"

Once only popular with hardcore bicycle couriers, indoor track cyclists, and circus performers, fixed gear bikes have found particular favor among the young and urban, who often make use of them as a macho emblem, fashion accessory, or political statement. Unlike most bikes, the hubs on fixed gear bicycles eliminate the "coasting" or freewheeling feature; so the pedals are always connected to the rear wheel. That means (unless you can perform a gymnastic split while seated) your feet must whiz around on the spinning pedals no matter if you are slowing down or accelerating. In some circles, it's considered hip and macho (at the same time) to do without any external brakes at all, allowing fixie-riding urban hipsters to enjoy exciting brushes with danger on their way to Starbucks or their latest startup digital business.