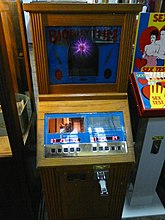 A biorhythm machine at the Musée Mécanique

Biorhythms are theoretical cycles which allegedly dictate health and behavior. The name is evocative of circadian rhythms,

the difference being that circadian rhythms are based on scientific observation, while biorhythms are pure pseudoscience.

Due to its origins, the theory of biorhythms can be considered a first cousin of numerology.

The original theory was dreamed up by Wilhelm Fliess (1858-1928), who played with mathematics and eventually came to the conclusion that everything could be tied back to the numbers 23 and 28. He decided that these referred to bodily cycles, which he dubbed "male" and "female" respectively. Years later, Professor Alfred Teltscher added a third 33-day cycle and renamed the three cycles physical, mental and emotional. Thus, the theory of biorhythms was born.[1]

Since the development of the original theory, many additional cycles have been submitted, including intuitional, aesthetic, spiritual, passion, wisdom, mastery, gullibility, tragedy, comedy and tastiness.[2] However, the vast majority of biorhythm technicians focus on the core cycles: The 23-day physical cycle, the 28-day emotional cycle and the 33-day mental cycle.

It's good when a cycle is above the baseline and bad when it is below the baseline. That is, unless a particular reading looks wrong, in which case it's good when a cycle is moving upward and bad if it's heading downward, regardless of position. Even if you were at a pessimistic period where all cycles were below normal and heading downward, it only happens in rare cases and will quickly rebound after a few days. So basically a biorhythm chart can say anything at all.

As with other charts that use one point of reference (in this case, the date of birth), the same chart can be recycled for other people. After an identical number of days have passed from birth, everyone's biorhythms are the same.

Biorhythms have the advantage over birth-chart astrology in that it's much easier to chart somebody's biorhythm than to calculate planetary positions and deduce horoscopes. This makes biorhythms ideal for simple computer applications and websites, and a wide range of software is available, from in-browser javascript to mobile phone apps to open source.[3] In the 1970s, biorhythm calculators were common in public areas in the US (similar to speak your weight or love tester machines) and electronics companies like Casio built biorhythm functionality into portable electronic calculators.[4][5]

Scientists speak in terms of "biological rhythms," or "chronobiology," distinguishing between ultradian (e.g. 90-minute sleep cycles), circadian (daily), infradian (e.g. monthly) or annual rhythms. There is a journal, Biological Rhythm Research, which covers "any aspect of research into the broad topic of biological rhythms."[6] It began publication as Journal of Interdisciplinary Cycle Research from 1970 to 1993 and changed to the the current name in 1994. It covers topics such as the effect of jet-lag or illness on biological rhythms.

Women, as most people know, experience periodic fluctuations in emotions known fearfully by men as "that time of the month". Some scientists speculate that men may experience similar, though less severe, hormonal cycles as well.[7][8]