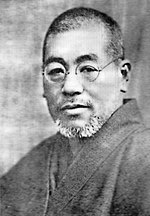 Mikao Usui, the creator of Reiki.

Reiki (properly pronounced /reːki/) (霊気) is a pseudoscientific energy therapy that claims a long and venerable tradition, although it was invented from whole cloth in 1922. It is based on the following beliefs:

Reiki was founded by a Japanese Buddhist monk named Mikao Usui (臼井甕男, 15 August 1865 – 9 March 1926) in 1922.[citation needed] Many proponents hold that he rediscovered Reiki as part of his search of "sacred texts," but it’s basically a rehash of similar practices such as pranic healing, Qi Gong, therapeutic touch and other hand-waving or laying-on-of-hands therapies that make the patient feel they’re getting paid attention by someone. Today it is considered to be a form of alternative medicine. It is generally considered to be "not a religion" by its adherents, even though some adherents claim that it has Buddhist origins.[1]

From its invention in Japan in 1922, Reiki has split into many schisms (similar to the process whereby religions split into denominations). Like religious denominations, there are far too many to list here, but a few of them include: Usui Reiki (the original); Western Reiki, brought to Hawaii by Hawayo Takata, which most Western varieties spring from; Gendai (Modern) Reiki, an updated Japanese version; Rainbow Reiki, which combines Reiki with chakras; Five Element Seichem, a recent variant from Canada; Kundalini Reiki, another version crossed with chakras, which appears particularly suited to distance learning; The Radiance Technique, which has chakras, seven levels, and was apparently discovered by aliens; and, of course, tantric Reiki, which is just what it sounds like. But very spiritual.

Lama Yeshe (Richard Blackwell), the founder of the Medicine Dharma Reiki (a.k.a. Men Chhos Reiki) schism came under criticism about his claims on the origins of Reiki. Yeshe claimed in his book that he had reconstructed the origins of Reiki from the original writings of Mikao Usui and Watanabe Kioshi Itami (a Usui disciple).[1][2] That Yeshe had access to these writings or that the writings even exist has been disputed since Yeshe has not made them available.[2]

There are three levels of Reiki:

Some Reiki practitioners also claim that their practice can be carried out from a distance, thus obviating any contact save you sending the nice man or lady your credit card number while they heal you from across an ocean.

It’s mostly harmless in itself, except financially. (Or, if you’re a good Catholic, spiritually.[5] Or, if you’re one of the weirder New Agers, it can attack you psychically.[6]) The authorities are having none of it. The Advertising Standards Authority in the UK slaps people upside the head for making any shade of medical claim for Reiki.[7][8]

A 2008 literature review found no evidence of a clinical effect from Reiki.[10] Clinical trials of Reiki divide patients into two groups: a Reiki group, treated by an attuned Reiki practitioner, and a "sham Reiki" group, treated by a person who does exactly the same thing as the real Reiki practitioner, except without having undergone the attunement ritual. Most studies found that Reiki performed no better than sham Reiki.[10]

Edzard Ernst writes of a study giving Reiki (rather than massage) to cancer patients, to zero effect,[11] and suggests that NCCAM needs to stop funding these things.[12]

It hasn't yet been proven to be more effective than meditation, massage, or a nice long snuggle with a loved one.