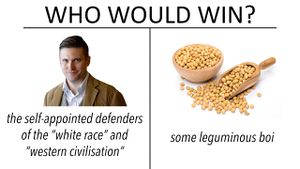 Who needs white genocide when you've got chemicals that turn the freakin' frogs gay?[1]

Soy boy is an insult towards an allegedly feminine or low-testosterone (and therefore unmasculine and unmanly) male. Its meaning comes from the pseudoscientific claim that soy contains estrogens (in fact, it contains phytoestrogens). These phytoestrogens, in turn, are claimed to cause feminization such as breast growth (definitely not) and reduce male fertility (the science isn't yet clear). In reality, because phytoestrogens structurally mimic estrogen, consuming them may block cellular production of estrogen. In short, the reasoning appears to be: "We were saying that red meat is manlier than tofurkey all along. This proves it!"

The cultural obsession or moral panic about excessive soy consumption is largely contained to the West and is frequently lodged by the alt-right against leftist, liberal or other non-right wing males as an indictment of their allegedly low levels of testosterone, feminized features and/or behaviors. However, soy is native to the continent of Asia and has been consumed for many millennia by its inhabitants as a staple in their diets without detriment to health.[3] Also, ironically, beer has actually the most estrogenic phytoestrogen known,[4] despite being viewed in many societies as what "real" men drink.

Soy is making you gay! (WND)[edit]

In 2005, WND contributor Jim Rutz created a 6-part series titled "SOY IS MAKING KIDS 'GAY'" and "THE TROUBLE WITH SOY".[5][6][7][8][9][10] Of course putting GAY in quotes is an implicit admission that soy isn't, in fact, doing any such thing, though given the rampant misuse of quotation marks today it's unlikely people noticed. Rutz alleged that soy is "poison" that is "feminizing":

There’s a slow poison out there that’s severely damaging our children and threatening to tear apart our culture. The ironic part is, it’s a “health food,” one of our most popular.

The dangerous food I’m speaking of is soy. Soybean products are feminizing, and they’re all over the place. You can hardly escape them anymore.

I have nothing against an occasional soy snack. Soy is nutritious and contains lots of good things. Unfortunately, when you eat or drink a lot of soy stuff, you’re also getting substantial quantities of estrogens.

Estrogens are female hormones. If you’re a woman, you’re flooding your system with a substance it can’t handle in surplus. If you’re a man, you’re suppressing your masculinity and stimulating your “female side,” physically and mentally.

Of course, the above is utter bullshit. Soybeans don't contain estrogen -- they contain phytoestrogens, and the difference is important. Rutz continues with a laundry list of complaints, including a claim that soy is the reason we have gays:

Soy is feminizing, and commonly leads to a decrease in the size of the penis, sexual confusion and homosexuality. That’s why most of the medical (not socio-spiritual) blame for today’s rise in homosexuality must fall upon the rise in soy formula and other soy products. (Most babies are bottle-fed during some part of their infancy, and one-fourth of them are getting soy milk!) Homosexuals often argue that their homosexuality is inborn because “I can’t remember a time when I wasn’t homosexual.” No, homosexuality is always deviant. But now many of them can truthfully say that they can’t remember a time when excess estrogen wasn’t influencing them.

These claims failed to catch on the popular consciousness, though Snopes message boards had a good time laughing at it.[11][12]

In 2009, Men's Health contributor Jim Thornton repeated many of WND's claims — except that the "feminization" didn't lead to homosexuality, but just metrosexuality.[13] Thornton alleged that "There may be a hidden dark side to soy, one that has the power to undermine everything it means to be male" — which certainly sounds scientific and not overblown. Thornton continues to recount that "when you consume soy protein, you’re actually courting the Mr. Hyde side of two natural drugs: genistein and daidzein. Both act so similarly to estrogen that they’re known as phytoestrogens (plant-produced estrogens). […] [W]hen humans consume these compounds in high enough quantities, they may experience gender-bending nightmares". Thornton goes on to recount a single instance (that of James Price) in which soy might have been linked to his small amount of breast growth and mood changes. (It could also have been due to the death of his wife to cancer or numerous other dietary changes or almost anything at all, but hey — that doesn't make for a good scare story.)

See the main article on this topic: Paul Joseph Watson

The "soy reduces testosterone and destroys manliness" claim finally got its limelight (soylight?) when Paul Joseph Watson of PrisonPlanet published a video on the subject, seeking to answer that age-old question: "Is soy food turning men into massive pussies?"

Ironically, as numerous Internet commenters pointed out,[15] the supplement "Brain Force" sold by Watson's "gay, reptoid space alien lover" Alex Jones[16] on Infowars contains soy.[17] Watson responded in a follow-up video by stating that Brain Force included Alpha-GPC which he claimed increases libido, and therefore increasing testosterone. He then said that a bit of soy was included in Brain Force just to "balance it out".[18]

Responses from the alt-right were hyperbolic and hilarious:

If one were to take dietary advice from someone, Watson is one of the worst choices one could make. Watson suffers from xylophagia — he eats pages out of books,[29] a type of pica.

Pica is strongly associated with micronutrient deficiency, but the causal relationship has not been established.[30] 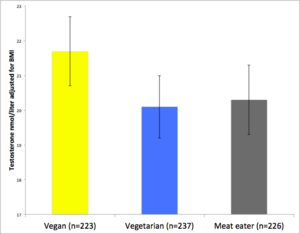 All three of the major isoflavones in soy protein are phytoestrogens. This means they are structurally similar to, but not identical to, the actual estrogens produced inside the human body. Current evidence suggests that these isoflavones activate some estrogen receptors (like real estrogen does), but block other estrogen receptors.[33] What effects, in total, does this have?

Animal research studies into soy are irrelevant to human health,[39] particularly because soy is metabolized differently in humans and in rats.[35]

There's also women who need a balance of testosterone and estrogen, often overlooked due to the denigration of the feminine. If there were convincing research between soy and its increasing estrogen and lowering testosterone, surely polycystic ovary syndrome

wouldn't remain the most common endocrine disorder for women, women would be happily eating more soy and not needing birth control pills to treat their abnormal high testosterone / low estrogen levels. Still, there are a few sites that recommend eating soy as for treating the condition,[40][41] though PCOS Nutrition Center admits that there are not many studies (only 5 published studies) investigating the benefits of soy for these women, though overall concluding that soy is safe for these women. Nevertheless, there has been also overexaggerated dangers of soy's ability to "disrupt hormones" for women as well, generally coming from pro-nature woo, pro-"organic", and "anti-GMO" pro-supplements sites, which generally don't have a good track record on science.[42]

In Thornton's Men's Health piece, he mentions Chavarro et al. 2008's "Soy food and isoflavone intake in relation to semen quality parameters among men from an infertility clinic", which found reduced sperm per milliliter among people who ate any soy than among those who ate no soy at all (after controlling for age, abstinence time, BMI, caffeine and alcohol intakes and smoking). However, all 99 study participants were members of subfertile couples -- rather than a random sample of the population. More importantly, as NEJM Journal Watch notes, soy consumption was not associated with changes in total sperm count, ejaculate volume, sperm motility, or sperm morphology.[43] In short, the study isn't applicable to the general public and its findings have been substantially overblown.

Interestingly, however, more recent evidence (extensively reviewed in Salas-Huetos 2017) does support Chaverro's hypothesis. The literature broadly suggests soy products may have a negative affect on male fertility.[44] Before you chuck the tofu, however, note that Salas-Hueto document a substantial number of associations between food and fertility – in particular, high consumptions of meat also appear to reduce fertility. 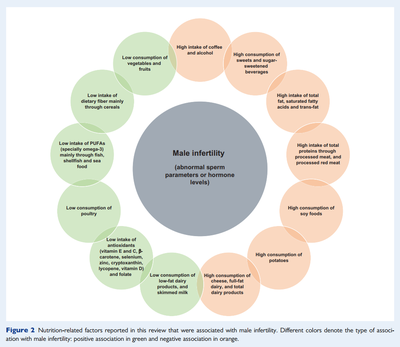 One should further be cautioned that virtually all of these studies are observational rather than experimental. Instead of getting a random sample of the population and artificially increasing or decreasing their soy or isoflavone intake, researchers instead observed the current health and current diets of a subset of the population. It could easily be that men who like eating meat and tofu have lower fertility for other reasons.

On the flip side, soy protein isolate[note 1] is a fairly popular source of protein for bodybuilders. Ironically, the earliest examples of soy panic came from the online bodybuilding communities, many of which promote questionable ideas on how to train.