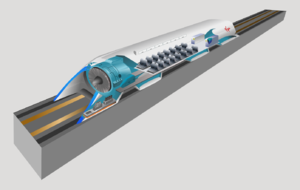 Artist impression of a dream.

The Hyperloop is a proposed "fifth mode of transport" (the other four being planes, trains, cars and boats)[notes 1] that was unveiled by Elon Musk in 2013. It involves a tube evacuated to very low pressure in which pods are propelled forward, using magnets, at speeds in excess of 1000 km/h. In essence it is a pneumatic tube on steroids or a magnetically levitated train inside a vacuum tube. Whether or not the Hyperloop proposal will come into fruition remains in doubt.

So how is this supposed to work?[edit]

Most of an Earth-bound vehicle's energy is used to counteract the forces of friction, gravity and atmospheric drag. Without these, anything moving keeps moving indefinitely. So the idea is you remove the atmosphere, and use some system to levitate the vehicle slightly above the ground. Existing maglev

trains levitate using magnets. The original design of Hyperloop used an air cushion instead, though recent Hyperloop designs use a combination of maglev and a partial vacuum. Both designs require a tube that is airtight for hundreds of miles[notes 2], and a vehicle that is airtight as well. In the event of a catastrophic failure of either capsule or tube, the low pressure will of course become a huge problem. If the tube gets punctured, a lot of air is going to collide at very high speed with the capsule. If the capsule is punctured, all the air will be pushed out, leading to depressurization. Musk's proposal calls for oxygen masks, but these aren't foolproof, and won't help with the other issues experienced in a depressurization accident, like water on exposed body parts (eyes, mouth, airway) boiling away. Depressurization can, as many people know, occur in aircraft accidents, but aircraft can quickly descend to a safe altitude if this happens. You could design a system to repressurize the tube in the event of an accident, but this adds more complexity, as well as the possibility of it malfunctioning, which is a Bad Thing if it happens while a capsule is traveling through the tube.

Musk's proposal calls for relatively small capsules seating less than 30 people, but headways[notes 3] as short as thirty seconds. A 30-second headway is something even modern subways don't do, mostly because loading and unloading passengers takes longer than that and also due to safety considerations (30 seconds is just not enough to safely stop if the vehicle in front of you stops). Of course the loading and unloading problem could be solved by having several parallel loading areas (i.e. platforms) that somehow merge to the main tube, but Musk does not really answer the question of how exactly merging and branching would work either.

So does this actually work?[edit]

In short: it wouldn't. While some of the inherent design problems might be fixable, their combined magnitude would make it an economic impossibility to build. And that's before you take land costs and other minor details into account. [2] And that's not even getting into the political difficulties behind getting large scale infrastructure built, especially in the U.S. Then there are the engineering problems like dealing with the capsules heating up from air compression (as the tube will not be a total vacuum), or the tube needing sub-millimeter tolerances. Sub-millimeter tolerances are not that difficult to achieve, but doing so is expensive and maintaining it over hundreds of miles is a major headache. Oh, and then you have to deal with earthquakes, or even just simple thermal expansion of the tube and capsules. And it's unclear how the proposed thirty-second headway is supposed to work with the proposed 0.5g braking deceleration, given that at the proposed top speed of 1220 km/h there is not enough space or time for a capsule to brake before it slams into a capsule that experienced catastrophic failure in front of it. Not to mention that even at the blatantly unrealistic headways Musk proposes, Hyperloop would have a capacity less than a third that of high speed rail.

Also Musk's proposal envisions building a system not directly between downtown LA and downtown San Francisco, but instead from Sylmar to somewhere in the East Bay, which means you still have pretty much the same problems as with air travel. The ride itself is supposed to take only half an hour (at Musk's fantasy estimates), but unless that precise suburb is your final destination you will spend an hour or more getting to your actual destination. There is a reason why HSR (high-speed rail) kills competing air service even at two hours' travel time. You see, land downtown is expensive. And more people who could have stilts in their front yard means more NIMBYs trying to derail your project. California HSR costs as much as it does in part because it goes downtown instead of considering getting people to their final destination "someone else's problem". To add insult to injury, Musk plans to include TSA-style nut-grab brigade security theater, so taking the Hyperloop instead of Southwest won't even spare you that.

What was Musk's intention in promoting this?[edit]

First of all, the proposed route links—by sheer accident of course—the place in LA closest to Musk's home to the place in the Bay Area closest to Musk's workplace. And given the way Musk bashed California high speed rail when he announced his project, it is not unreasonable to assume that part of his intention was to keep the latter from getting built.[3] Unsurprisingly, a favorite line of attack by anti-HSR people in California has become "bla bla bla Hyperloop is cheaper bla bla Hyperloop is better bla bla Elon Musk is a genius".[notes 4] Of course the fact that Elon Musk is currently selling cars

has nothing to do with any of this.Do You Believe That?[4]

In March, 2018, the city of Cleveland, Ohio, inked a $1.2-million feasibility study of the construction of a 340-mile Hyperloop line between it and Chicago, Illinois. Not surprisingly, critics voiced their concern that the technology does not even exist yet, which Hyperloop Transporation Technologies admits. On the bright side, if investigators conclusively show the proposal to be unrealistic, it could potentially pave the way for the construction of a high-speed rail network in the Midwest,[notes 5] currently in need of an economic stimulus.[5] 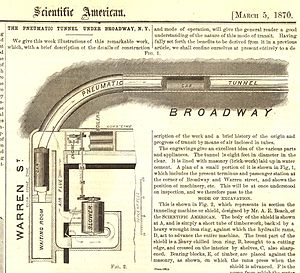 As you may know, similar proposals have been made in the past and some have actually gotten built, be it a subway line

in New York, a tourist gimmick

in London (which both got built) or Vaporware

in Switzerland (which didn't). If you notice a trend in none of them managing even five years of operation, you might be on to something. However, the idea of a vactrain

has been suggested as a possible future replacement for high speed rail and airplanes (with minor practicality issues related to putting a space shuttle inside a giant inside-out space station with the tiniest leak in either meaning everyone dies horrifically). Therefore, there are some who argue that Musk's idea is good (if not all that original) but just too far away from realistic completion to be of any use now. This dramatically contrasts with high speed rail or even Transrapid

In October 2018, Hyperloop Transportation Technologies (Hyperloop TT) unveiled its first full-scale Hyperloop capsule in Spain. The capsule is made out of a composite material called Vibranium (after the fictional Marvel supermetal, because of course), 82 carbon fiber panels, 72 sensors, 75,000 rivets and 7,200 square meters of fiber. Hyperloop TT will next send it to France for additional testing and optimization before letting it run on commercial tracks.[6]

On April 17, 2019, a U.S. federal agency released a roughly 400-page report detailing its in-depth investigation into the extent of Russian influence in U.S. Politics human and natural environmental impacts of Musk's proposed 35-mile loop between Washington, DC and Baltimore, MD.[7] Its contents reveal a much more scaled-back, not-so-"hyper" version of the Hyperloop originally envisioned. Rather than speeding commuters between the two cities along at 1200 kph in a vacuum-sealed Vibranium pod, the proposal outlined in the draft Environmental Assessment describes driverless, battery-powered vehicles being lowered into one of two ventilated tunnels, and travelling down them at 240 kph for a ~15 minute journey. Due to station capacity limitations, usage would be initially capped at approximately 1,000/day, roughly the equivalent of a single double-decker MARC train (which, in comparison, takes about 55 minutes to make the same journey with five additional stops, and is one of several train and intercity bus routes already between the two cities). There is no official cost estimate as of writing, and approvals are still required from a half dozen agencies and state DOTs, so prospects are still shaky for the project.

While some, like Maryland governor Larry Hogan, are gung-ho about the project, others are not so on board. Virginia Chief of Rail Transport Michael McLaughlin, after being taken on a demonstration ride in the California test track, noted that it was basically just "a car in a very small tunnel."[8]