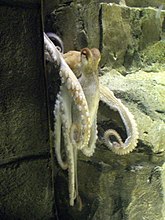 Paul joins the ranks of the dead unemployed.

Paul the Octopus (German: Paul der Krake), was a common octopus Octopus vulgaris from Germany's Sea Life Centre in Oberhausen. According to many tabloid reports, Paul was a psychic sport-predicting animal.

Hatched in Weymouth, England (2008) to two loving parents, Paul's main claim to fame was his alleged ability to "predict" football match results, in particular matches concerning Germany, beginning with the UEFA Euro 2008 tournament, in which he called the right outcome four out of six times.[1] The octopus "picked" winners by selecting, opening, and entering a transparent plastic box with a hinged lid, in which a country's flag is placed along with a parcel of food made from either mussels or oysters. His purported oracular activities then received worldwide coverage during the 2010 FIFA World Cup, in which he predicted eight out of eight match results.[2] Statistically his career overall record is 12 correct picks out of 14 matches or 0.86 (where 1.00 is equal to 100% success). Comparably, flipping a coin one hundred times for heads or tails will give a result close or equal to 0.5. The probability of picking 12 successful out of 14 attempts is 1 in 180.[3]

Paul's predictions did not occur in a controlled environment. The lack of controls could result in potential bias and the possible skewing of results. Even though the boxes are of equal shape, size, and weight, he may at any one time be in a different area of his tank when they are lowered into the water. For example, during the selection for the 2010 Word Cup final, Paul was already floating in the corner of the Spain box, and may have simply gone for the first box in reach.[4] During the World Cup, Paul picked six out of seven boxes to the camera/viewer's right. Only two boxes are ever lowered for each prediction. He was never tested with multiple boxes, or with boxes that are not transparent.[5] It may simply be a lucky run — in a similar box set-up, a Dutch female octopus called Pauline selected a different team (the Netherlands) to win the 2010 World Cup final compared with Paul's selection (Spain).[6]

Attraction to hues and shapes[edit]

From the bottom up: mustard, ketchup, and burnt sausage.

The common octopus is colour-blind but they are attracted to levels of brightness and horizontal shapes.[7][8] Paul has a strong tendency to pick the German box (OMG nationalism!) — he did so in all of his 2008 predictions, and in five out of seven opportunities in 2010. Moreover, all of the boxes picked by Paul have flags that are relatively bright in colour and/or have simple horizontal fesses (stripes), namely Spain (2 picks), Serbia (1 pick), and Germany (11 picks) — and it may be coincidence that these happen to have the statistically better football teams. Germany and Spain, in particular, have very strong football teams that win much more often than not, and if Paul is biased towards selecting them on the basis of colour, he'd get more hits than one would expect based on genuine random chance. In addition, Octopuses are also equipped with more than 10,000 sensitive chemoreceptors on their tentacles and lips,[9][10] which are capable of detecting small variations of chemicals in the water, and possibly on residues left on and in the boxes - which may attract him.

So really, it's not a case of whether Paul is psychic, but whether his owners or traditional flag designers are!

Paul's manager keeper announced his retirement from predicting on 12 July 2010,[11] despite offers from punters to buy him and a career in Hollywood. Paul died in October 2010, cueing several funny/tired "I bet he didn't see that one coming" gags.[12] Inevitably, the early death of such a celebrity has spawned a conspiracy theory — in this case, that he actually died the previous July, and had been replaced by a double,[13] bizarrely echoing a previous "Paul is dead" theory.

Prior to his death, Paul backed England's bid to win the 2018 World Cup hosting rights. They lost out to Russia. His winning streak was over.