Bisexuality (also known as swinging both ways, or playing for both teams) refers to romantic and/or sexual attraction to two or more genders, or including one's own gender as well as at least one other (this also includes "all genders" – bisexuality is contrasted with, or added to, pansexuality in self-identification terms), or simply both physical sexes.

Contrary to popular belief, bisexuals rarely are attracted to all genders equally, and normally have some form of preference. For example, a person may be happy to have homosexual encounters for fun or just sex, but not as a relationship. The Kinsey scale, developed by sex researcher Alfred Kinsey, provides for these sort of variances in attraction for one sex or another; 7 points ranging from purely heterosexual at 0 to purely homosexual at 6, with 3 in the middle. Although this is a quite simplified model and does not take into account several exceptions (such as the "I'd go gay for..." game), non-binary genders, fetishes, and the like, it works well enough to indicate preferences, and show people that sexuality is not a binary.

Bisexuality can also refer to a spectrum that includes polysexuality (attraction to many but not all genders) and pansexuality (attraction to all genders and genderlessness) – be it alloromantic, aromantic or in the form of one among several possible kinds of gray-aromanticity –, biromantic, polyromantic and panromantic asexuals and other orientations in the asexual spectrum, people of unnamed queer identity who do not identify with any of the cited labels but feel attracted to more than two genders (simultaneously or not), as well as all orientation identities other than the monosexual ones, heteroromantic heterosexuality and homoromantic homosexuality. (Furthermore, many people who identify as hetero, gay or lesbian, are also not static and limited to a single gender in their range of sexual, romantic, sensual, etc. attraction, and those are often counted together with the aforementioned groups in bisexual sensu lato.)

Bisexual people (both the identity and the larger spectrum) who have preferences to men (cis or trans, and often including transmasculine non-binary people) might be described as leaning mascsexual/massexual or androsexual/androphilic, those who have preferences to women (cis or trans, and often including transfeminine non-binary people) might be described as leaning femsexual or gymnosexual/gymnophilic, and those who have a strong preference to people who identify with non-binary (neutrois, androgyne, aliagender, genderfluid, etc.) and non-Western (hijra, Latin American travesti, kathoey, fa'afafine, etc.) genders, and who might additionally feel attracted to androgynous/gender-neutral aesthetics, might be described as skoliosexual (from Greek skolios, "bent/tortuous", referring to the "queer" as opposed to "straight" in genderqueer, a common identity for people of all non-binary genders that are not tied to cultures that precede the modern Western social construct of trans people).

People can identify with more than two orientations, such as bi-pan, bi-poly, bi queer, or identify as bi but self-refer casually as gay or lesbian.

Of course, again, if one defines sexuality as attraction to physical sex, rather than gender identity, much of the above changes or loses meaning. 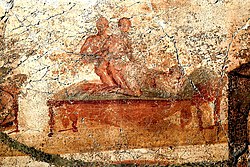 People of any gender, or identity related to the absence of gender, might identify as bisexual.

The commonsense in Western cultures on the matter so far has maintained that cis women are more likely to be bisexual than cis men.[note 1] However, this may be due to the fact that bisexual women are more "socially acceptable" than bisexual men in the modern world. It is certainly true that whenever the word "threesome" is bounced around in popular culture it commonly implies that the third person is female. Many bi women and their feminist/pro-feminist allies are unsatisfied with this notion, as they believe that a fetishized, objectifying visibility is not at all a positive one, and that many attitudes to bisexuality reflect the way attracting cis heterosexual male attention is often seen as the sole or main function of female sexuality.

Some detractors of bisexuality believe (a stance generally considered incorrect by sex educators and psychiatrists, not to mention bisexuals themselves) that bisexuals are wrongly motivated, or do not exist. They suggest bisexuals may be homosexuals in denial, or homosexual or heterosexual but too confused to admit either way, or heterosexuals seeking the social benefits of homosexuality, or heterosexuals going through an experimentation phase. These negative attitudes often come just as much from the "gay community" as they do from the "straight community", and thus B in LGBT can often be a very separate issue to the others.

In the United States, bisexuality is almost completely absent from the national discussion and the media. A bazillion tabloids will speculate as to whether thus-and-such celebrity is gay, but would never even bother considering the possibility that said celebrity may be bi. Mainstream LGBT movements often acknowledge solely homophobia, without giving the proper attention to bi issues such as monosexism/biphobia and bi erasure, as well as other prejudices that permeate attitudes to gender and sexuality, such as allosexism/acephobia, amatonormativity/arophobia, cissexism/transphobia, binarism, dyadism/intersexphobia.

The deceased Joseph Nicolosi, Ph.D., in his book Reparative Therapy of Male Homosexuality; a clinical approach,[1] seemed to advocate for a very similar scale to Kinsey's. He states, "Each individual falls somewhere along the heterosexual-homosexual continuum, possibly moving from one direction to the other during different life stages." This heterosexual-homosexual continuum is remarkably similar to Kinsey's, and suggests that reparative therapy does not actually change the sexual orientation of homosexuals, but rather changes the activities of bisexuals, a theory supported by follow-up studies.[2]

Bi-curious is a term mostly used in personal ads by people who feel that while their primary orientation is heterosexual, they would be open to an experimental homosexual relationship if a suitable partner turned up. Motives range from "I'm gay but yet to admit it to myself" through "I've got this itch that just needs scratching" to "My partner wants to try a menage a trois".

There is an implication that someone using the term bi-curious is not looking for a long term relationship.

It might be used to denote a homosexual person looking to experiment with heterosexual sexual relationships, but the above is the general implication. Since society has historically frowned on homosexuality, most if not all homosexuals seriously examined themselves for any heterosexual leanings before coming out of the closet.

Some hetero women (at least, in Western countries) are admitting to being "barsexuals", a term used to describe girls who make out and fool around with other girls at bars to activate the imaginations of cis heterosexual guys and/or free drinks (in other words: attention seekers).[3]

This is an issue of controversy within the bisexual community, as some see it prevents self-identified bi women from being taken seriously and contributing to them ending up being accused of just trying to entice men, while others encourage people to experiment with their sexuality and identity as they please, and get thrilled that it is now socially acceptable and safer as an experience.

Given how both female and male sexuality is often seen as slanted to the mascsexual spectrum, with a common biphobic perception being that bi men and women are really adventurous gay guys and hetero women, it is often seen as an indicative of how male sexuality is centered as what defines the experiences, perceptions and labeling one receives before society, essentially neglecting that orientation identities are not about sexual practices in themselves, and that not everything romantic or sexual one does is about the men.