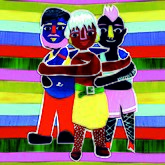 Queer is a blanket term that is generally used to refer to the set of any sexualities or genders that deviate from the social norm of cisgender heterosexual (and may also include intersex people). It is, in many cases, considered to be preferable to the "LGBT" family of terms, as it is all-inclusive and does not force specific (and likely imprecise) labeling.

Saying "queer" is a lot easier than trying to remember or say LGBTQIAP2N+ for the community. It can also be a handy self-identifier for people who are still questioning or prefer to keep the exact nature of their identities private.

"Queer" is an example of a reclaimed word: the term was almost exclusively derogatory in the past, and has only recently become an acceptable term, at least within certain linguistic contexts (comparable to the reclamation of "nigger"). The extent to which that reclamation has diffused into the larger linguistic context of the population at large is an open question. One notable feature of the word "Queer" is that, unlike other reclaimed slurs such as "nigger," "fag," "dyke," and "slut," it has also been entirely repurposed as a term of art with specific meanings, and it has even begun to see some academic usage. It's also an example of language evolution in action; the current sense has only been widespread since the early to mid 1990s or so, and before that almost always referred exclusively to gay people.

The existence of queer theory (as a field of study) and Queer Eye for the Straight Guy (as a TV show) should give you an example of just how much the word has been reclaimed. For the most part, there's no problem with straight and cis people using the word "queer" to describe someone (as long as they aren't being jerks of course).

The term is also sometimes used as a self-identifier by those who wish to tie their sexuality to a radical critique of society and maintain an outsider status. Implicit in the latter usage is a rejection of the mainstreaming of gay sexuality into the broader society and its expression in heteronormative, racist, sexist, or capitalistic contexts, or the prioritization of issues such as same-sex marriage and military service by the LGBT+ community, viewing these campaigns as legitimizing institutions or entities to which they are opposed. This is especially so when such campaigns exclude transgender, polyamorous, runaway and "criminalized" queer youth, and other alternative sexualities, thereby keeping them on the margins. When mainstream movements, organizations, and political currents leave these identities, individuals, and groups out in the cold, it should come as no surprise that many would embrace more radical politics outside the mainstream. For example, consider these quotes from the Queer Nation Manifesto, first distributed at a gay rights march in 1990 by ACT UP activists:

The above paragraph, notably, raises a caveat to the use of "queer" as an umbrella term for the "alphabet soup" (LGBTIQ...): to the extent that "queer" refers to a specific subculture defined above, it may become, or already be, as inappropriate an umbrella term as "gay", and for the same reasons. The evolution of the term's usage is in flux, but large numbers of people in the LGBTIQ... communities do not identify themselves as "queer", which suggests that the umbrella-term usage of "queer" may not be likely to persist. Still, there are those who feel the term fits their identity or the needs of their broader community better than any other, even if they don't necessarily subscribe to a deeply radical worldview, so the future of the term's usage remains uncertain.

Like any other reclaimed slur, if someone doesn't want to be called queer, then don't force it on them.

There is a shrinking, albeit still existent, contingent of absolutists who reject its reappropriation entirely, believing it can never be separated from the pain and harm its former usage has caused. Considering the extent of its reappropriation in comparison to other terms, the ever-increasing passage of time, and the strong evidence for linguistic evolution in general, it could be argued that this is a denialist position, as it seems to suppose that the word could not undergo any semantic shift whatsoever. Unsurprisingly, the position that the word "Queer" is unconditionally offensive regardless of context and cannot be reappropriated tends to be more common among the older generation of activists than the younger.

Insulting and mocking queer people has become popular with TERFs and ace exclusionists.