A logo for a space program NoFap. 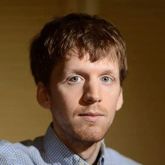 "[A] phenomenon of the brain marked by compulsive use of pornography which proves difficult to stop despite negative consequences, and which often worsens over time.

"This talk contains several assertions that are not supported by academically respected studies in medicine and psychology. While some viewers might find advice provided in this talk to be helpful, please do not look to this talk for medical advice."[17]

According to an obituary published by his family (he passed away in 2021), Wilson "taught human pathology, anatomy, and physiology for years and [had] long been interested in the neurochemistry of addiction, mating, and bonding."[18] He was also the posthumous recipient of an award from the National Center on Sexual Exploitation (NCOSE),[19] formerly known as Morality in Media, an "anti-pornography group"[20] founded by clergymen which recently tried to force OnlyFans to remove sexually explicit content from their site.[21]

However, other sources have claimed that Wilson had "no scientific training or background",[22] and "made a career peddling pseudoscience and speaking about pornography addiction".[22]

Psychologist Jason Winters, a lecturer on human sexuality at the University of British Columbia, was unequivocal in his response to Wilson's assertions:

"Wilson is simply presenting his ideology as fact [...] and in this case, it's dangerous."[23]

So what do actual scientists make of such claims?:

"[W]henever you hear someone talking about anything rewiring the brain that's an immediate red flag – that's not how the brain works."

"Do these results mean that compulsive viewing of pornography is an addiction like dependence on cocaine or heroine? [sic] No, and Voon is keen to emphasise this point in both the published article and the press release issued by Cambridge University. Addiction can’t be diagnosed with a brain scan, and even if it could, we still don’t know enough about CSB [compulsive sexual behaviour disorder] for it to be recognised as an addiction in mainstream psychiatry.

Do the results tell us that online pornography itself is addictive like a drug? No. Do they say anything at all about the non-compulsive viewing of pornography? No. Do they allow us to conclude that pornography “damages” or “changes” the brain in any harmful way? No. Do they even translate to all sufferers of CSB? No – the study tested a small sample of men only and, in any case, we can never draw strong conclusions from a single study alone."[26]

Despite the fact that "there isn't much scientific research to support Wilson's claims",[27] the symptoms that he described "align with the anecdotal evidence"[27] of many NoFappers.

Although NoFap touts itself as secular, a lot of the scientific claims they make are also repeated by Fight the New Drug, a group founded by Mormons[28] which has been repeatedly criticized for peddling pseudoscience[29] and purposely misrepresenting the results of studies.[30]

On such websites, "[t]he claims and studies cited are, more often than not, poorly designed, suspiciously funded, misleading, incorrectly derived, or just outright false".[22] One of these studies was even co-authored by Wilson, and attempted to link internet pornography to erectile dysfunction ("pornography-induced erectile-dysfunction (PIED)"):[31]

"The researchers based this assertion on a quick literature review and all of three case studies [...] From such a small sample, no scientifically valid conclusions are possible. [...] [I]n my opinion, their analysis [was] scientifically irresponsible."[32]

Other studies have thoroughly debunked this assertion:

Number of deaths caused by tobacco use each year: 8 million[35]

The American Psychological Association stated that "when the fifth edition of the Diagnostic and Statistical Manual of Mental Disorders (DSM-5) was being drafted, experts considered a proposed diagnostic addiction called hypersexual disorder, which also included a pornography subtype."[36] Eventually, in 2018, a behavior called "compulsive sexual behavior disorder"[37] (CSBD) was included in the World Health Organization's International Classification of Diseases guidelines (ICD-11). However, it is important to recognize that this behavior can only be classified as such when it is an impulse control disorder, where the activity interferes with normal social functionality, and thus can be seen as similar to other impulse control disorders, including a few others that are sometimes labeled "addictions" in popular culture (such as compulsive gambling), and many others that do not (such as trichotillomania, or compulsive, excessive hair pulling).[38] Whether compulsive behaviour "can or should be described as an addiction is far from supported or accepted."[39]

Higher than normal frequency in itself, or being into sexual activities that violate the current cultural norm, are not qualifications for a diagnosis of CSBD (indeed, psychological researchers urge caution with this diagnosis due to fear of overpathologizing normal sexual behavior.). There is no scientific justification for NoFap's reasoning for "pornography addiction" (it is "more available", "more novel", and "more stimulating" than "primitive sex"[40] — all subjective terms). Indeed, the general consensus is that masturbation is a normal, healthy activity (except when compulsive to the point of harm).[41] Studies do acknowledge that the concept of "pornography addiction" does exist within this impulse control disorder behavioral framework; there is considerable debate on whether or not "addiction" is a proper term.[42][43] However, proponents of the "addiction" term, like Dr. Donald L. Hilton, do not help their argument when they falsely accuse individuals that do not believe the term "addiction" is accurate of "personally appear[ing] in pornographic films, attend[ing] the Adult Video Network awards, and molest[ing] children in [their] laboratory", suggesting perhaps that Hilton's Mormon background may have more influence on some of his conclusions than anything based on neuroscience .[44]

Whether or not the term "addiction" is applied, it must be understood that the behavioral effects of pornography — while hotly debated, with a wide range of purported positives and negatives[45] — are not ordinarily "addictive" outside of those with impulse control disorders. Furthermore, some of the reluctance of researchers to use the term "addiction" perhaps stems from evangelical misuse of the term "pornography addiction" over the last several decades.[46]

NoFappers claim that sex addiction shows similar patterns to those of a cocaine addict. With actual drugs, each use should be desensitizing; however, this pattern was not found in the so-called sex addicts. In one particular study of "sex addicts", these individuals showed an increased response to erotica that was relatively higher compared to normal individuals. In fact, these so called "sex addicts" have matching brain patterns to those with high libido who don't identify as "sex addicts". The study deemed that there is no neural evidence for porn addiction.[50] On the contrary, NoFapper's anecdotal evidence clearly has more authority than actual scientific studies.[citation NOT needed]

"Debating with them is akin to debating Genesis with an evangelical," Ley said, adding that belief isn't a substitute for evidence. "Like all true believers, they want to shout at the people they disagree with until they give in."[54] 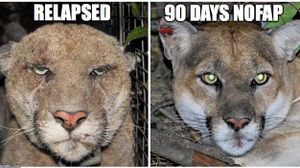 How it supposedly works.

The alt-right group known as the Proud Boys has a "no wanks" requirement as part of its hierarchy (second degree).[56] Rhodes also has appeared on a podcast with the former leader of the Proud Boys.[57]

The theme of nocturnal emissions exposes many of the problems inherent with NoFap "knowledge". A whole range of rather differing opinions on nocturnal emissions pepper the NoFap-o-verse. Opinions range from the "you cannot do anything about it so don't beat yourself up about it" (was there a pun intended?) to the judgmental and shaming view that "nocturnal emissions are your fault cause you aren't controlling your dreams" or at least controlling your lifestyle or diet choices that lead to wet underwear. In the extreme end of the surreal, one should correlate what food leads to wet dreams and stop eating that food. For many, a noctural emission is no different to having a wank, you've remitted and are a pornoholic again and must start over. The speculative nature and wide variety of takes on the issues reveal how factless much of NoFap knowledge is. One of the most recurring themes on nocturnal emissions is the sense of shame for having a wet dream, a symptom of a larger sense of self-hate for not being able to resist natural sexual urges. Interestingly enough, in many of the discussions hosted on Reddit and NoFap comment boards, there tends to be a lot of empathy and emotional support among NoFappers helping one another through not just nocturnal emissions but all of their "failings" in getting control over their so-called porn addictions and accompanying sadness.[citation needed]

It is possible that a portion of NoFap users experience the Post Orgasmic Illness Syndrome symptoms but are not aware of it being a disorder and believe it to be due to the sexual activities themselves and therefore when they abstain their symptoms decrease which they interpret as the NoFap superpowers.