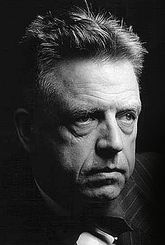 Alfred Kinsey (1894-1956) was brought up by strict conservative Christian parents, but rose above that limitation to use his mind anyway. In adult life he decided to study the realities of sexual practice and culture, with the aim of de-mystifying the whole shebang. He succeeded admirably and in doing so brought the wrath of the conservatives down upon himself, because conservative Christians do not like people who do their own thinking — and especially despise those who produce actual science that refutes long held, but completely unsupported traditions.

He is perhaps most famous for the Kinsey Reports. It was published in two volumes, the first being Sexual Behavior in the Human Male (1948) followed by Sexual Behavior in the Human Female (1953). James H. Jones writes in his Pulitzer Prize nominated biography of Kinsey[2] that some of the data in Kinsey's research came from “a predatory pedophile. Over the course of his long career as a child molester [a man known as Mr. X] masturbated infants, penetrated children, and performed a variety of other sexual acts on preadolescent boys and girls alike. Betraying a huge moral blind spot, Kinsey took the records of Mr. X’s criminal acts and transformed them into scientific data."[3] Data on child molestation was in fact included in the Kinsey report on men. Furthermore, Jones also reports Kinsey had a "benign view" of pedophilia, with a colleague reporting "[Kinsey] would always tell us [...]that pedophilia wasn’t as black as it was painted, that it could be, under proper circumstances, beneficial or something like that”.[4]

He also created the Kinsey scale, a broad measure for defining sexual orientation, and founded the Kinsey Institute (originally known as the Institute for Sex Research) at Indiana University.

Perhaps unsurprisingly, he was also bisexual.

He was portrayed by Liam Neeson in the biopic Kinsey.

In 2011, then-U.S. Republican Presidential Nominee Candidate Michele Bachmann claimed that the Kinsey Reports were "myth" and had been for a long time,[5] unlike other books she mentioned being a big fan of.

This sexuality-related article is a stub.
You can help RationalWiki by expanding it.
Retrieved from "https://rationalwiki.org/w/index.php?title=Alfred_Kinsey&oldid=2463300"
Categories:
Hidden categories: