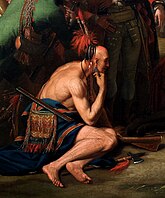 Idealized Native Canadian portrayed in The Death of General Wolfe by Benjamin West.

The noble savage is a common, romanticized stereotype of various indigenous peoples. The visual trappings and associations change depending on the culture, but the underlying idea is constant. The noble savage is portrayed as ignorant and simple-minded but simultaneously uncorrupted by any of the moral failings of modern civilization and possessing an innate wisdom and connection to nature. Thus, there is often a paradoxical quality to the way the stereotype is presented — in one way, the life of the noble savage is desirable because of its simplicity but pitiable for its backwardness. An ultra-romanticized version of the trope often forms the basis for "state of nature" political theories, such as anarcho-primitivist writings (such as those of philosopher John Zerzan), where humans lived in an ideal, classless, totally egalitarian state until "the fall" of man, aka civilization. As a result, these often read like the Garden of Eden myth without the God and snake Satan snake bits. The stereotype has its origins in European imperialism. It is often mis-attributed to Jean-Jacques Rousseau.[1] In reality, the first use of the term dates back to John Dryden's play The Conquest of Granada:

It was at least prefigured by the Roman historian Tacitus

, who wrote in the Germania, about the Teutonic peoples:[3] 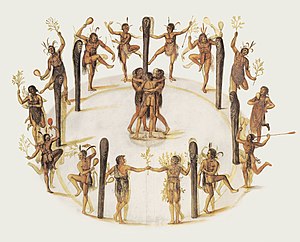 The primitivist movement of the early 20th century in art sprang from the concept of the noble savage and an attempt to return to a pre-civilization golden age. The primitivists were inspired by sculptures and other ceremonial and artistic pieces that were imported from European colonies in Africa and the Pacific. Paul Gaugin famously left Europe to live with the native Tahitians. Pablo Picasso drew heavily on African styles in his early primitivist art and this carried over into his cubist phase.[7]

The noble-savage stereotype is generally considered racist, ethnocentric, or (at the very least) culturally insensitive - due to its association with a long history of imperialism, colonialism, and scientific racism which attempted to "prove" that indigenous peoples were biologically inferior to whites.

A good deal of colonial histories and perceptions of indigenous people were based on myths, legends, and pseudohistory. In North America, James Fenimore Cooper's The Last of the Mohicans, while it became a literary classic, helped to spread the noble-savage stereotype.[8] In modern times, Disney's appropriation of Pocahontas (1995) is an example of a pseudohistorical account of Native Americans (though the filmmakers had the decency to admit they wanted a legend rather than a biopic, and to cast Native voice-actors). Post-colonial historians and anthropologists have attempted to revise and dispel these stereotypes.

was a common occurrence, often unrestrained by norms against harm to non-combatants or against their enslavement. The environmental damage inflicted by indigenous cultures was often limited only by their technological capacity;[9] indeed, some scientists have advanced the theory that when most of the population of the Americas was wiped out by European diseases, the resulting collapse of agriculture brought about the Little Ice Age.[10] The perception of Native Americans as more connected to nature is also born from a fallacy of association: most of the survivors of colonial plague and genocide abandoned flourishing cities and settlements. The most notable examples are the Aztec and Inca, but other examples include the Marajoara culture of Brazil and Cahokia.

On the flip side, though, there is also a "myth of the myth" of the noble savage. Racist 19th-century anthropologists such as John Crawfurd

Use in woo, marketing, and marketing woo[edit]

Well-meaning entrepreneurs - especially New-Age aficionados - often use noble-savage stereotypes to sell woo, especially nature woo, due to the perception that indigenous people are more "in tune" with nature or have some ancient and secret knowledge. Because many Native American tribes regarded crystals (especially quartz crystals) as ceremonial or sacred objects, crystal healing invokes this trope often. As some tribes consider certain rituals too sacred to divulge to outsiders, crystal healers have the opportunity to advertise their junk with slogans about "previously undisclosed information from tribal elders".[note 4]

Stereotypes of conveniently remote and little-known hunter-gatherer societies help fuel things such as the urban caveman movement, the paleo diet and some broscience.

Slapping a noble savage image on a product or ad, as in the infamous 1970 "crying Indian" ad,[12][13] is a common method of invoking a sense of "heritage". Sex may sell, but guilt and nostalgia sell too. "Madison Avenue" aims certain products, such as the "Nike Air Native" shoe, at indigenous peoples.[14]