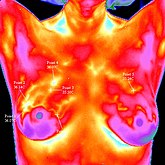 A promotional infrared image of breasts by Philip Hoekstra claiming to show cancer in the right breast.

Breast thermography has been promoted by CAM clinics as a breast imaging technique for cancer screening. This is not scientifically validated. The American Cancer Society says:

Thermography has been around for many years, and some scientists are still trying to improve the technology to use it in breast imaging. But no study has yet shown that it is an effective screening tool for finding breast cancer early. It should not be used as a substitute for mammograms. —American Cancer Society (emphasis added)

Initial studies found it to be less useful than either mammography or clincal examination,[1] and skeptics have noted that sites promoting breast thermography carry the "quack Miranda warning" that claims have not been evaluated by the FDA.[2] Health Canada has issued "cease and desist" orders to clinics offering breast thermography as a claimed cancer diagonstic.[3] Scott Gavura of the Science Based Pharmacy blog describes breast thermography as "worse than useless" based on currently available evidence.[4]

The FDA has issued a public warning notice stating that breast thermography is not an alternative to mammography[5] and has ordered Joseph Mercola to stop making excessive claims for thermography.[6]

Thermography is promoted by Mercola, CANCERactive, NaturalNews, Christiane Northrup[2] and other known cesspits of disinformation.

The Wikipedia articles on breast thermography

were both started by user Philiphoekstra. This is in fact[7] Dr Philip Hoekstra, director of FirstSense Medical, a manufacturer of breast thermography equipment, who is a proponent of breast thermography for cancer screening and whose work is endorsed by the likes of Debby Bruck. Sadly the FirstSense Medical device is currently under development and is not available for sale within the United States or any other country.[8]