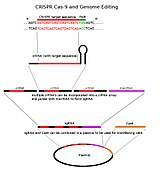 Clustered regularly interspaced short palindromic repeats, or CRISPR, are segments within the prokaryote genome that contain repetitive sequences, each separated by a unique "spacer" sequence. Together with Cas proteins, CRISPR is fundamental for viral immunity of prokaryotes, and relatively recently has been used for genetic engineering to make exceedingly precise alterations.[1]

In prokaryotes, CRISPR and the associated Cas9 proteins serve as an immune system. When a bacterium survives an infection by a phage, Cas1 proteins cleave a short sequence of the viral DNA, which is then inserted between the repetitive sequences of the CRISPR locus, becoming a new "spacer" sequence. Whenever an infection of the same type of phage happens again, the stored genetic material is transcribed as crRNA, associating with tracRNA, which links it to the enzyme Cas9. When crRNA recognizes its antisense viral strand, Cas9 cleaves it. Since the viral DNA has been incorporated into the genome, the descendant strain also contains the immunity.

TL:DR If a bacteria is attacked by viruses and it survives. It will take part of the virus' DNA and put it in it's own DNA. Now if that virus type comes back the bacteria can send out special cells to hunt it down using the piece of captured DNA as a mug shot.

CRISPR was first known as segments of prokaryotic DNA that contained short repetitive base sequences. It was first discovered in the late-1980s and 1990s, but there are a lot of unanswered questions about it.[2] Initially, scientists did not know what the function of CRISPR was, just that it appeared in a lot of different bacteria and archaea, then in 2007 it was shown that different spacers within the CRISPR gene showed adaptive immunity to bacteriophages (viruses that attack bacteria and archaea).[2][3] Later, it was discovered that a set of genes located near CRISPR, called Cas, interacted with CRISPR to fight phages.[2] Basically, the CRISPR gene is used to record attacks by phages and other foreign DNA, and the Cas gene is used to snip the intruder's DNA, thereby disabling it; the CRISPR/Cas system acts as a type of immune system for the bacteria/archaea.[2]

discovered that CRISPR could be used as a quick way to edit DNA when studying a Streptococcus pyogenes bacterium.[4][5] (a.k.a., the bacterium that causes strep throat. Who knew those bacteria would actually be useful one day?) They named the tool CRISPR/Cas9.[6]

See the main article on this topic: Irreducible complexity

Some creationists argue that the CRISPR system is way too complex for evolution (*cough* Yeah right *cough*) due to the fact CRISPRs differ among species and therefore evolution is wrong. However, this can easily be scientifically explained by the fact that all CRISPRs may have once been exactly the same, but due to random mutation became slightly different.

So, how does it work?[edit]

CRISPR is actually a system in some bacteria as a virus defense system.

Virus DNA is placed into a "record" of virus DNA so the bacterium can get rid of the virus faster if it comes back. Proteins can be made to snip out certain DNA to defend the bacterium, and therein lies its usefulness.

This discovery revolutionized gene editing and took the genetics world by storm. Scientists have used it to produce mutated monkeys, glow-in-the-dark plants, and (controversially) edit the genes of non-viable human embryos. It could potentially eliminate many of the popular objections to genetically modified food.[7]

Jennifer Doudna and Emmanuelle Charpentier received many awards for their discovery.

The discovery also proves that women can do SCIENCE and revolutionize the field!!! (As if it hadn't been proven enough already) Another convenient use is to rebut someone when they say women have not contributed to science.

Did we mention that women can do science? 'Cause women can totally do science, and stuff.

The effects of CRISPR has worried some who say that we may soon use gene editing to change our own DNA. In China in late 2018 a scientist created life though vitro fertilization. Use of CRISPR in this way constitutes human experimentation as it could cause unforeseeable consequences for the babies.[8] Geneticists say that the CRISPR edited babies are at a higher risk for genetic decease since we don't know how well CRISPR was applied in their birth.

Gene drive is a very dangerous technology. It has a great capacity to help or harm. [9]