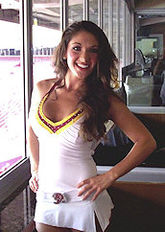 One could question if the media attention would have been as great if she wasn't… um, what do you call it, "fit."

Desiree Jennings (c. 1984–)[1] is a woman from Ashburn, Virginia, who became part of the vaccine manufactroversy in 2009. That October, the aspiring cheerleader claimed she had acquired a rare disease from a flu shot. Her story went viral[2] when she was was shown on TV and the web making unusual movements. The video footage was viewed by many experts, and they felt her movements were not representative of any known or even possible movement disorder.[3] Shortly after, she was miraculously "cured" with chelation therapy.[4] Her story and the media's credulous reporting may have sadly contributed to individual children having their vaccinations delayed or avoided and may, in turn, have caused them (possibly life-threatening) medical complications as a long-term consequence were they to have fallen ill to one of the diseases which they would otherwise have been vaccinated against.

Before her shot, Jennings was physically healthy and in good shape. She was apparently a "Washington Redskins Ambassador", which is akin to being on the farm team for NFL cheerleaders. After her story broke, media reports started calling her an "NFL Cheerleader", which wasn't, per se, true, but this error was overshadowed by the media's inaccurate fawning over an attractive young woman with a very videogenic story.

Jennings reported having gotten a flu shot on August 23, 2009, and said she developed flu-like symptoms soon after. While these symptoms are sometimes reported after a flu shot, studies have been unable to find a causal link.[5] After September 7, she was reported to have "fainting spells" and "convulsions". According to available reports, however, no clear physical cause was found for her unusual symptoms.

According to the earliest available report,[6] Jennings' neurologists were scratching their heads, but her physical therapist diagnosed her with dystonia. This may or may not be true, but if it is true, it raises an immediate red flag, because dystonia is a neurological condition, and it's implausible that a neurologist would miss it while a physical therapist would catch it. More likely, her neurologists ruled dystonia out, but her physical therapist either misdiagnosed it or just happened to mention the possibility, which Jennings then seized on as an "official" diagnosis. We don't really know, since Jennings hasn't released her medical records, and the media reports about her case history have evolved over time.

To this date, there is no clear evidence of her supposed 'dystonia', leaving many to believe that the young woman fabricated the entire story for publicity.

The local paper Loudoun-Times Mirror first broke the story on October 12, 2009.[6] That's probably the single best mainstream report about the bare facts of her case, before the exaggerations began to set in. On the October 13, local Fox affiliate WTTG (Channel 5) aired an appalling, sensationalistic travesty of a report,[2] promptly outdone three days later by the national tabloid TV magazine Inside Edition.[7] YouTube got a hold of it,[8] shit hit the fan, and a million people learned that ZOMG FLU SHOT POISION!!1!!!

The world is full of interesting and unusual neurologic conditions, but Jennings' symptoms, simply put, didn't make any sense. She could walk sideways, walk backward, run, and jog, and even competed in an 8 km race after her big story got out, earning credulous praise from Fox 5.[9] But when she tried to walk forwards (or when people started asking uncomfortable questions about her condition), she started to flail her limbs, jerk her body, and speak with a bizarre accent.[6] Supposedly, startling sounds, like hip-hop and techno, made it worse, but Coldplay made it better.[6] One of Coldplay's songs has a lyric about being "stuck in reverse [...] and I will try to fix you", which is pretty hilarious if you're a terrible person.[10]

Anyway, for once in history, Bill O'Reilly came through as the voice of reason (doubtless a sign of the apocalypse). On October 16, The O'Reilly Factor interviewed Leigh Vinocur, an emergency medicine doctor from the University of Maryland, who explained:[11]

Feeling the heat, Fox 5 interviewed Dr. Stephen Grill of the Parkinson's and Movement Disorders Center of Maryland, who sounded the same note:[12]

Neurologist and skeptic Steven Novella criticized media reports on the case as credulous and sensationalistic:[14]

Once the internet was buzzing with the story, Maryland Department of Health epidemiologist Rene Najera found Jennings' case report in the "Vaccine Adverse Event Reporting System", which tracks this kind of thing. Her VAERS report reads in part, "The admitting neurologist felt that there was a strong psychogenic component to the symptomology, and made a final diagnosis of weakness."[15]

On October 15, two days after Fox 5 aired their first story on Jennings, they reported that Generation Rescue, the notorious anti-vax nutcases led by Jenny McCarthy, had taken up her case.[16] Generation Rescue referred her to Dr. Rashid Buttar, a quackish osteopath[17] known for his use of dangerous alternative medicine practices and history of ethical complaints.[18][19][20] Buttar decided that Jennings suffered from "a number of conditions including but not limited to Acute, Viral Post Immunization Encephalopathy and Mercury Toxicity with secondary respiratory and neurological deficits".[21] This is more or less what he diagnoses everyone with, and it doesn't make a damn bit of sense.

Jennings started a website (now defunct) to promote her story and advocate "true informed consent", which appeared to be distinguished from regular "informed consent" by the presence of nonsensical, unfounded claims about vaccine toxicity.[24] On November 4, she posted a video thanking her supporters, in which she shows no apparent symptoms of dystonia.[25]

Steve Novella was quick to point out something he'd posted before the Buttar "cure" had become public: "Jennings is now in the hands of the Generation Rescue anti-vaccine quacks. I predict that they will be able to 'cure' her, because psychogenic disorders can and do spontaneously resolve. They will then claim victory for their quackery in curing a (non-existent) vaccine injury."[26] Novella referenced Dr. Buttar's disgraceful professional history, explained once again that Jennings' symptoms were best explained as psychogenic illness, and exposed Buttar's scientific and medical claims as nonsensical:

As a Washington Redskins "ambassador", Jennings was employed by Dan Snyder, a billionaire who also happens to own the Dick Clark Productions television production company and prime stock in Red Zebra Broadcasting. He's also the founder of Snyder Healthcare (now Ventiv, or sometimes inVentiv, Health)[27] which makes "alternative medicines", and after Paramount Pictures decided Scientology (and anti-doctor) spokesman Tom Cruise was a little too crazy for them, Snyder stepped in to bankroll the Mission Impossible franchise.[28] Dick Clark Productions is in charge of Dick Clark's New Year's Rockin' Eve, which rang in 2012 with a giant anti-vaccination ad in Times Square.[29]

Jennings has said that it would take an "absolutely amazing, amazing actress" to fake her symptoms.[30] Far more amazing, for example, than the actresses currently in her boss's films. Snyder took the bait, getting Jennings in touch with his alternative medicine celebrity "colleagues" Jenny McCarthy and Jim Carrey.

A note on psychogenic illness[edit]

Psychogenic illnesses go by many names, including somatization disorder (also called "psychosomatic") and conversion disorder. These are different from "malingering" and from simply "faking it". In the late 19th century, Charcot, Freud, and other medical scientists noted that some patients came in with paralysis that did not follow known neurologic pathways and therefore could not be strictly physical. Somataform disorders are treated like any other illness, without moral judgement. Unfortunately, people with these disorders are easy prey for quacks and charlatans.

As for the case of Desiree Jennings...Well, let's just say she would have a thriving career in acting.