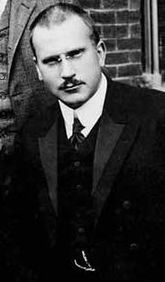 Carl Gustav Jung (26 July 1875–6 June 1961) was a Swiss psychologist and one of the main contributors to Sigmund Freud's theory of psychoanalysis until he founded his own school of analytic psychology.[1] Trained as a psychiatrist and active in the newly developing Freudian schools of thought, Jung agreed with Freud that dreams could inform patients about their personal complexes or neuroses (Freudian psychology), but also began to systematize the symbolism found in dreams to bring to light a dynamic process of personal development that he called individuation.[2]

One of the more lucid expositions of the central ideas in Jung's work can be found in his last book, Man and His Symbol's, which was written to expose general audiences to the central ideas of analytic psychology.[3] Words are most often understood as signs, that is they denote the objects which they are supposed to designate. Jung is interested in the connotations, or symbolic meanings that words, images or stories may acquire. For Jung understanding them better ought to lead one to a greater understanding of oneself. A verbal symbol points toward something less obvious than the word's common meaning. It has what Jung called an "unconscious aspect," by which he meant a meaning that could not be fully defined or explained. Religious symbolism provides a perfect example of this type of ambiguity. A symbol that suggests the concept of a divine object must lead to the failure of reason, for we have no practical knowledge of divine beings, and can therefore never define them from facts taken in evidence. One might say they are beyond the range of our understanding. For Jung, there is no limit to the number of things beyond the range of human understanding.

We constantly use words as symbolic terms for concepts that escape our ability to grasp completely. As already suggested. we would be unable to express religious ideas to their fullest extent without symbolic language and images. The conscious use of symbolic language in religion suggests to Jung a primary role for it in the act of dreaming. He concludes "Man also produces symbols unconsciously and spontaneously in the form of dreams."[4] One might well ask what purpose would such symbolic production serve? Jung's answer is simple but difficult to accept. We generate symbolic imagery in the dream state to supplement our conscious understanding of our personal reality. The way the human mind works, according to Jung, the mind never perceives all perceptual objects present at a given moment nor does it completely comprehend the subject of its attention. This principle is likely to be true given that examples of a perfect photographic memory have never been shown to exist.[5] Scientific instruments such as microscopes, binoculars, or amplifiers can be used to increase the ability to see or hear, but every device has its own limit, or horizon beyond conscious grasp.

Jung maintained an interest in paranormal phenomena and occultism throughout his career. For decades, he attended seances and claimed to have witnessed ghostly visions, telepathy, telekinesis and other "parapsychic phenomena". While he initially attributed these experiences to psychological causes, over the years he began to "doubt whether an exclusively psychological approach can do justice to the phenomena in question"[6] and stated that "the spirit hypothesis yields better results".[7]

Jung's ideas about the paranormal culminated in his concept of "synchronicity", the idea that meaningful connections in the world manifest themselves through coincidences where there is no apparent causal link. Despite the failure of Jung's own experiments to test synchronicity,[8] he held on to the idea and proposed it as an explanation for cases of apparent ESP.[9]