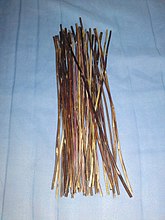 What the heck have you been doing with the firewood this whole time?! We're freezing already!

The I Ching (Simplified Chinese: 易经, Traditional Chinese: 易經, pinyin: yìjīng) or the Classic of Changes is considered the oldest among the Chinese classics

. Originating from China, the I Ching is a book believed to have been written by Fu Xi

. The relevancy of the book rests mainly upon two reasons - historically, it being an early book on the philosophy surrounding "the good life". And, in the woo sense, it being a popular system of divination.[2]

It works by the usual fortune-telling method: one of a number of vague answers is given to an unspoken question, and the asker is either satisfied and pays up, or confused, and pays up for an interpretation of the answer. Parallels with H2G2 are strictly coincidental.

There are 64 (26) hexagrams, each associated with the text of an "answer." Often, that's it. Sometimes a particular line or lines in a hexagram may be given emphasis, with further associated text. Emphasized lines are said to be "moving," and lead to the hexagram's morphing into another one, with yet more text going along with it.

This method is no different from fortune cookies, tarot cards, horoscopes, and the like - it uses a complex system of numerology to put on a masquerade to make it look mathematical to standardise 'signs' of the future. Also, a vague statement or a proverb would be uttered upon completion of the reading, and there are many ways of interpreting the outcome predicted - either as a mundane situation which follows afterwards, an allegory if the situation does not come to pass as expected, or if you're stubborn enough, recycling the prediction so as to shoehorn it to certain life events.[4][5]

Also, like other fortune telling methods, there is no definite scientific proof of its effectiveness.

Long before I Ching was invented in its birth country, China, animal bones would be heated in ovens and cracks formed on the bones would be believed to show answers to the questions the person asked regarding the time to do certain activities. (e.g. making sacrifices, worshipping ancestors). The cracks formed are believed to have meanings by the people, and are also believed as signs signalling successful communication with the spirit world. Tortoise shells were also used in such rituals, and statuses of affairs, such as wars, marriage, and so on would be answered.[7]

The earliest form of present-day I-Ching was standardised with the publication of the eponymous I-Ching, which translates to, "The Classic of Changes" or "The Book of Changes".[8] It dates back to the Zhou Dynasty (1046 BC-256 BC) and is the oldest piece of literature in Classical Chinese.

The book itself, though, wasn't fully all about the divinatory art itself. It also contained accounts of historical events, myths, philosophy, and how-to guides on ceremonies. However, around the time the book was written, the orthodox method of using yarrow stalks to practice the divinatory art was also introduced. But at that time, such was only reserved for the Emperor, but soon, its popularity spread to the literati of the ancient empire.[9]

Mao Zedong is said to have used the I Ching, although the ordinary Chinese people were banned from using it under communism. Work that one out.[10]

The I Ching is the basis of the binary system we have today. German mathematician, philosopher, and Sinophile, (one who is ardently attracted to Chinese culture) Gottfried Wilhelm Leibniz, noted that the I Ching corresponded with every binary number from 000000 to 111111, and believed that it was an outstanding accomplishment by the Chinese in the mathematical field.

Confucius is said to have been fascinated by this method of fortune telling, and has kept a set of yarrow sticks with him. He also has once stated that if he could live fifty years more, he would dedicate all these years to the study of the divinatory art.[11]

In Phillip K. Dick's fictional novel The Man in the High Castle, the characters use the I Ching to make important decisions and ask it questions as if it is omniscient; it is the author's replacement for religion.