Pithecophobia (from the Greek πίθηκος pithekos, "ape, monkey" as in the genus name Australopithecus; and φόβος, phobos, "fear", as in phobia) is basically the fear of apes, or at least the uncomfortable feelings surrounding the idea of apes and common descent.

Take a wild guess as to whether this phobic aversion has been actively cultivated in the religious mindset.

coined the word "pithecophobia" in a 1927 issue of Science magazine's letters section, describing it as:[1]

The letter is fairly humorous in nature, stating how some sufferers can't mention the word "gorilla" without shuddering, and that they should be "inoculated" with Darwinian theory (Richard Dawkins would be proud).

Despite the joking nature of the letter (a reference to the early battles for the acceptance of evolution like the Scopes trial), there are some serious messages in the idea that people might be disturbed by the thought of apes and by their close proximity to humans in genetics and appearance.

It has long been remarked that the appearance and behaviour of other primates uncomfortably remind us of ourselves, from the 2nd century BCE Latin poet, Ennius: "The ape, vilest of beasts, how like to us."[2] to the 18th century founder of Methodism, John Wesley:[3]

We now come to a numerous tribe, that seem to make approaches even to humanity; that bear an awkward resemblance to the human form, and discover the same faint efforts at intellectual sagacity.

Animals of the MONKEY class are furnished with hands instead of paws; their ears, eyes, eye-lids, lips, and breasts, are like those of mankind; their internal conformation also bears some distant likeness; and the whole offers a picture that may mortify the pride of such as make their persons the principal objects of their admiration.

Those with an interest in robotics or artificial intelligence might recognise that this is describing the "uncanny valley" — where people are more disturbed by non-human things that look sort of human than they are by non-human things that are totally human. Consider that no one seems fazed by the brilliantly realistic waxworks of Madame Tussauds, but a Japanese sex-robot with its plastic skin and slowly blinking eyes is pure nightmare fuel (despite the lost souls making up the MGTOW community insisting otherwise[4]).

Pithecophobia may be the best explanation for the unpopularity of evolution — as ever since Darwin, evolution has popularly been identified with the descent of humans from a non-human primate, rather than a scientific process of "descent with modification", or "change in the frequencies of hereditary traits in a population"; and there is no known objective reason for doubting that evolution happens (and always has happened) in all forms of life as we know it. 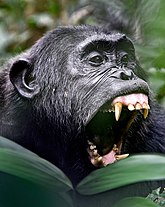 Well I'll be a human's uncle!

and orangutans are considerably stronger than humans, being capable of inflicting traumatic injuries, so many zoo keepers, big-game hunters and medical researchers have every right to fear non-human primates, especially non-human simians.