Church of Christ the King, Bloomsbury, London, built for the Catholic Apostolic Church in the 1850s

The Catholic Apostolic Church was an eccentric form of Christianity founded in the early 1830s. It is sometimes called Irvingism because of the apparent influence of the Scottish clergyman Edward Irving (1792-1834) on the movement, although its members resented that name. It was particularly popular in Britain and Germany, but had many churches spread through northern and central Europe and North America.[1]

Despite its name, it didn't have much to do with the Roman Catholic Church. In some ways, especially in its early years, it resembled evangelical, non-conformist Protestantism, with an emphasis on the coming end-times, prophecy, faith healing, speaking in tongues, and other strange mystical practices. But it also had Roman and High Church Anglican influences, with various levels of priesthood and service and a complex organisational structure involving numerology and Biblical models. It looked back to the early church and sought to resurrect old liturgies and forms of worship, combining bits from all the different forms of Christianity, and avoiding sectarianism. It also had a love of decoration and art, with a variety of exotic vestments and some of the most impressive church art in Britain.

While briefly popular in the UK, with some wealthy backers in the 1830s, in the 1850s it decided not to appoint new leaders, seemingly in expectation of the imminent end of the world. As the old leadership died off it found itself unable to ordain any more clergy, and gradually wasted away in the 20th century.[2] A few stragglers and offshoots remain but it is now chiefly known for its art and architecture.

Its inspiration lay in the early 19th century with churchmen and theologians such as Edward Irving (a Scottish clergyman thrown out of the Church of Scotland for heresy), James Haldane Stewart (an American-born but British-based Church of England clergyman who was focused on evangelising the Jews), and John McLeod Campbell (a theologian considered important for his analysis of how Jesus Christ atoned for humanity's sins). There was a general interest in practical, populist manifestations of religion, such as speaking in tongues and healing, and an attempt to be less depressing than certain denominations.

The church came into being after 1831, when it was gradually created by followers of Irving out of various existing congregations and groups. One important precursor was the series of conferences held by wealthy banker and member of parliament Henry Drummond from 1826 in Surrey; despite opposition, both Drummond and Irving believed that recently-observed cases of speaking in tongues and similar phenomena observed in Scotland were genuine messages from God. Irving died in 1834, and his congregation in Newman Street, Fitzrovia, London, was taken over by a former dentist, Christopher Heath. This congregation became part of a group in London called the Seven Churches, which claimed independence from other Christian authorities and set up their own administration.[3]

By 1835, the nascent Catholic Apostolic Church was taking shape: the founders had appointed 12 apostles to lead the church, supposedly chosen by divine vision and suchlike methods. These numbered clergymen, politicians, lawyers and other people of high social standing: including Spencer Perceval Jr (son of the assassinated British prime minister), Henry Drummond (who contributed a lot of money to the church), John Bate Cardale (a lawyer with ambitions to join the priesthood), and Thomas Carlyle (a prominent Scottish lawyer, not the infamous author/philosopher Thomas Carlyle).

The formulation of a new church was gradual; members believed they were practising the true ancient form of Christianity and did not wish to be sectarian or schismatic, although in practice that eventually meant creating a new sect separate from all existing denominations. In 1847, it was agreed that the church in Newman Street, London, should be called "the One, Holy, Catholic and Apostolic Church, London, The Central Church", and in 1849, Cardale decided to use the name Catholic Apostolic Church generally for all the organisation's church buildings, which were later recorded by the 1851 census.[3]

In 1855, the church decided not to appoint any more apostles to replace those who died. Some members who disagreed with this split off, especially in Germany and the Netherlands, where offshoots were created such as the New Apostolic Church in Hamburg. But this doomed the remaining church to a slow death, because the hierarchy depended on people at the top to consecrate others to the lower orders. The last apostle, Francis Valentine Woodhouse, died in 1901, and it entered what it called the "time of silence"; there was nobody to give any sacraments or consecrate priests and deacons, but the remaining worshippers muddled on.[2] The church's members must have been long-living because the last priest died in 1971 and the last deacon in 1972. A few congregations persevered even beyond then without anyone to minister to them, but it is largely defunct.

The church had a bewildering array of positions and classes of membership: angels, apostles, bishops, priests, deacons, elders, evangelists, pastors, prophets, underdeacons, acolytes, and scribes. It was divided into twelve tribes, because the Bible says so. England was the "tribe of Judah".

The structure changed with time. Initially the apostles were supposed to be in charge of the universal church, which would be unified in the end-times but which was considered to be prefigured by the Seven Churches in London. Later, when the unification of all Christian denominations didn't appear to be happening any time soon, apostles were assigned individual regions associated with the twelve tribes. Meanwhile angels (who were actual people not supernatural beings) were intended to control existing churches. Deacons and deaconesses handled temporal administration and looked after the poor and education of children, although the latter foundered (at least in London) due to the unwillingness of parents to commit their children to schools that focused more on the skills of an English gentleman than either a practical or religious education.[3] Ministers and deacons were ordained by apostles, while deaconesses were not ordained.[3]

There doesn't always seem to have been great consistency in naming or in codifying the rules, although the church held numerous councils and other meetings and produced voluminous minutes and communications. These councils were modeled on the Old Testament tabernacle often supposed to have 135 members, in some obscure Biblical numerological reference.[3] Later, rather than being run jointly by the 12 apostles, Cardale came to have greater authority, especially in London where the church began and most of the apostles and councils were based.[3] The organisation probably differed elsewhere, particularly farther away from Britain.

Church services were based on an eclectic collection of influences, focused on the sacrament of the Eucharist. Irving had drawn on the simple rituals of the Church of Scotland, but later clergy operated in a more elaborate, high church style, with a liturgy that mixed the Church of England's Book of Common Prayer, the Roman missal, and other early Christian texts.[3] 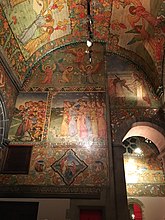 It is responsible for a number of impressive buildings, including the large Church of Christ the King in Bloomsbury, London, designed by the pioneering Gothic revivalist Raphael Brandon; the building was later used by the University of London for Anglican worship, before being returned to the Catholic Apostolic Church in 1994. Since 2015, part has been used by the Church of England for missions (not as a parish church).[4][2]

In Edinburgh, the city's pre-eminent architect of the time, Robert Rowand Anderson (founder of the Royal Incorporation of Architects in Scotland), designed Mansfield Place Church, which was completed in 1885 and subsequently decorated with vast murals by the Irish-Scottish arts and crafts artist Phoebe Anna Traquair that earned it the soubriquet "the Scottish Sistine Chapel". The Catholic Apostolic Church ceased to use it in 1954, and the building was used by Baptists and then a brick company before being restored as a wedding venue.[5]