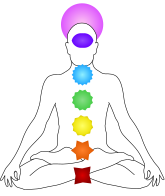 The chakra or chakra points involve an idea appropriated from Eastern, particularly Indian, beliefs. As a visualization method for yoga it is helpful to avoid injuries.

The basic idea postulates a series of points along the middle of the body where energies gather. Those points then regulate those energies within you. It is possible for those points to become clogged or out of whack, and that "re-aligning" these chakra points can cure many ailments. It may appeal to this market for several reasons. For one, it is easy to extrapolate the 'functions' of the chakras to actual organs in the body, considering they are a bunch of lore trying to explain aspects of the human body. In addition, it has a low entry level; little needs to be bought in order to follow new-age chakra woo except maybe embarrassing yoga outfits and a foam mat to carry around under your arm. Chakra woo also goes together with other kinds of woo very easily, because chakras seem to have to do with many other factors, such as diet and the body posture. Finally, chakras are pretty: thanks to American New-age marketing, they now sport all the colors of the visual light spectrum and look great in advertisements. Especially alongside crystals of convenient matching colors (also for sale). Throw in a double rainbow arcing over a tropical sunset or two for good measure while you're at it.

On its own, as a mystical system of enlightenment, it is no worse or better than any other. As a means of explaining treatments that seem to have some utility, it's highly dubious. As a method of diagnosis, it is bunk.

(Most of the people in the West who go on about chakras have very little training in Indian mysticism, and thus are missing out on a great deal of the philosophy and understanding behind it.)

There are a million names for each chakra, sub-chakras, differences in tradition, and other discrepancies. For the purposes of sanity, each here will be listed accorded to the Tantric hindu tradition. If you seriously are taken with researching more on the more complicated and detailed aspects of chakras, by all means go and check out Wikipedia's entry

and related pages. Actually looking into the tradition reveals that there are far, far more specifics than the bare minimum woo-meisters use to extract money with.

Statements below can be assumed to be 'in the tradition of' this practice, so stating that a chakra 'does' something or enables something should be taken to indicate the function within the tradition. It should be fairly clear that mystical energy points don't actually control human organs or mentality.

This chakra is at the top of the head, and for some reason is often represented with violet (and on this page for readability reasons) when it's actually associated with white: a white lotus of one thousand petals to be precise. It's supposed to be the chakra of higher consciousness and awareness. For some reason people connect it to the pituitary gland in humans, though how hormones relate to higher consciousness is as mysterious as anything else. Traditionally, mastering meditating bestows occult powers and at least partial omnipotence on the meditator. Although the feats of many yogis are indeed amazing, it's highly unlikely that magic superpowers are the case.

This indigo chakra is otherwise known as the third eye and deals with visual and perceptive consciousness. It is represented by a lotus with two petals: two petals for Shakti (female) and Shiva (male) energy, two petals for two psychic channels, and various other symbolisms. It has been associated with the pineal gland, and meditating to it is suggested to give one psychic powers. The outlook for that looks... hazy.

This chakra is represented by blue, but in Tibetan Buddhism it is red. Either way, it is the chakra of expression, fluidity, independence, freedom of thought, feelings of security and all of that good stuff. It is represented with 16 petals, and it's pretty important in Dream Yoga. That is to say, meditating on it supposedly promotes lucid dreaming.

Represented by twelve petals and a hexagram, this green chakra mandates a whole host of things. Physically it is tied to well-being, circulation, stress, and other bodily functions, and in the nonphysical realm it covers love, compassion, devotion, and other feel-good things. It is often connected to the thymus gland. It is far more important in Tibetan Buddhism, as it in that tradition also handles reincarnation. However, meditating on it allegedly allows one to body-surf, become a master of public speaking, and be dearer than the dearest to women.'[2] No scientific studies have so far located a reputable source of magic date-finding powers, however.

This ten-petaled yellow chakra is associated with the digestive system of the body, as well as all manner of growth physical and spiritual. This includes issues of growth and change, such as power, fear, and forming opinions. Mastering meditating can bestow upon one the occult power to create and destroy the world. Thank goodness nobody's actually gotten good at meditating on it yet.[3]

Associated with the testes or ovaries, this six-petaled orange chakra is said to preside over adrenal hormones in general. Spiritually, it's supposed to govern things like desire, basic human needs, violence, creativity, and happiness. It is a troublesome chakra in the tradition, and many holy figures have supposedly suffered under its sexual temptations. Mastering meditating to it supposedly quells fears of drowning and allows the invoker to taste anything they want. Next to the whole 'destroy the world' power this seems a bit of a disappointment.[4]

Located in the base of the spine, in the pelvis, is this four-petaled chakra. It is famously associated with the actual sex organs and sensuality as well as flight-or-fight response and simple survival. It competes with the Sacral Chakra for which is the sexiest chakra. This chakra doesn't exist in Tibetan Buddhism. Mastering this chakra is said to make the invoker a king of all men: knowing everything and immune to all diseases.[5]

There are many, many minor chakras and lesser chakras as well as sub-chakras and other artifacts. Not even experts are sure how many there are in total. It's safe to say that when cultures make up many congruent spiritual traditions, the result will be as numerous as there are people to claim mastery over that tradition.