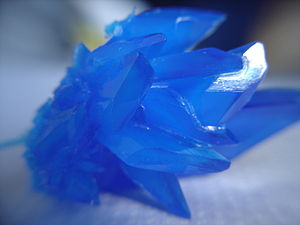 Perfect for curing the crick in your neck.

Crystal healing is the practice of trying to heal physical, emotional and/or psychological problems by placing precious or semi-precious stones on or near the patient.

The standard form of crystal healing associates a colour of the rainbow to each chakra of the body. A problem in some part of the body is "healed" by placing an appropriately-coloured crystal on the chakra closest to the afflicted part.[1] For example, the chakra in the forehead is associated (by authorities undefined) with the colour purple, so to cure a headache you would apply a purple stone to the forehead.[2] The lack of demand for amethysts to replace aspirin adequately demonstrates the effectiveness of this procedure.

Apart from standard healing doctrine, practitioners remain free to make up their own rituals for using the stones, and may ascribe to them whatever magical properties they please. For example, crystal therapists attempt to diagnose the state of the patient's aura and select crystals they hope will remove "disequilibrium".[3]

Adding to the hilarity, altie veterinarians (they exist)[4] have started using crystal healing.[5] Without the placebo effect it is even less effective.

Crystals themselves may not require "healing".

Although there are traditions for this going back for centuries or even millennia, and although many crystal practitioners remind prospective clients of this, the standard method of crystal healing described above dates back no earlier than the 1940s.

Besides the standard method, any particular technique used by any particular crystal healer might have been made up last week or earlier. For example one UK practitioner uses intuition, dowsing, Reiki, enhances the vibration of the crystals and charges £35.00 for a three-quarter hour session.[6]

There is no evidence that crystals applied externally have curative powers, nor do the crystal healers themselves seem at all interested in research to look for such evidence.

The claimed physical effects of the stones are usually described in such terms as: they "help the liver to function" or "balance the endocrine system". You will look in vain in a book on crystal healing for a claim to treat any particular problem such as measles, sunstroke or a heart attack. For this reason, crystal healing is less pernicious than other forms of alternative medicine, which do offer specific treatments and so turn patients away from real medical care. Rather, crystal healing is by-and-large a hobby for those who, if they were really ill, would almost certainly see a doctor.

Besides the vague physical benefits ascribed to crystals, they are holistic,[3] they are also claimed by various healers to have more spiritual or occult purposes, such as opening the third eye, repairing the aura, or warding off psychic attacks. While almost all practitioners agree that the crystals have such metaphysical effects, there is no agreement among them about which stones have which powers. Not only are these claims inconsistent, they are also untestable.

It may perhaps be argued, though, that if someone is sincerely in fear of attack by malignant spirits, and is sincerely convinced that carrying a magic pebble will ward off these attacks, then they are receiving a benefit from the pebble, though admittedly not the benefit they think they're getting.

There is also little or no agreement between the practitioners as to how a pebble, however pretty, can balance the chakras: theories range from the influence of extraterrestrials to the usual jargon about quantum theory.[7][8] 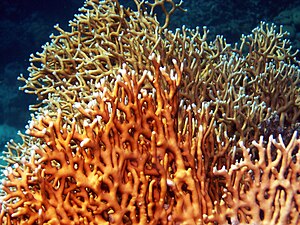 "Fire coral. The guru said if you put this on your skin, it'll heal yo—AAAAAAA!"[9]

It is interesting that many of the theories claims made by crystal healers attach importance to the regular geometric structure that characterises a crystal. Yet so-called "crystal" healers, in practice, make use of any precious or semi-precious material in their work, including not only amorphous (non-crystalline) rocks such as obsidian but also such substances as amber, jet, ivory, coral, and pearls.[10][11][12] Some practitioners attempt to rectify this by dropping references to crystals and calling their technique "gem therapy". However, a different name fails to fix the underlying problem — the lack of any scientific foundation.