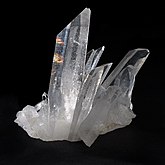 It's pretty-looking because it's magic.

Crystal woo refers to a seemingly preternatural ability to make - nay, compel - people[note 1] to assign all sorts of ludicrous powers to crystals. The folklore of many cultures as well as modern new-age medicine claim that crystals have special powers or energy. This includes pretty much everything, from healing, to protection, to "focusing energy", "directing energy", "aligning energy" and so on. Really, there is nothing that woomeisters and new-age salesdroids haven't tried to associate with crystals. They look pretty and they have an almost "supernatural" feel to them, due to the regularity of their shape[note 2] - ergo they must have something special about them, despite being nothing more than highly-aligned mineral structures. Much crystal woo is based on Native American woo (North America serving as the current World Leader in Woomeistery).

The best known misuse of crystals is of course the "crystal ball", which for many self-claimed mystics and self-appointed psychics serves as a medium for images from "beyond". (Though in reality, most large 'crystal' balls are made from crystal glass, which is structurally amorphous and not a crystal at all...)

"Crystal healing" is the use of pretty stones to magically realign the chakras and make the cancer (or whatever) go away. It didn't work for Andy Kaufman and it won't work for you.

A crystal child is like an indigo child but more "advanced" or something.

In the early days of this rigorously tested theory, books on crystal healing were thin, limited only to those few minerals that the woo merchants had heard of. In response to criticism, books began to appear that transcribed a much wider variety of mineral species from proper science-texts and then added their magical qualities (which gave the entirely false appearance of having been made up). At first these amazing healing properties differed wildly between the ever-increasing number of crystal-woo books, until some sort of rough consensus was reached, largely by subsequent authors simply copying everyone else but with different pictures (compare publication bias).

A fact seemingly unknown to crystal advocates is that every mineral grain, no matter how small, retains its crystal lattice, and so should retain all the magical powers of that mineral. Given that the entire land surface of the Earth is made of rocks, sediments and soils that are largely mineral grains, everyone on the planet should be receiving the benefits without having to purchase overpriced and poor-quality crystals from scented shops or from people with purple hair. Beaches often consist almost entirely of quartz grains, as do deserts, and so overall there should be no negative energy at all anywhere on Earth. And all those people who sling off at "crystals" (when they really mean "crystal woo") should realise that crystals (as, for example, in crystallography[1]) are a STEM[2] subject - and why do they (or their parents) wear/gift engagement rings incorporating crystalline gemstones anyway? 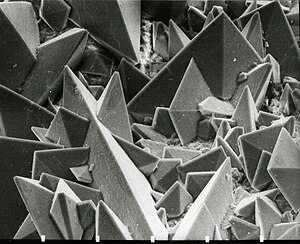 The crystalline, clearly non-abrasive surface of a human kidney stone - natural and thus good for you, hooray!

First and foremost, despite what some practitioners who use crystals claim, there is no scientific evidence that crystals have special powers or energy. Answers.com sums up the scientific consensus on crystal therapy:

Any powers that crystals might appear to have can be explained by placebo effect, selective thinking, wishful thinking, unconfirmed testimonials, and communal reinforcements. [5] Proponents admit that observation of the energy in crystals is dependent on one's intention and attitude. Internet sites selling healing and protection crystals commonly acknowledge that they are intended for entertainment purposes only and should not be considered a substitute for medical treatment or common sense.

A crystal may be chosen, it is believed, by handling it and determining intuitively if it "feels right." Joanne Brannan has this to say about choosing a protection crystal:

Crystals have memory, if you hold a crystal and permeate it with love the crystal will remember your love and suffuse any environment where it is with love. Crystals also absorb negative evergy and sometimes need cleansing. To cleanse a crystal it is believed one may wash it, leave it submerged in salt water or a fresh running stream for some time, bury it in earth, or expose it to sunlight or moonlight. [7] IndianReikiMasters.com explains how to clear and test a crystal before use:

Note the use of a dowsing rod in the above experiment.

IndianReikiMasters.com goes on to explain that after it has been cleared a crystal can then be programmed:

IndianReikiMasters.com further asserts that to program a crystal one need only place it on the brow and imagine the desired result.

In order for one to receive the beneficial effects of a crystal, it is believed it may be worn as a pendant or other item of jewelry, wrapped in cloth and placed in a pocket, or kept in a bag on one's person. Crystals may be set on a computer or microwave oven in order to counteract the effects of those appliances or they may be left about the home, work place, or vehicle.

Crystals are believed to be particularly powerful when placed in a geometric pattern or grid. Emily Gems explains:

For dramatic results it is believed a crystal may be placed on a body part or held in the hand. 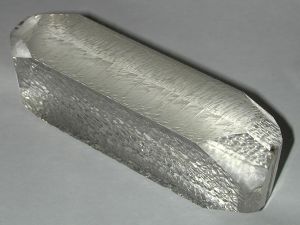 Hang the crystal around your neck to focus your "spirit energy."

It is believed that crystals possess their power because they are in tune with the Earth. Olga Rasmussen at HealingCrystals.com explains:

Gems4Friends.com offers a different explanation of why crystals possess their power:

Norma Buchanan from American Time also has an explanation for us:

And here is where woo and science diverge again. The quartz does not "generate voltage when it vibrates". The piezoelectric effect refers to quartz generating a voltage under mechanical stress. In a quartz watch the quartz is not under mechanical stress. The watch battery supplies a voltage to the quartz, making it vibrate, and providing an accurate oscillation for timekeeping. All the electrical power in a quartz watch comes from the battery, which woo merchants fail to grasp. It is this utter failure to understand simple science that allows simpletons to believe that quartz possesses magical properties.

See the main article on this topic: Crystal healing

Rasmussen also explains that "quartz crystals can conduct the energy of the healer's thought-forms and patterns."

Certain crystals or stones are associated with each of the chakras, or energy systems in the human body. Rasmussen offers this observation on the specific stones associated with the healing of each chakra:

Note that Rasmussen also mentions studies are being undertaken by "reputable institutions" to verify the existence of chakras, although no such studies are mentioned specifically, for reasons that we will let you guess.

HealingCrystal.com mentions that when dealing with protection stones "intention" is critical to success and that one should "be clear about what it is you are trying to accomplish, and think of it in positive terms."[16]

Ironically, despite the claims of protection, quartz crystals are a known human carcinogen, based on worker inhalation of crystalline silica in the form of quartz.[17] Shucks!

It can be seen from all the examples above that to be a crystal expert requires no actual study or rigorous testing, simply the brazen confidence to spout a word salad of nonsense about chakras, healing, auras, harmony, positivity, balancing, love, protection, energies, unicorns and rainbows. And for the audience to be receptive, gullible and ignorant of even basic scientific fact. A claim by one proponent that quartz crystals are only found in 7 places on Earth that correspond to the chakras of a human body appears shaky when quartz is one of the most abundant minerals on Earth. Another alarming claim was that digging up quartz to supply healers was disrupting the energy flow between the chakras and likely to lead to a greater environmental disaster than clearing the Amazon Rainforest.

Citrine, a yellow form of quartz with distinct magical properties, is in fact almost always amethyst that has been baked in a hot oven. Natural citrine is rare but oven-baked amethyst is a massive industry. You've been had. And obsidian, as promoted by the famous scientist Victoria Beckham in her fashion range, isn't a crystal. It's a glass. It has no crystal structure. But if you accept that a non-crystalline solid has magical properties then you have to accept the same of every other solid.

While most of its defenders will say that using crystals for healing or protection is harmless as long as they don't take it as a substitute for medical treatment, there are still a few hazards associated with the practice (beyond the ones that any form of woo/alternative medicine would have).

This crystal could make all your problems go away![note 3]

Most of the commonly used crystals, like gypsum/selenite, pyrite, and the various forms of quartz are usually harmless, although they may contain very small impurities of dangerous elements. However, there are some crystals that are very dangerous, and while many practitioners will warn about their toxicity, some will still encourage their use. Examples include:

While some of these crystals can be handled safely with proper safety measures, the various woo applications often require putting them close to your body, increasing the chance that something bad can happen. You're better off sticking to quartz... oh wait.

The only kind of crystals that woo-pushers seem to avoid are the super radioactive ones like uraninite and torbernite[note 4] — apparently lung cancer from asbestos is okay but lung cancer from radon is not. Either that or being anti-nuclear trumps using healing crystals in the bizarre hierarchy of New Age beliefs.

Tantalite, one of the crystals that is responsible for the devastation in the Democratic Republic of the Congo. Without it, the device that you're reading this with probably wouldn't exist.

Another concern with crystal healing is where these crystals come from. Many are mined in dangerous conditions that underpay workers, use child workers, and sometimes slavery, and result in the destruction of the environment and economy of developing countries with transnational corporations and a handful of dictators being the only ones that benefit.[23] The one problem with this though is that it may seem a little rich, since so many aspects of our daily life such as cars, computers, lights, cell phones, airplanes, and electronics in general all depend on minerals that are mined in these conditions,[24] so stopping the use of crystals in healing won't fix what is a massive systemic problem in neoliberal capitalism, especially as many of the crystals have other uses for ore or building material. Still, the people who use these crystals should be doing more to call attention to these injustices, although we suppose the same should be said to people who use computers.