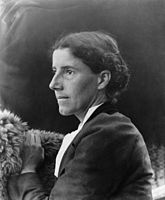 Charlotte Perkins Gilman (1860–1935) was an American sociologist and is commonly credited as being one of the first feminist scholars to write about women's oppression both within and outside the household. Born in Connecticut, she had a rough and impeded education and life after her father walked out on her family, forcing her mother to raise her and her siblings alone, moving to other places to suit the economic needs of the household. As a result, her education was inconsistent. Yet, she was still able to utilize the writing skill she had and develop both fiction and non-fiction works about the oppressive nature of gender norms and expectations, unknowingly using a rudimentary version of Standpoint Theory from herself speaking to these gender-related issues. Her work influenced women's rights activists and feminist theorists who in turn would influence more feminist thought. In essence, she was one of the pivotal writers of American feminism in history.[1]

"The Yellow Wallpaper" is one of her most significant fiction short stories,[2] influenced by her personal life and its many troubles. This story was about an internal monologue of a woman in a married household and how she laments about the state of their vacation house and her desire to switch out the 'horrid' wallpaper that is plastered in the nursery. Throughout the work, she occasionally tries to talk to her husband about her psychological sickness while she gets better from her physical one, but her husband is defiant, acting in outright coercion, simultaneously making the protagonist of the story think it's her own problem, and that the problem that she thinks exists is in fact not an important one.

This story highlights some very important parts of society at the time. Firstly, it analyzes the male-female dynamic within and outside of the household. It addresses the power dynamic within the household, that women are diminished and the man is regarded as having the power in the relationship, being able to give commands and declare the definition of the situation primarily his way. It also addresses the power dynamic economically, in that since the man is the one with the job and the economic power to rent the place, he therefore has the power to make decisions about the house. The wallpaper, to him, is a frivolous issue that seems unimportant. Secondly, it analyzes the effects of that dominance and inequality utilizing the narrative from a woman's point of view, taking note that the husband did not even like her writing in a journal or diary. She addresses this directly in the story yet still continues to write, feeling obviously conflicted about whether she should write or not. In addition, at the end of the story when the protagonist finally removes the 'horrid' wallpaper that the story is about, her husband comes home and is aghast to see his wife affront his authority. She is finally taking matters in her own hands and he responds with astonishment, as he originally expected himself to have the power in the relationship.

This story is fiction, but is written from a feminist viewpoint as an 'ideal type' of a gendered social interaction happening in society, with the roots of the given inequality manifesting within the narrative said by the narrator and the reports of the interactions. This literature is amongst other literature that Gilman has wrote, attempting to shed some light on gendered situations and the anguish that happens in the woman's point of view, but is especially important because this particular story is reflective of her own personal life, and stems from her personal experience as a woman in society.[3]

Her prominent nonfiction work, Women and Economics,[4] is a classic that details out a multifaceted view of gendered social reality and the consequences that it entails. In it, she spells out the problems, the historical foundations of these gendered roles, and criticisms to predisposed assumptions that take place within a society. As a result, this work can be interpreted as a call to action for gender equality, and to fight against any sort of gender-centric authority that is currently taking place.[5]

Keep in mind that Gilman lived during a time when gender identity was synonymous with sexual characteristics. There was no differentiation between sex and gender like there is today, so for Gilman's particular work, consider the two terms synonymous in the historical context.

One angle that she takes is based in sex and biology. While we address the fact that different sexes have obvious different physical characteristics, Gilman questions this as the basis for legitimizing gender inequality. She references the Darwinian idea of evolution, noting that if species become 'oversexed', a term she uses here to indicate a gross and inordinate differentiation between the sexes, they actually lose their ability to maintain their position in the selected order. This is because if the different genders are too differentiated, the combined work that the entire social group is capable of doing would be lopsided more to one gender than another. Because of this, if one gender suddenly died off or was incapacitated for some reason, the other gender would not be able to pick up the labor slack that was being dropped. Yet, in society, we know that women are in fact more than capable and willing to 'pick up the slack' of previously male-centric jobs, such as managerial work and production in factories.

Of note, she makes the important observation that sex-distinctions between men and women may be more embellished than necessary, causing a social expectation going beyond what people are biologically engineered to do. For instance, the expectation that a woman is primarily in charge of childcare simply because women birth babies, and that the father is unable or less capable of childcare. Or, the idea that women are frail and weak and are therefore not capable of doing 'manly' jobs, such as construction or business. These ideas have, in fact, no biological basis, and would constitute such an extreme sex-distinction that, if biologically true, could represent an excessive amount of risk for the species as a whole. As she observed, this assumption of what the sex-roles were expected of them to do were not coherent to the reality of what women were capable of doing, and were thus not based on biological fact.[6]

Another angle she takes is the establishment of social expectations. The other side of the coin to genetics, she discusses the nature of society implanting gender ideas in men and women, in what she calls 'race-attributes'. She discusses that in a normal species without this drive for 'race-preservation', a society has people with the same organs, the same roles, the same functions. That is, a homogeneous population roughly capable of doing everything on the wide scale. She believed that people have a drive for 'race-preservation', meaning the drive for continuing our specific current image of how one's race operates, we create a reality both biological and culturally that primes men and women to have distinctive organs, distinctive functions, and distinctive roles.

This fundamental difference to 'self-preservation' and 'race-preservation' illustrate an important point: the differentiation from rational self-interest and irrational group-mentality. She argued that with subtle imagery, linguistic functions, and overt priming, children from the day they are born are given a reality at which people are instituting 'race-preservation' tactics, those at which ideas are instilled in someone's head pretending to be 'self-preservation', thus convincing that one is acting on their own interest when in fact they are acting on the interests of the irrational group is a fundamental way that gender norms and social expectations bifurcate each other and are able to develop and maintain their existence.[7]

Gilman's final angle for gender and sexual differentiation in society is the nature of financial and economic institutions. Obviously, during her time the norm was that the woman stayed home with the child and did home-work, while the man acted in the job market, performing a job to receive a pay and thusly being able to afford commodities such as food, clothes, rent, medicine, education for the children, and so on. However, she points out an important observation: men get paid for a certain type of work yet women do not get paid for another type of work. Somehow, certain types of work are recognized in that current capitalist society as having economic value, while other types of work are not. True, a woman is able to attain 'a wage' from the man that comes home with the money, the 'breadwinner'. However, one also must acknowledge that it is also primarily the man who holds economic control of the household, how much a woman gets for their 'wage'. There is no system in place to prevent the woman from being paid scraps for their hard labor, being told instead to 'appreciate' what they have.

Throughout her work, Gilman constantly compares women to domesticated animals, and for good reason. Not only are certain types of work recognized over others, but the context of that work being done is also important. In one area of society, a baker bakes his bread in an institution and sells it for money to use for his own personal benefit. A woman in the home makes bread for their children with no promise of pay. Both doing the same job, one performing 'professionally' throughout the day and one performing as a mindless expectation for their role in the house. Like a cow produces its milk, the woman 'produces' cooked food, a clean house, and effective child-rearing and childcare while the man of the household earns his 'fair share'.[8]

With these three details of criticisms about gendered and sexed life, she declared the relationship of men and women to be 'over-sexed', and that there needs to be an acknowledgement that there is an unjust unbalanced hierarchy of males to females in society. Given she lived during a time when suffragettes were at their most prominent point, it's easy to say that it follows that her work influenced more and more women to act in ways that, at the time, may have been 'unruly' or 'unladylike'. Of course, these value judgments of women only prove the point that sexes were 'over-sexed' in society, given that there were very specific actions that were attributed to them and certain judgments that were reserved only for those of a specific sex.

Gilman was a prominent writer drawing influences from many prominent scientists and philosophers, including Karl Marx and Charles Darwin. She paved the way for feminism and sparked a revolution.