From RationalWiki
(Redirected from Connecticut)
Jump to: navigation, search
Connecticut 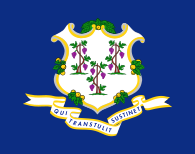 Connecticut is tucked away in the Northeast.

The Charter Oak, depicted here, is long dead, though one of its direct descendants lives on in one of the most appropriately named towns ever, Plainville

Connecticut, the "nutmeg state", is a suburb of New York City and home to a city where they work in insurance - Hartford. Yeah, a real party town. If you like antique shopping or picking through ruins of abandoned factories, that is.[note 1]

Though the state is technically part of New England, an awful lot of people from Connecticut will vociferously deny that, largely due to them being New York fans. Rumor has it that the rest of New England is planning a referendum to cast them out, or at least those south of the Nomar/Jeter Line (Hartford) that separates Boston and New York culture.

The rest of New England doesn't really know what to do with Connecticut either -- Maine, Rhode Island, and New Hampshire mostly spend their time being alternately pissed off at or envious of Massachusetts; Western Massachusetts mostly spends time being just plain pissed off at Boston[note 2]; and Bostonians, unaware that anything exists beyond the 495 beltway but apple trees to the west, strip clubs to the south, tax-free shopping to the north, and New York City somewhere down below in the depths of Hell, pretty much don't care either way. Vermonters are a special case that really defies description, but it mostly involves beer, dairy products, maple syrup, and easy access to Montreal.

There's a cool submarine museum in Groton featuring free admission (your tax dollars at work!) that includes a revolutionary war era "submarine" and a Nautilus-class nuclear powered and armed submarine bolted to the dock that the amazed visitor can tour. Oh, and there's also a Poseidon missile lying on its side so you can see just how cool we are. I think the warhead was removed. Groton is home to both a U.S. Navy base and Electric Boat (A Division of General Dynamics), where they build, guess what? Nucular Nuclear submarines!

The northern part of the state, especially outside of the Hartford area, is mostly the domain of hikers and people looking for cheap second homes. Almost no one actually lives up there, especially the northwest, and despite the official statistics showing above-average median income for these towns they are some of the most bizarre and depressing places imaginable. The few people who inhabit the area seem not to realize that, while technically in the Appalachian range, they're a good long way away from cultural Appalachia; while one could possibly understand a Confederate flag south of the Mason-Dixon Line, the people brave enough to venture up to this part of the state find it alarming how many they see there. It's pretty much a strange and unsettling godforsaken nowhere land, which is both its main draw for the aforementioned hikers and its greatest deterrent to everyone else. At first this might seem like a random and odd place to put a museum about tort law, but it makes a tiny bit more sense when one discovers that Ralph Nader is one of the only people from the wretched wastes up there who managed to escape them.[1]

Pickles in Connecticut can, by law, only be considered pickles if they bounce.[2]

Since the Hartford Whalers abandoned the state, and because of the University of Connecticut's amazing basketball team, the only sport anyone in the state cares for is basketball. University students like to go crazy and destroy their campus while their warriors fight in the courts of other states. If UConn gets into the Final Four, no matter if they win or lose, riots will ensue. Just hope they win so at least the riot after the game won't be angry. This is best exemplified in the UConn Riots of 2014, where, after the men's and women's teams got into the Final Four, the finals, and, as of April 8, 2014, the championship, riots ensued in the center of campus. Highlights include students using a lamppost to smash their way into a building, car-tipping, public smoking of Mary Jane, and overall responsible, sober behavior drunken elation. But what else is there to do in Storrs?

At least it shows some semblance of gender equality, because the party is hard whether it's the men or the women. And while it might not be quite as hard for the women, the answer is not sexism but the fact that they always win.

-Rivers Cuomo, the guy from Weezer.

-Suzanne Collins, for if you have multiple brain cells, but are still a teenage girl.

-P.T. Barnum, who ran a circus and started a ton of hoaxes

-Paul Manafort and Michael Bolton, albeit from the alternate universe that is New Britain.

-Candace Owens, another one we wholeheartedly apologize for.

, who ran a school for girls and then specifically black girls before being run out of town. For an example of history done right, Canterbury

eventually did the right thing during her lifetime and made sure to put the whole story on display where it happened.

-Mark Twain, who wasn't from Connecticut but lived much of his life in Hartford. His house there is truly something to behold.