From RationalWiki
(Redirected from Cider)
Jump to navigation Jump to search 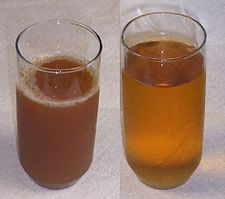 American cider on the left, apple juice on the right. Ned Flanders knew what he was talking about.

Cider is a beverage made by squeezing the juice out of apples and then fermenting it.

In the USA it is commonly available either "soft" (unfermented) or less commonly "hard" (alcoholic). In its natural state it is an opaque, brownish-red, sweet-tart fruit juice; in this state it can be served as-is (it's a traditional fall drink in this form in much of North America, particularly associated with Halloween and Thanksgiving), spiced (aka "mulled"), or filtered and carbonated ("sparkling" -- a popular substitute for alcoholic beverages for children). "Apple juice" is not always clearly distinguished from soft cider, but is generally understood to mean a form of soft cider that has been clarified and rendered shelf-stable though pasteurization and/or concentration and reconstituting. "Hard cider", at least in the forms most commonly available, is a mixed drink of apple juice with added alcohol rather than a pure fermented drink as in other countries, but (as with beer), American microbreweries have begun making it "the old way" again, particularly in traditional apple-growing regions (New England, New York, Michigan, and Washington State). "Hard" cider was a very common alcoholic beverage in the early years of the USA, during the colonial period and for about 30-40 years afterward, when the country didn't have much good land to grow grain but the climate was excellent for growing apples. In fact, Johnny Appleseed was planting trees for cider, not for eating. Most of the apple crop the was fermented to cider, although in some places a more common use was to distill the cider into a fruit brandy called "applejack", a.k.a. "Jersey Lightning" (because New Jersey was so fond of the stuff the state government used it to pay the workers building all the major roads between Philadelphia and New York in it).

The rest of the known universe[edit]

Ciders on sale at a British pub.

It is a fermented drink which is usually a pale golden liquid with about 5-6% alcohol by volume and a pronounced apple flavour, ranging from medium-sweet to bone-dry depending on the manufacturer and the market, and often carbonated. It can be further distilled into a type of brandy known as "applejack", the most famous type of which is the Norman French Calvados.

In the UK, cider has had a remarkable revival during recent years, shaking free of its longstanding associations with tramps, yokels and underage drinkers to become quite a trendy beverage. The resurgence appears to have been led by brands like Bulmers, Magners and Gaymers, which have actually been around for donkeys years but were hitherto unknown beyond the aforementioned demographics of tramps, yokels and teenagers. Fun fact: these three 'rival' brands of cider are currently owned by the same corporation. Beer manufacturers like Stella Artois and Carling have also jumped on the bandwagaon and branched out into cider.

A drink called perry is made from pears, using the same methods as are used to make cider from apples. Brands cashing in on the cider craze sometimes call this drink 'pear cider': calling it that in front of long-term perry drinkers may provoke abuse or derision.

Scrumpy is a variety of alcoholic cider made in the southwestern region of England and along the English -Welsh border. Eastern Somerset is a good place to start looking. The alcohol content of a good scrumpy is often much higher than that found in regular beer. English pubs, even those in the southwest, rarely serve scrumpy today because it is only made by small producers and most pubs have contractual ties to large breweries, and may only sell their products. Those pubs that do serve scrumpy often serve a modified form that has been filtered, watered down and carbonated. If you are in the southwest looking for true scrumpy, seek out a local cider mill.

There is a part of Germany called Hesse where people drink an extremely sour 5-10% alcohol variant of cider (and pretty much nothing else), called "Ebbelwei" (apple wine) in the local dialect, a beverage that only starts to taste good after the seventh glass. That region (around Frankfurt) is the world's largest producer of cider.

Real alcoholic cider (US hard cider) lends itself to a few mixed drinks, including the Black Velvet (Guinness and cider layered in the manner of a black and tan) and the Snakebite (IPA or bitter mixed with cider). Non alcoholic (US soft cider) is generally drunk straight, but makes for an interesting mix with whiskey, brandy, or dark rum in the fall or winter (especially if spiced, and most especially if spiced and warmed), and occasionally finds its way into some culinary uses, most notably cider donuts. Due to its reputation as a tipple of the poor, and possibly also because of the close association of the apple tree with northern European pagan religions, cider (and apples) were also a common scapegoat of 19th century Prohibitionists.

In the UK cider has a lower tax rate than any other form of alcohol making it the target of choice for products looking for the best ethanol to price ratio. By mixing the leftover apple pulp from making more conventional cider with sugar it is possible to produce so called white cider which is cheap and for tax purposes considered cider. It is drunk by 15 year olds and terminal alcoholics.

Adding water to the pressed apple pulp and pressing it again produces a low-juice liquid which can be fermented to produce a low-alcohol version of scrumpy known in England as 'ciderkin' or 'water-cider'. This was traditionally consumed by farm workers on hot days, e.g. at harvest time, to keep refreshed without either getting drunk or drinking the contaminated local water. It is now very rare.