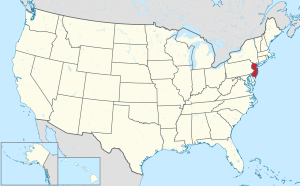 Being so close to so many big cities, New Jersey is the densest state in the whole United States.

Noo Joisey is the tenth circle of Hell, two levels below the Hidden Fun Stuff one of the United States, located an easy bridge or tunnel ride from New York, Pennsylvania, or Delaware. Because no one would ever pay to get into New Jersey, all tolls are charged to get out.

Important: Nobody who actually lives in New Jersey refers to it as "Joisey." Only assholes from Brooklyn say that. (In case you're curious, the natives pronounce it "Jezzy".)

One half of the state is unjustly derided for being an industrial wasteland, populated by people who couldn't really make it in the Big Apple (often called the "armpit of America" by snarky Pennsylvanians), while the other half claims fame as the "Garden State". People from the ugly half go to the pretty half for their honeymoons and beach vacations.

Truthfully though, New Jersey is neither as good as its residents will tell you it is, nor as bad as New Yorkers and Pennsylvanians say it is. People misjudge the state because they think the entire place looks like Trenton what you see while driving the northern half of the New Jersey Turnpike.

New Jersey is a state with many extreme contrasts: extreme wealth (northern Bergen and eastern Morris County, parts of Hunterdon and Mercer Counties) and dire poverty (Camden, Trenton, Paterson, parts of Asbury Park, Newark, Jersey City, and Atlantic City); lush farmland and forest (much of South Jersey, parts of Sussex, Warren, and Morris Counties) and industrial clutter and pollution (much of Middlesex, Union, Hudson, and Essex Counties); social progressivism (relatively liberal politics, with the Religious Right having little political clout) and backwardness and corruption (many of the state and local governments); high culture (Princeton and... okay, we give up) and a total lack of class (Newark, Camden, Trenton, the suburbs, the entire Jersey shore).

New Jersey is one of only two states in the US to deny people the right to pump their own gasoline at a gas station, the other being Oregon. Some consider this to be an appalling human rights infraction and a nuisance... and simultaneously take it as something to be proud of, plastering their cars with bumper stickers reading "Jersey Girls don't pump gas." In addition, New Jersey has relatively strong gun control laws that are undoubtedly the result of crime in the state's urban areas.

The state is a major global center of the pharmaceutical industry. Johnson & Johnson, Merck, Novartis, Bristol-Myers Squibb, Sanofi, Bayer, and other major pharmaceutical and biotech companies are all headquartered in the Garden State, leading to the nickname "America's medicine chest", even if some of the lab work has been outsourced to Massachusetts in recent years.[1][2] In other words, if Mike Adams is to be trusted, the headquarters of the New World Order isn't in a candlelit temple beneath Yale University or in a clearing in the California redwoods, but in an office park in East Hanover or Woodbridge.

It is also (as of April 2015) the only state in the US where limited online gambling is permitted by law (games of chance only, not sports betting).

When people from New Jersey meet each other outside of the state, the proper way to ask each other's Jersey location is "Which Exit?" (pronounced egg-zit).

visiting their communities, ignoring the fact that the local economy is almost entirely reliant on tourism.

New Jersey was created when G-man decided he needed a place to put all those Loving followers of Jesus. He then placed it one level below Cthulhu, built a few buildings and called it a day. When Fred Phelps finally died, he discovered himself in a shabby town with three houses and declared himself governor. To this day, New Jerseyites credit him with founding the town even though he is currently in the mental asylum getting poked with a stick by a monkey. The 2nd/current Governor, Assfly is much less liberal and created policies that included throwing anyone who dared disagree with the governor into the vast void that is the eleventh circle of hell.

New Jersey is conspicuously the only US State without an official state song. While the uptempo song "I'm From New Jersey", written and composed by Red Mascara, was passed by both legislative houses in 1972, it was never signed into law by the Governor.[3][4]

In the late 1980's, New Jersey Network (NJN), the precursor to the current public broadcaster NJTV, apparently got tired of not having an official state song. So, NJN hired composer Jerome Gilmer (a resident of Aurora, Colorado, go figure)[5], to compose and record a "TV sign-off song" that reflected the values of the state. The rather mellow song "Positively New Jersey" was used to end the broadcast day of the NJN stations before they switched to 24 hour broadcasting.[6][7] In the 1990's, Gilmer re-wrote new lyrics for the song for the city's local cable TV service as "Positively Aurora".[8]