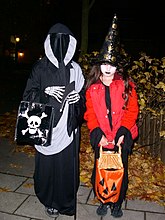 Wouldn't they just love it if someone put some Jack Chick tracts in their bags? 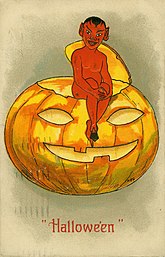 Proof that Halloween is the most Satanic of all holidays.

Halloween is a traditional celebration that takes place on 31st October each year. It is mostly widely celebrated in the USA, Canada, Ireland and the UK. A celebration of all that is ghostly, ghoulish and long-leggedy, it involves such activities as children (and sometimes adults) dressing up in costume, faces being carved into pumpkins, and horror films of varying quality being shown on television.

The name comes from the Scots Hallow E'en, meaning "All Hallows Eve",[2] the day before the Christian holiday of All Hallows or All Saints' Day

Fundamentalist Christians often oppose Halloween. A prime example was Jack Chick; in his tract The Devil's Night, Chick claimed that Halloween originated in pre-Christian England, where pagan priests of Satan (pre-Christian beliefs and devil-worship being interchangeable in Chick's world) worshipped a death god named Saman, portrayed in an illustration as a grim reaper figure. According to the tract, trick-or-treating derives from the pagan priests' practice of going door-to-door and asking for offerings of food for their gods; if food was not given to them they sacrificed one of the household's children instead, leaving behind a jack-o-lantern to show that no-one else in the house would be harmed.[3] Another of his tracts, Boo, delivers a similar story but also claims that the human sacrifices are still being committed by modern Satanists, and muddies its history even further by showing one of the pre-Christian druids carrying an Egyptian ankh.[4] Both tracts depict pumpkins being used as jack-o-lanterns, despite pumpkins being unknown in Britain at the time, but this is really the least of the problems.[notes 1] The same claims about Halloween were earlier published by Chick in his 1978 Crusaders comic book Spellbound?, which also claims to locate the origin of rock music in the Druids. Chick's main source for Spellbound? was John Todd.

Similar claims were made by David Brown in a 1998 book on Halloween. Brown claims that trick-or-treating is derived from the practice of offering food to demons;[5] that the modern image of the grim reaper was based on the Celtic death god Saman or Samhain;[6][notes 2] that Halloween costumes date back to a practice of wearing animal skins during sacrificial ceremonies; and, citing an unnamed book, that jack-o-lanterns originated as signs that households were sympathetic to Satanists.[5]

In response to Brown's book, neopagan commentator Kerr Cuhulain argues that Samhain was not a death god, but rather a minor deity associated with cattle - the Celtic death god was named Gwynn Ap Nudd, Bile, Donn, Beli, or Arawn, depending on the location. Cuhulain suggests that the idea of Samhain as a death god originated in Ray Bradbury's 1973 novel The Halloween Tree.[7] The name Samhain is in fact of ancient attestation; a month Samonios appears on the Coligny Calendar from Roman Gaul, where it marks a summer month.[8] Samhain as a month or time of the year is well attested, but there is no evidence that Samhain was the name of a deity. The entire notion of Samhain being associated with a Celtic deity originates from British military engineer Charles Vallancey, who had inaccurately documented the lore and language of the ancient Celts in his book, Collectanea de Rebus Hibernicis in 1786.[9] As with Beltane, the chief means of observing Samhain was the building of bonfires. This part of the tradition in the British Isles got handed off to Guy Fawkes Day five days later. In many places of the British Isles both Halloween and Samhain were neglected until the custom was (re)-imported from the United States in the late twentieth century.[10]

The actual source of the association of Halloween with the dead is the fact that it is, like the name says, the eve of All Hallows Day. This Roman Catholic liturgical feast commemorates the Communion of the Saints, the body of believers who have died and are now with Christ in Heaven.[11] The same Catholic commemoration was exported to Mexico, where, under possible Mesoamerican influence, it became the Day of the Dead

. The Aztecs may be entitled to part of the credit for that festival, which in turn influenced Halloween in the United States, but ancient Celts had nothing to do with it.[10] The demonizing of All Hallows by Christian fundamentalists is especially peculiar, given the fact that death, resurrection, and the afterlife loom fairly large in Christian belief, and the existence of a holy day meant to call these things to mind seems like something you would expect.

Other sources of fundamentalist misinformation about Halloween include Mike Warnke's 1979 album A Christian Perspective On Halloween, and Phil Phillips' 1987 book Halloween and Satanism.

In 2011, Paul Ade, a pastor from Calgary, Canada, put forward the idea of Jesus Ween as a Christian alternative to Halloween. According to Ade, participants in Jesus Ween should shun costumes on 31st October and should wear white clothes as a symbol of righteousness instead. They should also give out Bibles instead of candy to trick-or-treating children.[12] Jesus Ween drew some media attention in October 2011. It was even parodied in a sketch on the American late night talk show Jimmy Kimmel Live! The sketch features unhappy-looking children dressed in white. A boy says that Jesus Ween is better than Halloween without any enthusiasm. A girl is obviously not pleased when she is given a Bible instead of candy. Towards the end of the sketch, all of the children proclaim, "I'm a Jesus Weener."[13] The stupid name[notes 3] that does nothing but invite dick jokes might be one of the reasons why Jesus Ween failed to catch on.

Of course, it's not just Christians that get their knickers in a twist over Halloween. Muslims can sometimes be found spouting the same bollocks about the evils of the holiday as its most outspoken Christian opponents..[14]

Faces carved into autumn vegetables are a common part of Halloween, with pumpkins popular for their large size and ease of carving, although in Great Britain and Ireland other local vegetables such as turnips were traditionally carved. They are generally believed to have originated in Ireland or Britain, later to spread to the US, where they were adapted to local gourds.

There are claims that this is a pagan survival, but this is dubious as there is no evidence that the tradition is anywhere near as old as pre-Christian Ireland. They are sometimes linked with medieval Irish myths of a trickster called Stingy Jack who played tricks on the Devil, and was not allowed into Heaven or Hell and forced to wander the earth forever, carrying a burning coal to light his way.[15] However this theory has been disputed due to the lack of a clear link with the carved vegetable.[16] It's not clear how old the tradition is, but links to pre-Christian practices are tenuous - Wikipedia mentions various 19th century sources from Ireland, and a Smithsonian Magazine article also mentions 19th century sources.[17][18] Linguistic evidence shows the term "jack o' lantern" was formerly a name for a watchman, dating back to the 17th century, and also applied to will o' the wisps, before in the 19th century being linked to illuminated vegetables.[16] Perhaps it is a 19th century custom.

Dressing up in costumes is sometimes linked to pre-Christian Samhain rites, when people would probably dress up (although possibly not as sexy zombie schoolgirls).[19] An alternative explanation lies in the Christian practice of "souling" which involved dressing up like the spirits of the dead, going door to door, saying prayers for the dead, and begging for food (hence perhaps a connection with trick or treating), connected with All Soul's Day on November 2.[20][21] In Poland there is an old tradition of wearing masks, going to cemeteries, and communing with the dead on the festival of Dziady, held at the same time as Halloween; this is also claimed to be pagan in origin (but presumably not the same pagans as in Celtic tradition).[22]

The practice of going door-to-door asking for sweet treats (or occasionally money) is another part of Halloween that is somewhat controversial but still very popular. Often children will do a song or similar party piece: people in Britain get very upset with the idea that Americans just ask for money and are given it, while Scottish children will give a half-hearted, tone-deaf version of the shortest ditty they can think of.[23] But if they wouldn't beg for sweets how would they get candy stuffed with razor blades?[24]

Halloween has features in common with other late autumn and winter traditions; these come after harvest rituals celebrated around September in much of the Northern Hemisphere, and probably mark the start of winter when farming is over and people do little other than stay indoors and tell stories.

The Day of the Dead (el Día de los Muertos) is a Latin American festival celebrated at the start of November, involving commemorating the dead with altars decorated with effigies and symbols of the dead; skulls; butterflies; flowers; dancing and music. It appears to derive from pre-Colombian traditions remembering the dead, linked with the Catholic rites of All Saints Day (November 1) and All Souls Day (November 2).[25]

Dziady is a Slavic tradition where people go to graveyards to remember the dead and leave offerings, as well as lighting fires. Although opposed by Christian authorities, it was popularised in the Romantic era (early 19th century) by Polish literary titan Adam Mickiewicz. It is often linked with pagan Slavic traditions.[22] 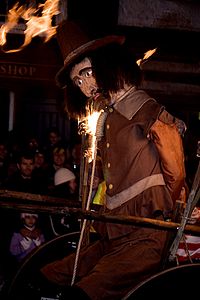 Remember, remember the Fifth of November.

Samhain (or Samain) was a pre-Christian Irish seasonal feast held at the start of winter, reckoned the most important festival of the year, with a gathering at Tara every third year, feasting, lighting of fires, and possibly fertility rites.[26] In legend it was strongly associated with the dead, monsters, human sacrifice, and evil forces, with many such events being stated to have happened at Samhain.[26] Some traditions say it is the night when those who died over the previous year moved onto the afterlife, or when the dead returned to walk the earth, and is commonly said to be the source of Halloween traditions in the United States, via Irish immigrants (although it is unlikely to the the only source). It is associated with various spooky stories such as the tenth century Nera and the Dead Man, about a man who is dared to hang branches on the body of a dead man, and the body comes to life. Exact details of Samhain worship are unknown, but it appears to have involved food and costumes.[27]

Souling and the giving of soul-cakes were, and in some cases still are, Christian traditions associated with Allhallowtide (All Saints Eve, All Saints Day, and All Souls Day) in many parts of Europe. It often involved drinking beer, going door to door, children begging for food, and giving or receiving soul-cakes, a shortbread-like cookie. It was associated with Roman Catholic doctrine about helping the souls of the dead through Purgatory.[28][29]

Guy Fawkes Night (or Bonfire Night), celebrated in Britain on November 5 to mark the failure of Guy Fawkes' attempt to blow up parliament, or if you prefer to celebrate the chance of blowing up parliament, has become confused with Halloween. Similarities include the tradition of begging "penny for the guy" similar to the tradition of asking for money or food on Halloween; the practice of bonfires; and general merriment.[30] As always happens with popular culture, elements are mixed freely and folk traditions concocted to meet both the desire for entertainment and deeper political and sectarian needs, as in Northern Ireland, an area particularly fond of setting fire to things.[31]

There are also traditions around wassailing linked with midwinter, such as Mari Lwyd

in Wales (which has spooky elements, principally a horse's skull carried from house to house), and Wassailing

(and Yulesinging) in England, in which people go house to house seeking refreshments, singing, and engaging in tomfoolery.[32]