You may have been looking for one of these articles instead: Washington, D.C., George Washington 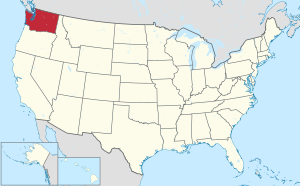 Weather that rivals London.
File:WA winner.gif
Salmon roasted over the sulphurous embers of an active volcano. A tasty treat!

Washington, sometimes called "Washington State", "the other Washington" or the "good Washington", is the northwesternmost state in the contiguous United States.

It is named for its first permanent settlement, which was founded where trappers and traders used to gather every few weeks to scrub their dirty apparel.

The official language of Washington State is Chinook, widely spoken by loggers, fur trappers, fishermen, and drunken grunge music fans. Typical words in Chinook include muckleshoot (which means to give the casino all your money) and skookumchuck (which means to blow salmon chunks).

Washington is divided into western and eastern halves by the rugged Cascade Mountains, both physically and culturally. People on the (super-duper) wet side of the mountains are very liberal, diverse, and love a good non-GMO organic vegan Starbucks latte in a cup made from recycled plastic with smoked salmon for breakfast. People on the dry side, however, are mostly Karens either White or indigenous farmers who vote very differently and strangely; most of them vote Republican except in Whitman County, as it is home to the WSU campus. You probably shouldn't call them out on this, though, as the dry side of the mountains used to be in the nuke-making business.

Washington is notorious for joke and crank political candidates. "Mike the Mover" (his real name) and "Prophet Atlantis" (his real name) are on the ballot seemingly every election for some office or another. Spoof ballot initiatives are also common. In the 1990s, the religious right attempted to put an initiative on the ballot banning adoption by homosexual couples. In response, a competing initiative was filed to ban adoption by right-wing Christian fundamentalists. The initiatives had otherwise identical wording. Later in 2003, in response to a several-years-long rash of initiatives filed by libertarian activist Tim Eyman, another activist filed an initiative to have the voters proclaim Tim Eyman a "Horse's Ass".

One annoying aspect of living in a state that shares its name with the nation's capital is that, during campaign season, it's common to see ads portraying political opponents as being more sympathetic to the culture of the other Washington than to that of the State of Washington.

The following two videos from the 2010 campaign are typical. Both candidates were running for the same seat that was being vacated by a retiring congressman. The highest elected office either of these candidates has held was in the Washington State Legislature. Neither have ever been elected to a statewide office.

Okay, everyone sing screech along. "Everything sucks / everything's my fault / I'm a creep / I'm so depressed / MAAAARY! / Black hole sun / my dad's a heroin addict / and Jeremy spoke in claaaass todaaaay"

Not suprisingly there's a widespread movement to get rid of this song.

The Cascade range has a row of active volcanoes, Mt. Adams, Mt. Baker, Mt. Rainier, Mt. St. Helens, and Glacier Peak. St. Helens erupted in 1980 and blew its top, clogging air filters and blotting out the sun from Seattle to Yakima and creating a thriving cottage industry of trinket sellers making tourist souvenirs made of "real Mt. St. Helens ash". Any of the other volcanoes could erupt at any time. You have been warned.