To Train Up a Child 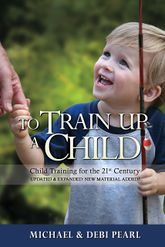 It has a cute smiling child on the cover so it must not be child abuse!

To Train Up a Child is a vanity-published book of "child-training" techniques, written by a pair of egotistical abusers, Michael and Debi Pearl, an Independent Baptist couple, who are well-known in fundamentalist circles (and to the police and child protective services).[citation NOT needed] The title is is derived from Proverbs 22:6:

This book claims to espouse "simple, Biblical principles". Unfortunately, slapping a carnival mask on a serpent does not turn it into an angel, and likewise neither does calling something "Biblical" make it so. But this is not something the Pearls would know beans about, as they have no credentials either in theology or anything relating to child development.

The Pearls start off by thumbing their noses at the liberal elite with the disclaimer: "This is not a theory; it is a practical reality which has been successfully applied many times over." That said, practice does not normally appear in books, especially those full of content that appears to have originated in their authors' large intestine. But the Pearls appear to have a deep distrust of books with content in them, perhaps because they subscribe to New World Order conspiracy theories: "If you want a child who will integrate into the New World Order and wait his turn in line for condoms, a government[-]funded abortion, sexually transmitted disease treatment, psychological evaluation and a mark on the forehead, then follow the popular guidelines in education, entertainment and discipline, but if you want a son or daughter of God, you will have to do it God's way."[1] Even more ridiculously, they speak approvingly of God placing the tree of knowledge where Adam and Eve could get to it, leaving some questions as to whether they know how that particular example of discipline worked out.

Having introduced the topic, the book then jumps to a heartwarming domestic scene, in which small children (young enough still to be in diapers) are running in and out of doors, squabbling over toys, begging for a snack, and generally behaving in the manner befitting their age.

This behavior, of course, had the tendency to interfere ever so slightly with a conversation held between the Pearls and these children's parents. Hence, the Pearls react in a highly sensible manner by immediately concluding that such children are capable of giving "an electric wheat grinder a nervous breakdown", and compare their parents to Holocaust victims on the way to the concentration camp.

That these children should be behaving like this, they say, is because their mother wrongheadedly neglected to "conquer their wills" by repeated beatings with such implements as lengths of plumbing, so as to ensure that they obeyed authority-figures unquestioningly.

No thought is paid to the situation in which the child is commanded to perform a "sinful" act; the focus is not on making good Christians or even moral beings out of them, but instead obsessing over smashing the unquestionably Satanic Strong Will. The Pearls would do well to weaken their own wills against the medical and civil authorities they defy with their words, as it is written,[2] and stop referring to them as the "Gestapo".[3]

This unquestioning obedience is the sort generally demanded of a dog or a horse (though they show deep contempt for the possession of what in equine behavior would be called "horse sense"), and indeed, the Pearls seem to equate small children to dogs or mules when it comes to the way in which they are to be treated. The book describes a scenario in which a father spends 45 minutes spanking his 12-month-old son for the unspeakable crime of declining to stay in his lap; this is compared to horse-training methods. One wonders what must have been going through the child's head at the time. Does he understand that his father is hurting him because he wants his son to stay on his lap, and that the pain will cease when he stops struggling, OR, does he think that his father is only forcing him to stay there because he wants to keep hitting him? If a baby bites his mother's nipple while nursing, the baby is to have his hair yanked, ignoring the fact that a child that young would not be able to understand the connection between their "crime" and the punishment. The Pearls hold a moment's inconvenience on the part of the parent as equivalent in severity to an accident in which many people die.

They also seem to have a disdain for children in general; they appeal to the sense of "relief" that the parent would feel if all their children were silently obedient, then have the gall to claim elsewhere that they "decry" corporal punishment performed for "self-interest".[4]

Further, this disdain is greatly amplified by paranoia. If an infant does the unthinkable and starts crying, he has started an epic battle of wills. If a child in the grocery store screams for ice cream, he turns into a "terrorist" engaged in advanced psychological-warfare tactics. If a parent promises a child the said ice cream as a reward for good behavior, the kid has just become a made man in the Mafia, and (what is worse) a boss in a labor union! (Just naturally the Pearls would have disdain for labor unions; they go so far as to sneer at their opponents by calling them "spanking abolitionists".[4])

Following up the remark comparing harried parents to Holocaust victims, the Pearls opine that those who neglect to follow their fantastic method are making Nazis out of their children, and possibly candidates to enter the "Gestapo," as they term the average American police force of today. In aid of shedding light on this comparison, let us compare Hitler's views on the discipline of children to the Pearls', and see how they stack up.

Yes, it seems that the Pearls have done the impossible, and made Mein Kampf appear moderate on that subject. Psychological projection much?

Interestingly, their comparison of the intelligence of cats vs. dogs seems to mistake stubbornness for an absence of intelligence as well as acquiescence for intelligence. It also suggests that ALL children lack the stubbornness characteristically seen in cats, and all but forgets that dogs are willing to agree with just about anything.

Needless to say, these raving loonies' (this-is-not-a-)theory has some very nasty consequences in the event that a child's will is made of anything more substantial than wisps of cloud. Lynn Paddock, of Raleigh, North Carolina, a practitioner of the Pearls' philosophy, was charged with first-degree murder and felony child abuse after she endeavored to break the will of her adopted son by smothering him in blankets, in consequence of which he died of asphyxiation. She also was accustomed to smashing some of her other adopted sons with a piece of plumbing bought particularly for the purpose, at the Pearls' explicit recommendation.[1][5]More recently, an adopted seven-year-old girl was whipped to death by the same method for the unspeakable crime of mispronouncing a word.[6] On November 15, 2013 Larry and Carri Williams were sentenced to life in prison for the death by abuse of their adopted and home-schooled daughter Hana who was found naked and emaciated in a yard dead from hypothermia and malnutrition.[7]