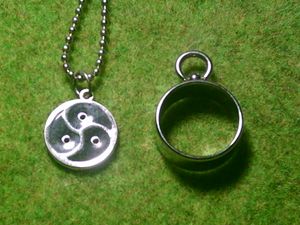 and the Ring of O,

The second symbol, the Ring of O, is used more in continental Europe, and is widespread in use throughout the German speaking BDSM community. Very, very loosely based on the ring that the fictitious female character wears in the series of novels "The Story of O," the ring consists of a a large steel ring with an attached smaller ring which can be swivelled. The wearing of the Ring of O can also carry greater symbolism than just identifying the wearer as a member of the BDSM community. When the ring is worn on the left hand it can indicate that the wearer is a top, or dominant, whilst wearing it on the right-hand indicates a bottom, or submissive. In such cases a dom would normally wear the ring on the left hand so that their right hand isn't wearing a heavy, metal ring that could cause unintentional damage during use, whilst a sub wears the ring on the right hand to indicate a symbolic binding and surrendering to their dom. Obviously, this can mean that the symbolism can be reversed for people who are left-handed and so the wearing of the Ring of O can't be used as a reliable guide to a wearer's preference.[note 4]

Other Christian groups interpret certain Bible passages to mean that a D/s relationship is in fact supported by Christianity, some going as far as to say it is the only way to have a good Christian relationship.[14] This involves the man as the head of the household with the wife in submission to him (with both in submission to God). Marriage vows, for example, traditionally include the phrases "love, honour and obey" for the woman, and "love, honor and cherish" for the man, which, although the phrases are becoming less common, may be reinstated by a couple in a D/s relationship who are getting married and would like to drop a subtle hint. Almost invariably, support for these types of relationships by religion imply that the man is the dominant and the woman is the submissive, with no provision for the often naturally reversed scenario. Christianity also seems to make no admission of partners who "switch". [15]

Another way to be mean to Christians is to point out the B&D story of the Christ on the cross. OK, there's some S&M there, too. And it's easy to enjoy the story – if you are the beneficiary and not the victim.