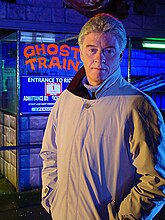 Derek Acorah (1950–2020), born Derek Francis Johnson, was a British TV actor taking the role of a psychic medium, most notably on the television series Most Haunted. He had also done other shows including Predictions with Derek Acorah and Derek Acorah's Ghost Towns[1] and performed a stage act. Derek Acorah was exposed as being a bit of a chancer in the early 2000s, and after that his following was more "ironic" than "iconic".

Nearly all these entities Derek channeled coincidentally spoke with the same strong Scouse (Liverpool) accent he had, no matter where they came from. (If you don't know what Scouse sounds like, think of how the Beatles spoke, but rougher sounding in Derek's case. Kim Cattrall once spoke like this too, believe it or not.)

Derek has now passed over to the other side himself, where he spends his time apologising to all the dead people who featured on his shows.

Acorah's driving license was revoked for 28 months after the car he was driving struck another motorist's, causing the driver to have whiplash.[6]

The "should have known this was going to happen" joke was wheeled out again in March 2017 when a stage appearance was cancelled at the last minute by Acorah when he wasn't paid the fee he expected, and turned into a near-riot.[7]

Acorah's show Most Haunted has been the subject of many complaints to broadcasting watchdogs. In 2005 viewers complained that the show was deceiving viewers by claiming the paranormal was real. However TV watchdog Ofcom ruled that the show was not to be taken seriously, finding it went "beyond what we believe to be a generally accepted understanding of what comprises a legitimate investigation" and "should be taken to be a programme produced for entertainment purposes".[8] In 2013 a complaint was upheld for scaring children.[9]