Helen Duncan (1897-1956), nicknamed "Hellish Nell", was a Scottish medium well known for producing fake ectoplasm made from cheesecloth. She was the last person to be imprisoned under the British Witchcraft Act of 1735, when she was jailed in 1944.[1] Because of this she has become a martyr for spiritualists, Wiccans, and a certain number of feminists who see her as part of a tradition of persecuted wild women. The reality is that she was a fraud, prosecuted for fraud. 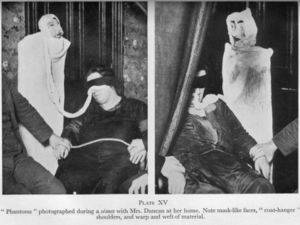 Duncan in a séance with fake spirits. Click to enlarge.

In 1928 during a séance Harvey Metcalfe took flashlight photographs of Duncan which reveal fraudulent ectoplasm "spirits" such as a doll made from a painted papier-mâché mask draped in an old sheet. In 1931 the London Spiritualist Alliance examined Duncan's mediumship and concluded she was a fraud. An early examination of pieces of Duncan's ectoplasm revealed it was made of cheesecloth, paper mixed with the white of egg and lavatory paper stuck together. Duncan refused to be investigated by the Society for Psychical Research, even claiming she wouldn't do it for a million pounds; however, she was investigated by some psychical researchers such as Harry Price.

One of Duncan's tricks was to swallow and regurgitate some of her ectoplasm and according to Haynes (1982) she was persuaded to swallow a tablet of methylene blue before one of her séances by the London Spiritualist Alliance to rule out any chance of this trick being performed and no ectoplasm appeared. An investigation by the psychical researcher Harry Price into the mediumship of Duncan revealed she was using natural substances such as cheesecloth and eggs mixed with paper as ectoplasm in her séances (see below). It has also been suggested by some researchers that Duncan achieved some of her tricks with the help of an accomplice. In 1933 at a séance in Scotland a little girl called Peggy emerged in the séance room, someone grabbed her and the lights were turned on and the spirit was revealed to be Duncan. She was prosecuted and fined £10. Later Duncan was caught cheating again, pretending to be a spirit in the séance room; this time Duncan and four of her traveling companions were prosecuted, convicted and sentenced to nine months in prison.

Duncan with a roll of cheesecloth.

The psychical researcher Harry Price investigated Duncan at his laboratory and exposed her as a fraud in 1931. Because Duncan had been swallowing natural substances to regurgitate in the séance room for her ectoplasm, she declined to be X-rayed by some of the psychical researchers who investigated her, went out into the street and made a scene. According to Harry Price in a report of the mediumship of Duncan:

Harry Price and his team of investigators took many photographs of Duncan which revealed her fraudulent ectoplasm to be made from cheesecloth, rubber gloves and cut-out heads from magazine covers which she would pretend to her audience were spirits. Following the report written by Price, Duncan's former maid Mary McGinlay confessed in detail to having aided Duncan in her mediumship tricks, and Duncan's husband admitted that the ectoplasm materialisations were the result of regurgitation.

There is a myth about Helen Duncan, that during World War Two she was conducting seances and exposing British naval secrets.[3] As a result, the story goes, the state put her on trial for witchcraft, as it has done to many other strong, independent women over the centuries. Scottish paranormalists Full Moon Investigations led a campaign to have her pardoned as an example of the unjust persecution of witches, herbalists, and medicine women.[4] Andrea Byrne of Full Moon called her "the Joan of Arc of the spiritualist movement".[5] One Australian Spiritualist church claims she was "a simple Scottish housewife, who was forced to serve time in London's notorious Victorian Holloway women's prison for the appalling 'crime' of holding physical phenomena séances".[6] This isn't entirely accurate.

It is said that she exposed a military secret, the sinking of the HMS Barham with the loss of 861 men in 1941, at a spiritualist meeting in Portsmouth in November that year. The truth is that the sinking was not a state secret: it had not been widely publicised by the government, but the families of the 861 men had been informed of the circumstances, Portsmouth was a city with a large naval population, and there had been one press report about the sinking.[7] She claimed to have spoken to the spirit of a seaman with a hat band that said "HMS Barham", but in wartime the navy was more secretive and hats did not carry ship's names.[8] If you were a fake medium in a naval port during wartime, one surefire cold reading trick would be to keep an eye out for reports of ships that had sunk with all hands, because it's almost certain someone would be connected.

She was investigated by authorities for some time following that seance in November 1941. It is suggested that the authorities finally took action because they suspected she was a spy and because of the approach of D-Day, a vast secret undertaking which could not be endangered, and she was arrested on 19 January 1944.[1][3] She was not charged with witchcraft, but was prosecuted for staging fake seances under section 4 of the Witchcraft Act 1735.[7] This criminalised those who "pretend to exercise or use any kind of Witchcraft, Sorcery, Inchantment, or Conjuration, or undertake to tell Fortunes, or pretend, from his or her Skill or Knowledge in any occult or crafty Science, to discover where or in what manner any Goods or Chattels, supposed to have been stolen or lost, may be found".[9] The key word here is "pretend", and she was convicted of staging fake seances, and sentenced to 9 months in jail.[1]

One other curiosity is that despite widespread claims, she was not the last person to be convicted under the 1735 Witchcraft Act: that honour went to Jane Rebecca Yorke later in 1944, but she received only a fine rather than prison because of her advanced age.[1] The act was repealed in 1951 and replaced with the Fraudulent Mediums Act 1951.[1][10]

In 1956, the Nottingham police raided another of Duncan's séances and found evidence of fraud. She became ill and died after a month, 59 years old. Contrary to what spiritualists have written there was nothing odd about her death and it was not caused by her "trance" being disturbed by the police. Duncan's medical records showed that she had a long history of ill health and as early as 1944 she was described as an obese woman who could only move slowly as she suffered from heart trouble.[11]