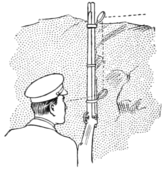 Remote viewing is the supposed ability to view places, people, and activities at any place, without being there personally and without aid of cameras. Usually this results in the remote viewer drawing what they "see," often "through the eyes" of a target person.[1] It is one of multiple claimed psychic powers. This has obvious application in espionage, both political and industrial, and because of this once received much genuine attention by educational and governmental organisations. The word quantum often crops up in contemporary "explanations" of remote viewing,[2][3] and like other uses of the word at the macro level, it's a tip-off that it doesn't actually work.

To date there has been no conclusive demonstration of "remote viewing". The claimed successes rely on over-interpreting very vague drawings and scribbles (see shoehorning, the Forer effect, and pareidolia) or outright fraud. For instance, one remote viewer, Joseph McMoneagle, reported the following when remote viewing through a volunteer who had been sent to one of four locations for a test on the Put It To The Test TV show in 1994:

Clearly, these are incredibly vague claims, with things such as rivers and water features, perpendicular lines, and noise being a good bet for any location in the area McMoneagle knew they were sending their target. The most specific statement, about the platform with a stripe, didn't match any of the potential locations at all. Despite this, the Put It To The Test show still concluded that remote viewing was genuine.

In one CIA test (see Operation Stargate and below), the following result was obtained by a remote viewing experiment of a series of images: 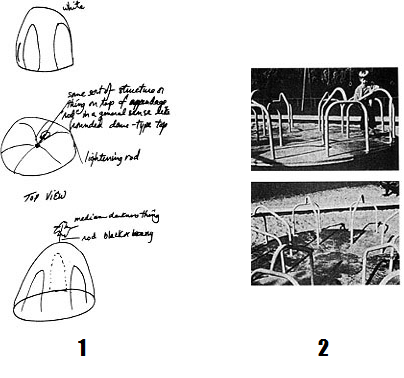 No.1 is the remote viewing drawing, while no.2 is the original source that was meant to be viewed. Now, bear in mind that this has been hailed as one of the successes of the experiments into how the process works and how much promise it would show. But there are many striking differences that the remote viewer failed to notice or got wrong, such as:

But let's not get too bogged down in details, let's look at what they got right!

Perhaps the only solid evidence that proponents have ever put forward to the validity of remote viewing is that it was once taken seriously by the intelligence community. Although really this just proves how desperate and gullible intelligence groups can be (but remember, these were people who could have just paid a bunch of people to shoot Castro, and instead preferred exploding cigars and booby-trapped sea shells). The CIA spent millions of dollars on a program known as Operation Stargate, wasting millions of dollars on this crap.[4] They did this because the Soviet Union was spending millions of rubles investigating the same thing, and policymakers feared a "remote viewing gap." "Star Gate" and its related projects were eventually shut down with all funding for psychics stopped when it failed to produce tangible results:[5]

"Star Gate" is a Defense Intelligence Agency (DIA) program which involved the use of paranormal phenomena, primarily "remote viewing," for intelligence collection. During Star Gate's history, DIA pursued three basic program objectives: "Operations," using remote viewing to collect intelligence against foreign targets; "Research and Development," using laboratory studies to find new ways to improve remote viewing for use in the intelligence world; and "Foreign Assessment," the analysis of foreign activities to develop or exploit the paranormal for any uses which might affect our national security.

Despite the lack of funding, the scrapping of the programs, and all information relating to them now being publicly released in 1995, some believers had an alternative view: that Stargate was shut down by an evil skeptic conspiracy in order to conceal the truth from the world on the entirely specious grounds that the more experimenters excluded biases and confounders, the more the effect vanished. As one essayist on the subject notes:[6]

Regardless of one's a priori position, however, an unimpassioned observer cannot help but attest to the following fact. Despite the ambiguities inherent in the type of exploration covered in these programs, the integrated results appear to provide unequivocal evidence of a human capacity to access events remote in space and time, however falteringly, by some cognitive process not yet understood. My years of involvement as a research manager in these programs have left me with the conviction that this fact must be taken into account in any attempt to develop an unbiased picture of the structure of reality.

There is, of course, a Hollywood version. The Men Who Stare at Goats, starring Kevin Spacey, George Clooney, Ewan McGregor, and Jeff Bridges, is a mildly amusing 2009 take on the purported paranormal program based loosely on events and military projects mentioned in the 2004 book of the same name.