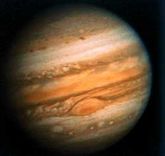 Jupiter is the fifth planet in the Solar System, counted from the Sun, and the largest planet in the solar system. It is named after the chief Roman god (or Zeus as he was known to the Greeks). It is categorized as a "gas giant." This is a reference to the low density of the planet, as most of it

is composed of hydrogen and helium, not to its manners.

One of Jupiter's more fascinating features is the Great Red Spot, a huge weather system in its atmosphere that resembles a terrestrial cyclone - it can be seen in the above picture as that large red mouth/eye-like thing-, except for its relatively consistent appearance and its persistence (it has been observed for more than a century). Data from the Juno mission[1] suggests it extends relatively deep (hundreds of kilometers) into Jupiter's atmosphere.

In 1994 (was it really that long ago?) the comet Shoemaker-Levy 9, after breaking into fragments, collided with Jupiter. This was the first observed example of extraterrestrial objects colliding. The resultant "dark spots" in the Jovian atmosphere ranged up to 12 000 km (approximately equal to the diameter of the earth), but dissipated in under a day.

"Jupiter ignition" refers to the notion that Jupiter can be turned into star, popular in some crank/conspiracy theorist circles. It probably originates with the fact that Jupiter and other gas giants are sometimes called "failed stars" in popular science. It was a plot point in Arthur Clarke's 2010: Odyssey Two, where the second Monolith starts multiplying and "ignites" Jupiter by increasing its density. The main problem is that Jupiter simply doesn't have enough mass to sustain a star-like nuclear fusion reaction. There are objects that stand on the boundary between gas giants and stars — brown dwarves — but the lower boundary of their mass is about 13 times the mass of Jupiter, and a full-fledged star has to be at least 75 times the mass of Jupiter.

The idea has different permutations and is usually dusted off every time some major event happens on Jupiter. One possible originator of the conspiracy twist is Richard Hoagland, who said back in 2003 that NASA crashing the Galileo spacecraft into the planet would "ignite" it into a star. His "theory" being that the tiny amount of plutonium-238, that is used to power the craft through radioactive decay, would be crushed in the exceptionally high pressure of the atmosphere. This would cause an atomic explosion which, like a hydrogen bomb, would cause the surrounding material to undergo nuclear fusion and turn Jupiter into a new star.[2] Because to him all stars need is hydrogen and fire to be stars, mass doesn't matter, nor does the difference between the deuterium/tritium mix used in a hydrogen bomb and the light hydrogen inside Jupiter as well as that Pu-238 is useless for the manufacture of nukes. He has never explained why anyone would want to do that, since at worst we would all die from radiation or the Earth would be torn apart by tidal forces and at best planetary orbits could become a mess.[3][note 1]

Jupiter has dozens of moons as well as a faint ring system. Its most famous moons are those discovered by Galileo—another reason why he got in trouble with the Church, as that conflicted with geocentrism. One of the primary arguments for a geocentric universe is that, if Earth went around the Sun, then the moon would be left behind, as gravity was not yet understood. Yet here was Jupiter, clearly dragging four objects along its orbit, raising the question of why Earth couldn't do the same with the moon.

While Galileo is credited with discovering them, their modern names were given by Simon Marius, who independently thought to point a telescope at Jupiter and saw the same moons. The moons are all named after girls (and guys) that Zeus/Jupiter shagged according to Greco-Roman mythology.

The largest, Ganymede is the largest moon in the Solar System, having more volume than the planet Mercury, though less mass and therefore less density. Before light and air pollution became an issue, Ganymede may have been visible from Earth with the naked eye. It was discovered in March 2015 that Ganymede has a subsurface ocean like Europa is thought to. This was confirmed by measuring Ganymede's aurora and finding that it was stable relative to the moon's surface. For a solid object, this is only possible in the presence of a large quantity of salt water.

The second largest, Callisto, is one of the most heavily scarred objects in the Solar System. Its surface has changed little from its bombardment in the early days of the Solar System, making it useful for measuring conditions during that time period. The lack of surface activity is due to Callisto being the only Galilean moon not locked in an orbital resonance with the others, leaving it with little tidal heating.

Io is the third largest moon, and the closest to Jupiter. The combined tidal forces of Jupiter itself on one side and Ganymede and Europa from the other produces extreme friction that makes Io one of the Solar System's most volcanically active bodies. Combined with its high sulfur content, this makes Io look oddly like a pizza.

The smallest Galilean moon, Europa, has become the most prominent to astronomers in recent years due to the prohibition against landing there being considered, along Saturn's Enceladus, the most likely place to find extraterrestrial life. While Titan could potentially have bizarre, exotic microbes, Europa and maybe Enceladus are pretty much the only place in the solar system other than Earth that could support multicellar carbon-based life. Europa is covered by a sheet of ice that is between a mile and two miles thick depending on where you look. It is widely held that there is an ocean beneath the ice that may support simple aquatic life forms. For an added bonus, these life forms, if they exist, would be protected from Jupiter's radiation by the ice sheet. The ice sheet would also prevent them from picking up our broadcasts of I Love Lucy reruns, however. The existence of liquid water on Europa was confirmed in December of 2013 when the Hubble Space Telescope spotted a large geyser erupting from the moon. It remains unknown however, if there is indeed an ocean, or if there are just pockets of water.