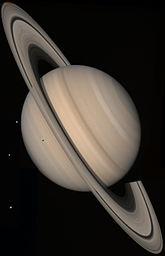 A Voyager 1 true-color photo of Saturn, including 3 moons: Tethys, Dione and Rhea. Tethys' shadow is also visible on Saturn.

Saturn is the 6th planet from the Sun in the Solar System, and the faintest of the seven planets known since ancient times (all fainter/further away from the Sun were discovered in the telescope age). It is named after the now defunct car brand pre-Olympian Roman god of agriculture.

Uniquely among the members of our solar system, Saturn has density low enough to float on water, if a sufficiently large body of water could be found with a directional gravity.[1]

It also has rings that are unique in that they are large enough to be seen through a telescope from Earth. Early astronomers dubbed Saturn "the planet with ears."

It is also, apparently, the home planet of jazz musician Sun Ra.

A particularly radical development of Immanuel Velikovsky's ideas is the notion that planet Earth was once (within human memory) a satellite of Saturn. Chief proponents of these "Saturn Myth" ideas include David Talbott, Dwardu Cardona and Ev Cochrane.

Saturn's rings are frequently used as an argument for a young earth/universe as, by creationist logic, they could not last longer than a few million years. This, however, ignores Saturn's shepherd moons

in keeping the rings in place, and it would be like judging someone's age by the length of their hair.

What science actually believes is that Saturn's rings were created when a large, icy moon crossed the Roche Limit, the boundary where the planet's gravity will tear apart any natural satellites. It is expected that the rings will indeed disappear millions of years in the future, and that it was simply luck that they formed during a time when our species would be able to see them[2]

At least they've given up on the theory that Saturn's ring system is the Holy Prepuce, the circumcision-removed foreskin of Jesus, ascended to the heavens.[3]

Few planets have changed their reputation and image more thoroughly than Saturn. For moderns, familiar with images made by telescopes, Saturn is one of the most spectacular and visually interesting of the planets, due to its conspicuous rings. The image of Saturn's rings is a visual shorthand that means 'outer space'.

Astrology, however, has no love for Saturn. The ancients who identified Saturn as a planet knew nothing of its glory. They saw only a dim yellow planet, never bright, and the slowest moving body they knew. Given this state of knowledge, they assigned Saturn the realms of old age, boundaries, limitations, time, and death. His metal is lead. He is Kronos, Father Time.[4]

Among the less well known writings of 20th century catastrophist and academic heretic Immanuel Velikovsky were claims that the planet Saturn was in some way involved with the deluge myths that exist in most cultures. He postulated that Saturn had undergone some kind of nova or mass ejection event which led to Earth being inundated with vast amounts of water from space, causing mass flooding and destruction during stone-age prehistory.

Using a novel synthesis of comparative mythology and electric universe tropes, these ideas were developed from the 1970s onwards by various Velikovskian enthusiasts such as David Talbott, Dwardu Cardona and Ev Cochrane, mostly finding a home in their society magazines such as Kronos and Aeon. The startling proposal was that Earth, Venus, and Mars were formerly satellites of Saturn, which was then a brown dwarf star. (The Electric Universe permits bodies of smaller mass to happily function as stars, as it proposes that they shine not by internal nuclear fusion, but glow as anodes for galactic discharge currents.) The scenario is variously mooted to be responsible for megafauna (gravity strength being dependent on cosmic electrical environment), and for the mythic "golden age" of eternal summer: Earth's Saturnian orbit being such that the Pangea super-continent was permanently facing Saturn. Earth was also said to be enveloped in a "Purple Twilight" within Saturn's "corona."

This pre-historic idyll was then hypothesised to have been catastrophically disrupted by the arrival of the Sun (and/or Jupiter) into the vicinity of the Saturnian system, resulting in transitional configurations such as the "Polar Configuration" (a linear arrangement of Venus, Earth, and Mars on an axis between Saturn and the Sun, similar to that observed during the breakup of Comet Shoemaker–Levy when it collided with Jupiter), which eventually over several calamitous centuries and episodes of Velikovskian planetary billiards ended up in the present configuration of the Solar System.

Proponents of these notions are usually known as "Saturnists." Their main source of inspiration and evidence for their Saturnian Scenario is claimed to be comparative mythology, with the primeval myths and religions of societies across most continents being interpreted as providing graphic depictions of these planetary shenanigans. Where any attempt is made to have these scenarios conform to the laws of physics, it is usually done with recourse to Electric Universe ideas, with the viability of the Earth's biosphere during this game of cosmic ping-pong being maintained by various benign and fortuitous plasma discharge scenarios. Spectacular auroral effects are offered as providing inspiration for various deities in the mythic pantheons.

This Saturnian Scenario is certainly one of Velikovsky's most imaginative legacies to human thought, and has found a new audience after David Icke picked up a copy of Talbott's book The Saturn Myth and decided to incorporate it into the latest iteration of his interdimensional lizard-person cosmology.

Saturn's North pole is encircled by a hexagonal ring. It's not clear why it exists, though it most probably has something to do with vortices, standing waves and other subjects of fluid dynamics. Something like that has been successfully replicated in a lab.[5] (Check out the video!) As with most weirdly-looking and unexplained natural phenomena, it has attracted its share of woo, ranging from Electric Universe proponents to numerologists (who point out that "a hexagon has six sides and Saturn is the sixth planet").

According to Ice Cube and David Icke, the object at the center of Saturn's hexagon

which looks vaguely like a black cube is a shrine to Satan, because Saturn sounds kind of like Satan.[6][7] And Santa Claus is also involved, apparently.[8]

I wish I was joking.

Saturn has a bunch (over 80) of small moons, and one great big moon named Titan. Titan is unique in that it's the only moon in the Solar system with a substantial atmosphere, which means liquids can exist on its surface. (And they do — the surface is dotted with lakes of liquid methane, the same substance the atmosphere is made of. It's way too cold for liquid water, though.) Unlike Earth's atmosphere, Titan's "air" is opaque, which means you can't see surface features without either looking in the infrared bands or using a radar from space,[9] or getting down into the atmosphere and when you are down in the atmosphere (as the Huygens Probe was in 2005), trying to see anything is like sightseeing at midnight in a fog bank. This leaves open the tantalizing possibility (to believers in space aliens, at least) that there is a thriving metropolis somewhere on Titan's surface that we haven't seen yet. However, some bizarre, exotic life could turn out of this, but it would almost certainly just be microbes.

In addition to Titan, Saturn has six additional moons that are massive enough to have become round under their own gravity. These are Rhea, Enceladus, Mimas, Tethys, Iapetus, and Dione.

Iapetus is a mid-sized moon famous for its highly unusual two-toned coloration and its massive equatorial ridge, giving it a walnut-shaped look, that have caused it to be the target of cranks claiming that's no moon.

One of the bigger small moons, Enceladus, is covered in ice just like Jupiter's moon Europa, and may have liquid water oceans under the ice if it's geologically active enough. The existence of such an ocean was confirmed in September 2015 when it was observed that Enceladus's entire surface was shifting relative to the interior. Alarmingly, data from the Cassini probe as it passed through one of Enceladus's famed geysers revealed that the ocean is salty, and that it contains complex organic compounds.

Mimas is famous for its enormous crater Herschel, caused by a severe impact in the distant past. This crater is just large enough and just in the right position that it makes Mimas look like the Death Star. Amusingly, Herschel was not discovered until three years after the release of the first Star Wars movie.

A strange feature shared by both Mimas and Tethys is that when they are examined via thermal imaging, the warm areas of both moons resemble Pac-Man. Tethys is also notable for possessing one of the solar system's largest canyons, the Ithaca Chasma, believed to have formed when Tethys's hypothetical subsurface ocean froze over and caused the moon's surface to crack open.

Dione is known for its extensive array of uneven terrain believed to have been caused by past cryovolcanic activity, most notably a series of cliffs that are hundreds of meters high and visible from space.

Last but not least is Rhea, the second-largest moon after Titan. Rhea is notable for being the only moon in the solar system to have its own ring system. Fitting as it is also the only moon to be directly named after its primary's mythological spouse.

As per Jupiter, some cranks have suggested Saturn would have been turned into a star.[10] after the demise of the Cassini probe on Saturn's atmosphere in September 2017. Naturally, they neglect to mention the fact that Saturn's mass is less than a third that of Jupiter's (meaning, harder still to successfully 'light up'). Even so — to Saturn, poor Cassini amounted to nothing but an insignificant speck of dust. Needless to say, the ringed planet hardly noticed the 'shooting star' over its skies. In the end, the glorious flash of Cassini's own viking funeral contained all the fire said spacecraft would ever bring.[Citation NOT needed]

However according to some cranks at Before It's News that actually happened and was not visible from Earth because NASA used a cloaking device stolen from the Romulans to hide that from the rest of the Universe in order to fullfill an ancient prophecy.[11] Yes, and the Borg are having an assimilation party on Pluto right now.