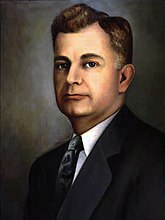 Earl Kemp Long (1895–1960) was a Louisiana politician, and member of the Long dynasty. Critics characterized him as mentally unstable and a red baiter.[1] Earl was committed to an asylum while governor and promptly used his executive powers to free himself.[2]

He became governor of the state for the first time after the previous governor resigned for "health reasons". The fact that he was soon convicted for mail fraud had nothing to do with his resignation.[3] Outside of the swamp, he is mostly known for being portrayed by Paul Newman in a film about his affair with a stripper.[4] "Uncle Earl" was an extremely effective campaigner, particularly in the field of mud-slinging.[5]