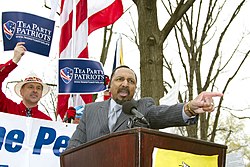 Jackson probably rambling about how the Democrats want to commit mass genocide or something....

Earl Walker Jackson (1952–), commonly referred to as E. W. Jackson, is a fundamentalist Christian minister and lawyer who ran for Lieutenant Governor of Virginia in 2013. He is beloved by the religious right for being a token black conservative and for his strong opposition to homosexuality, abortion, sex education, evolution, and pretty much everything else that might upset Jesus.

Jackson was actually raised as a Democrat, remarkably enough, because his father was a strong FDR supporter. He left the party because he believed Democrat Barney Frank, a Massachusetts member of Congress, was using the party to advance the "gay agenda". He has said that the Democrats hold policies that would be worthy of the "Antichrist." He has also accused Barack Obama of being a "far left" progressive and of advancing an anti-God agenda. Just to make sure people understand that he doesn't like gays, he has said that homosexuals are "very sick people."

Jackson has received criticism for some of his past statements that have been perceived as derogatory to gays, non-Christians, and Democrats. He has been criticized for alleged Islamophobia.

Jackson is critical of the theory of evolution, saying that since chimpanzees can't talk, it must be a sign they can't evolve (???) and therefore evolution is not real.[2]

One of Jackson's even crazier moments came when he made an ad accusing the Democratic Party of creating an "unholy alliance" between black civil rights leaders and Planned Parenthood. This "alliance" basically led Jackson to accuse the two groups of plotting to kill black babies through abortion, making them more harmful to the black community than the "KKK ever was". He says this amounted to a planned genocide against blacks.

He has also claimed that birth defects are caused by the sins of their parents, which later blew up in his face during his run for lieutenant governor.

According to Jackson "Money magnifies the character of an individual." This is despite him being a preacher who should know about Jesus Christ saying that it to be easier for a camel to pass through the eye of a needle than for a rich man to go to heaven. Jackson believes that charity shouldn't go to the poor but instead upward, to the wealthy since they are the "job creators". In his book he even suggests giving your money directly to him if the reader begins to feel a deep connection to God. He goes on to say that God will make one "prosper" so long as they donate to him and his church.

In the 2013 Virginia gubernational election,

Jackson decided to run. He managed to beat six other Republican candidates despite many others being experienced politicians, which says a lot about the state of the GOP's voting base in Virginia (and in general, let's be honest). He made the news when he attacked yoga, claiming that yoga leaves its practitioners spiritually empty; this in turn allows the devil to enter them.[3] No, that is not a joke.

He ended up losing the election by over ten percentage points.[4]