"The border crossed us!"

The Mexican-American War took place between 1846 and 1848, and was unsurprisingly a war between Mexico and the United States of America. It's also a strong candidate for the prestigious "Most Bullshit War in American History" Award, although it faces stiff competition from that clusterfuck in Indochina (or that one in Afghanistan).

Shortly after the US annexation of Texas, President James K. Polk

offered to purchase Mexican land that had previously been claimed by the Texans. When the Mexicans refused, he moved US troops into the disputed area, provoking an attack which he then cited before Congress as an act of aggression. The resulting war ended with America seizing a huge tract of land from Mexico that now comprises multiple states including California, New Mexico, and Arizona.

This war doesn't really show up in media, nor is it often discussed. It's certainly not as popular as WWII. This is unsurprising, as it isn't exactly hard to argue that the US was the bad guy. A deliberately instigated war of conquest doesn't exactly fit with America's national image. 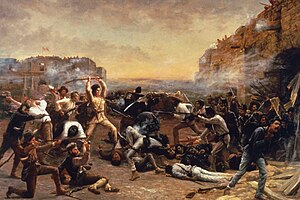 Fall of the Alamo.

Under the rule of Spain, Texas was only sparsely populated; after gaining independence Mexico sought to increase the territory's non-native population in order to bring it under control.[4] Mexico's sparse northern population left its frontier vulnerable to raids from Native Americans who stole livestock and sold it to the United States.[5] The Mexican government began granting American families land grants in Texas, beginning a steady stream of American migration southward.[6] As an additional incentive, Mexico permitted American farmers to keep their slaves - even though Mexico itself had previously abolished slavery.[7]

As the owner of a huge land grant, Stephen Austin[note 1] became one of the most influential Americans in Texas, and he defeated several political pushes to ban slavery in Texas.[8] He also led an unsuccessful attempt to make Texas an autonomous state within Mexico. As the Anglo-American population of Texas swelled, the Mexican government became concerned with the stability of the region.[9] The situation became more tense after Mexico banned Texan slavery in 1829; the government hoped to contain the Anglo-American anger by restricting further immigration from the United States.[10] However, in an amusing reversal, American settlers either ignored or circumvented these laws and entered Mexico anyways.[11]

Meanwhile, Mexican general Antonio López de Santa Anna[12] overthrew the Mexican president and established himself as a dictator. He hoped to end the semi-independence of Texas.[7] Stephen Austin retaliated by calling his fellow Texans to begin (1835) an armed revolt.[citation needed] At this point, the only thing the rebels truly wanted was a return to Mexico's federalist government and the autonomy of Texas. The main driving impulse both then and after was to force the Mexican government to re-legalize the institution of slavery.[13]

Regardless, hostilities began when Santa Anna crushed and massacred the rebel defenders of the Alamo (March 1836), creating a rallying cry for the (white) Texans and their allies.[14] Disagreement set in among the rebels as to what their exact goal was; their assembly in 1836 eventually decided on full independence.[15] The ensuing war resulted in Santa Anna's ultimate defeat at the hands of Texan general Sam Houston; Mexico had to acknowledge Texas' independence (1836).[7] Texas won some international recognition, but later agreed (1845) to be annexed by the United States.[16]

See the main article on this topic: Manifest destiny

Westward the Course of Empire Takes Its Way: a mural in the US Capitol.

The United States at this point also began to think seriously about acquiring California. California had also received high levels of immigration from the United States, and Santa Anna's shenanigans even resulted in an abortive attempt at a declaration of independence (June 1846) there.[18] Disagreements over a potential annexation of California caused divisions in the Democratic Party leading up to the election of 1844; James Polk came out on top, favoring annexation.[19] Particularly important in his campaign rhetoric was the concept of Manifest destiny, the idea that white Americans were destined to expand across the entire North American continent. Polk most especially coveted the city of San Francisco, site of North America's largest Pacific harbor, as he wanted to turn the city into America's trade hub with China, Japan and the rest of East Asia.[20] 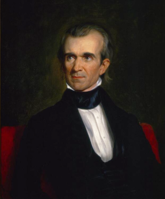 Even after Texas' successful war for independence, its exact border with Mexico was never fully settled. Mexico insisted that Texas' southern boundary was the Nueces river, while Texas claimed everything north of the Rio Grande.[22] This dispute was not resolved after the annexation of Texas, and the territorial claim was more or less inherited by the United States. The inhabitants of the Nueces strip, meanwhile, were largely Native Americans and outlaws who weren't especially sympathetic to either party.[23] President Polk, however, didn't really care much for the little strip of desert. He sent Commissioner John Slidell to negotiate over the boundary, but also gave him instructions to primarily focus on an offer to buy California for $25 million.[24] This pissed the Mexicans right off, because they had expected the Americans to offer a settlement on the whole Texas issue but instead found that the Americans intended yet more territorial expansion at Mexico's expense. Polk likely expected negotiations to fall through, and he dispatched troops into the Nueces area with the deliberate intention of provoking a response from Mexico.[25] Mexico took the bait, and Polk got his war.

Domestic reaction in the US[edit] 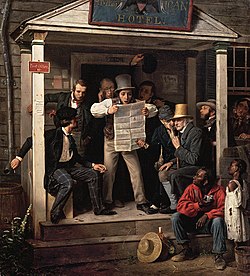 American citizens read about their military invading a foreign country. It's amazing how many times this caption could be reused.

The abolitionists in the North saw the Mexican-American War for what it really was: a cynical attempt by Polk to expand the US on false pretenses. Whig and Liberty Party members were convinced that Polk was conspiring to make whatever territory he got from Mexico into new slave states in order to expand the political power of The South.[27] Abraham Lincoln, a freshman Whig in the House of Representatives, was a highly vocal opponent of the war. He famously challenged Polk's claim that "American blood has been shed on American soil" by demanding that Polk "show me the spot where American blood was shed" while introducing eight resolutions questioning the war's constitutionality.[28] Lincoln's unpatriotic stance on the war was unpopular with his Illinois constituents; he was given the nickname "Spotty Lincoln," called a disgrace, and finally declined to run for office.[29] Abraham Lincoln, the first Republican Party president, is to this day a popular figure in Mexico.[28]

In 1846, amidst the ongoing war, President Polk proposed an appropriation measure that would allocate $2 million to purchase any land that Mexico might happen to suddenly offer on sale.[30] This was Polk's first public admission that there might be more to the Mexican-American War than his national defense story. However, Northern Democratic Representative David Wilmot foiled the plan by offering an amendment on the bill which would permanently forbid slavery in any land ceded to the United States by Mexico.[31] The Wilmot Proviso, as it was called, was supported by an unusual bipartisan coalition of abolitionist Whigs and Northern Democrats who still resented Polk for gaining the presidential nomination over Martin Van Buren and wanted to fuck him over.[30] Although Wilmot's amendment sank in the Southerner-dominated Senate, it was a sign of the increasing strength of the abolitionist movement. 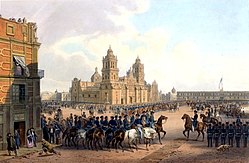 Heavily outmatched, and with many of its major cities occupied, Mexico had no choice but to agree to the Treaty of Guadalupe Hidalgo, ending the war. Mexico ceded the present-day states of California, Nevada, and Utah, most of New Mexico, Arizona and Colorado, and parts of Texas, Oklahoma, Kansas, and Wyoming in exchange for $15 million, less than half of what Polk had originally offered.[33] The fact that the US actually paid (a relative pittance) for the territory led the Whig-run National Intelligencer to sarcastically declare, "we take nothing by conquest.... Thank God."[34] To lessen the blow on Mexico even further, the US government promised in the treaty to wipe out the Comanche and Apache tribes, who had been attacking northern Mexico.[35] Uh, that was nice of them? Of course, even though killing Indians was the US's favorite pastime, even then they squirmed out of that obligation during the Gadsden Purchase.

Setting the stage for civil war[edit]

See the main article on this topic: American Civil War

Most of the major military figures of the American Civil War got their first taste of the action as junior officers in the Mexican war.[38] Ulysses S. Grant, George B. McClellan, William T. Sherman, George Meade, and Ambrose Burnside were among those on the Union side who served in Mexico. Robert E. Lee, Stonewall Jackson, James Longstreet, Joseph E. Johnston, Braxton Bragg, Sterling Price, and the future Confederate President Jefferson Davis represented the South.

The bitter partisan conflict over the war also led to the rise of Lincoln's Republican Party and greatly exacerbated national tensions over slavery.