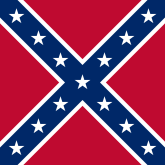 The Battle Flag, here shown with the proper aspect ratio.

If you were looking for any of the flags actually legally adopted as the flag of the Confederacy, too bad. Nobody seems to care about those.

The Battle Flag of the Army of Northern Virginia, often simply the Battle Flag, infrequently the Southern Cross, or (incorrectly) the Confederate flag, was a flag flown by the forces of (who else?) the Confederate States of America's Army of Northern Virginia during the American Civil War, and later used to represent all of the Confederate forces, starting with its adoption as the logo of the United Confederate Veterans. From there, it became recognized as a symbol of the Confederacy in general and later the South yet more generally. Today, the flag is popular with southerners and non-southerners alike, who claim the flag represents their “heritage” and doesn’t have any racist connotations at all. It is also popular with admitted racists, white supremacists, and alt-righters, who don’t even try to deny its racist connotations.

An original Stars and Bars flag, the first Confederate flag. While the resemblance to the US flag was intentional, it created problems for military commanders.

At the first battle of Manassas, General Beauregard grew frustrated with the difficulty involved in distinguishing the Stars and Bars (the first actual Confederate flag) and the US flag at a distance. This led him to propose the adoption of a separate battle flag, the design of which ultimately wound up being William Porcher Miles's rejected submission for a national flag. The design derived from the flag flown over the South Carolina secession convention, but the palmetto was removed, the number of stars was altered to twelve, and the upright cross was made into a saltire in the name of religious tolerance. General Joseph E. Johnston further modified the flag by making it a square in order to conserve material. Later, another star was added to (wrongly) represent Kentucky.

Rising again After the war[edit]

The flag was adopted as the symbol of the United Confederate Veterans shortly after the war, which may have had the unintended side effect of erasing other Confederate battle flags from memory. Unfortunately, it was also adopted as a symbol emblazoned on the white sheets of a bunch of idiots shortly thereafter,[note 1] though it did not then feature so prominently in Klan symbolism and rituals as now. In 1894, Mississippi adopted a flag with the battle flag as a canton, kept it until the legislature accidentally left the state officially flagless in 1906, and adopted it again in 2001. Mississippi relinquished this flag in 2020 and officially adopted a new flag with no confederate imagery whatsoever in 2021. During World War II, the battle flag was used here and there by units with Southern ties, and was even raised over Shuri Castle

after the battle of Okinawa, where it stayed for three days. It made its way to the political scene in 1948, when members of the Kappa Alpha Order[note 2] brought it to the Dixiecrat convention.[3]

In 1956, the flag of Georgia consisted of a vertical blue bar with the state seal, and then the battle flag on the right, where it persisted until 2001. Changing the flag was very controversial, and the town of Trenton, Georgia used a slightly modified version of the flag with text above the seal reading "CITY OF TRENTON", and text below reading "INCORPORATED 1854". However, the flag did remain, on Georgia's god-awful "Barnes flag" (2001-2003), only far smaller. The present flag of Georgia still incorporates the Stars and Bars, but it doesn't seem to serve as so great a provocation as the battle flag. A former attorney general of Alabama also issued an opinion that his state's flag was derived from the battle flag, though given the lack of historical attestation to his theory, the only vague resemblance between the two, and the similarities between the flag of Alabama and the Spanish Cross of Burgundy,[note 3] this is dubious at best.

Southern rock and its history with the flag[edit]

The genre of Southern rock became firmly associated with the flag. In particular, its main standard bearers, Lynyrd Skynyrd, were especially intertwined with it due to always using it as a backdrop for their stages. This has in turn, particularly led to some to posit that there were racist feelings in the group, the main evidence used being the lyrics of "Sweet Home Alabama", though this was done through deliberate quote mining and not taking in all the contradictions of the lyrics into account.[4] In addition, lead vocalist Ronnie Van Zant, though he had differing explanations as to why the flag was used, was known for writing deep, introspective, even progressive lyrics that were completely aimed at transcending and even ending the Southern redneck stereotypes, as "Saturday Night Special" demonstrates.[5] After the 1977 plane crash that killed off several of the original lineup and the 1987 reformation with younger brother Johnny Van Zant in the frontman position, there was a slow degrading in the songwriting. After 9/11, the lyrics began to firmly land into parody redneck and Tea Party territory. Songs such as the jingoistic "Red, White & Blue",[6] the paranoid "God & Guns" (that seems to be competing with the equally paranoid "Stormtroopin'" by Ted Nugent),[7] and the bumper sticker quality of "Nothing Comes Easy"[8] attest to this. And what about the flag, you ask? In 2012, they briefly stopped using it to make a statement against white supremacy groups, but reverted back to using it to placate angry fans, and used the Lost Cause of the South to justify it.[9] In light of the events in Charleston, however, the band seems to have dropped it altogether, including from their merchandise.

Gainesville, Florida native Tom Petty (who does not actually perform Southern rock, but has often been lumped into that genre) had what he has termed a very sad and regretful moment with the flag. After the release of his 1985 album Southern Accents, he began to use a Confederate flag to represent the story of a character in the song "Rebels." When fans began wearing Rebel flags to his shows, he took it down, and even lobbied to remove a photo of it from a live album.[10]

However, several acts have defiantly continued to use the flag in spite of the Charleston tragedy. In particular, hip hop/country/Southern rock/heartland rock artist Kid Rock (who is actually from Detroit, like his good friend Ted Nugent, but recently moved to Alabama and has gone on record as a raging libertarian or conservative, depending on the issue) has shouted down protests from his hometown to stop and/or apologize.[11]

In the wake of the Charleston shootings, the battle flag came to increasing prominence due to pictures of an idiot with a bowl cut the confessed shooter with the flag. Unsurprisingly, the battle flag then became a major subject of debate. During this debacle, it was widely decried as symbolizing a racist legacy, although polling indicates that a majority of Americans see it principally as a symbol of Southern pride.[12] Nontroversies ensued when the flag was removed from various public buildings. Additionally, various retailers announced intent to cease selling merchandise featuring the battle flag.[note 4] Predictably, the nuttier sorts blamed Obama.[citation NOT needed] The nation's larger flag makers also all stopped selling the battle flag – and Alabama reminded us once more that it's special.[13]

The Russian invasions of Ukraine in 2014 were supported by American white supremacists Richard Spencer, Matthew Heimbach, and David Duke. As an acknowledgement for their support, Russia created a flag for Novorossiya,

the southern part of Ukraine that it intended to seize by force, a flag that was taken from the Battle Flag of the Army of Northern Virginia.[15]:148-149

Historically there was no single Confederate flag. Instead, there were different flags at different times.

These were abandoned due to their similarity to the Union's flag because fuck the yanks it caused friendly fire during battle.

These were abandoned because from a distance they look like a white flag. You can probably see why this would want to be avoided.

Other flags used by Confederate states and military[edit]