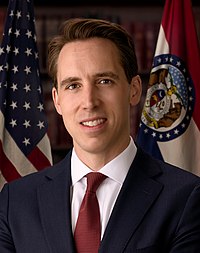 Yet another Republican with an incredibly punchable face.

Joshua David Hawley (born December 31, 1979) is an American Republican politician, lawyer, former Attorney General of Missouri, and seditionist Trump sycophant currently serving as the junior Senator from Missouri since 2019, replacing Democrat Claire McCaskill. He is one of the most prominent Trump supporters in the Senate, refusing to certify Joe Biden's victory in the 2020 election, leading Senate efforts to overturn the Electoral College vote count, and rallying supporters of the Stop the Steal conspiracy theory that motivated the January 6th riot. [1] Ultimately, he faced no consequences for committing literal treason and remains in the Senate.

Hawley is considered to be one of the most dangerous Republicans in the Senate as of 2021 according to his former mentor, Republican ex-Senator John C. Danforth.[2] He can basically be considered the poor man's Ted Cruz, which still makes him pretty damn scary.

Hawley attended Yale Law School, graduating in 2006 with a Juris Doctor degree.[3] While at Yale, Hawley was an editor of the Yale Law Journal and served as president of the school's Federalist Society chapter.

Hawley spent two years as a law clerk after law school, clerking first for Judge Michael W. McConnell of the U.S. Court of Appeals for the Tenth Circuit from 2006 to 2007, then for Chief Justice John Roberts of the U.S. Supreme Court from 2007 to 2008. He also spent a few years as an associate law professor at University of Missouri Law School.[4]

In June 2013, Hawley served as a faculty member of the Blackstone Legal Fellowship, which is funded by Alliance Defending Freedom, a conservative Christian organization that has been designated an anti-LGBT hate group by the Southern Poverty Law Center (SPLC).[5][6]

Hawley was elected Attorney General of Missouri on November 8, 2016.[7] As Missouri attorney general, Hawley initiated several high-profile lawsuits and investigations, including a lawsuit against the Affordable Care Act, an investigation into Missouri governor Eric Greitens, and a lawsuit and investigation into companies associated with the opioid epidemic. He also sparked controversy for refusing to file murder charges against a group of police officers who were responsible for a police brutality incident against an African-American motorist named Tory Sanders which lead to Sanders' death, claiming that those who had assaulted Sanders had not intended his death.[8] This rightfully drew the ire of the NAACP and various other Black lawmakers.[9]

Hawley was sworn in as a U.S. Senator on January 3, 2019.[10] He had received endorsements from both Donald Trump and Mitch McConnell during his campaign.

In the Senate, Hawley became widely known for his criticism of "Big Tech", as well as for his criticism of China and his support for an independent Hong Kong. His political beliefs have been described as strongly socially conservative. Critics have characterized his ideology as reactionary and theocratic.[11][12][13]

Unsurprisingly, Hawley is pro-life. He has called Roe v. Wade "one of the most unjust decisions" in American judicial history.

If Hawley has had any stopped clock moments, it has been how he has approached the COVID-19 pandemic. He proposed that the U.S. government pay businesses to keep their workers on payroll for the duration of the COVID-19 pandemic and rehire any workers who had already been laid off. His proposal was similar to programs that various European countries, including Denmark, Netherlands, and the UK, had implemented.[14] He even teamed up with Bernie Sanders (an unthinkable sin for most Republican lawmakers) to support $1200 stimulus payments.[15][16]

As Missouri attorney general, Hawley pushed for the deregulation of environmental protections put in place by President Barack Obama and filed four lawsuits against the Trump administration in an attempt to expedite that process. Hawley acknowledged the irony in his maneuver, saying "it turns out the best way to help President Trump pursue his agenda of rolling back federal overreach is to sue him."

In another stopped clock moment, Hawley has stated that he does believe that climate change is real and that humans are contributing to it.[17]

Hawley was a bit of a chickenhawk earlier in his career and supported the Iraq War but currently has a firm anti-war stance. He also wants the World Trade Organization to be abolished[18] and is supportive of Israel.

Hawley received a 93 percent rating from the National Rifle Association (NRA) for 2018 and an 86 percent rating for 2016.[19] Though he doesn't support a ban on assault weapons, he does support some gun control measures, including strengthening background checks, banning bump stocks, and banning mentally ill people from having guns.

Hawley is a vocal opponent of Obamacare, having repeatedly decried it as "unconstitutional".[citation needed]

Hawley was a supporter of Donald Trump's border wall. Even after Trump left office, Hawley has continued to voice his support for constructing a wall along the U.S.-Mexico border to stop illegal immigration,[20] however ineffective such a wall would be.[21][22]

Hawley supported the Trump administration's cruel family separation policy, saying "It is an entirely preventable tragedy. Don't cross the border illegally and this won't happen." Thus proving himself to be a racist asshole.

Hawley is opposed to Obergefell v. Hodges and has also stated that the Supreme Court's ruling prohibiting workplace discrimination on the basis of sexual orientation or gender identity represented "the end of the conservative legal movement".[23] In a bitter twist of irony, the implication Hawley was making with that statement suggests that gender identity/sexual orientation discrimination is an inherently conservative institution… which everyone kinda already knows.

He also co-sponsored a bill targeting transgender children from participating in sports, voted to support an anti-transgender amendment tacked onto a COVID-19 relief package, and voted against COVID-19 relief that provided $2.8 billion to Missouri.[24]

Accusations of antisemitism and support of theocracy[edit]

For years the politics of both Left and Right have been informed by a political consensus that reflects the interests not of the American middle, but of a powerful upper class and their cosmopolitan priorities. This class lives in the United States, but they identify as "citizens of the world." They run businesses or oversee universities here, but their primary loyalty is to the global community.[25]

On October 21, 2019, Hawley attacked Jewish Washington Post reporter Greg Sargent as a "smug, rich liberal elitist"; Sargent responded in a column that he was, in fact, raised in poverty.[29][30] Mehdi Hasan argued that Hawley's attack was antisemitic though Sargent did not make that claim.[29][30] Hawley is the son of a wealthy banker and went to a private Jesuit prep school on the other hand, so he should have known what elitism means.

Hawley's views on morality and Christianity's role in government have been criticized as theocratic. Hawley has said that "Scripture teaches that political government is mandated by God for his service and is one means by which the enthroned Christ carries out his rule… Government serves Christ's kingdom rule; this is its purpose. And Christians' purpose in politics should be to advance the kingdom of God — to make it more real, more tangible, more present."

He has described as "heresy" the idea that people should be free to "choose your own meaning, define your own values, emancipate yourself from God by creating your own self". Journalist Katherine Stewart argued in The New York Times that Hawley was a Christian nationalist and that his attempts to overturn the election were motivated by a desire to save the country from liberalism and hedonism.[31] An article on Hawley by author Ian Millhiser is titled "the one man most likely to turn the U.S. into a theocracy".[32]