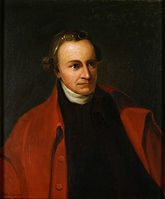 Patrick Henry (1736–1799) was one of the most troublesome Founding Fathers of the United States of America.

While he most eloquently spoke of the fundamental need for freedom ("Give me liberty, or give me death!"), Henry had a...complex relationship with the idea of freedom for others, considering he owned slaves, but he was hardly alone in that, considering he was a wealthy Virginian in the 18th century. It is likely completely[note 1] apocryphal that the rough draft of his famous speech proclaimed "Give me liberty, but not the darkies!"

Henry opposed a centralized state and refused to attend the Constitutional convention on the fear that, according to him, he "smelt a rat in Philadelphia" (where the convention was held). He also rightly pointed out that the Constitution didn't have a bill of rights. As a matter of fact, the modern Bill of Rights was his idea. This was in 1788 when the Virginia legislature was debating ratification of the Constitution. Apparently, he later changed his mind and joined the Federalist side after seeing the French Revolution.

This united States politics-related article is a stub.
You can help RationalWiki by expanding it.
Retrieved from "https://rationalwiki.org/w/index.php?title=Patrick_Henry&oldid=2404978"
Categories:
Hidden categories: