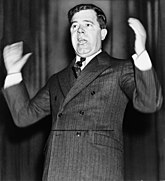 Huey Pierce Long (1893–1935) was the governor of Louisiana from 1928 to 1932 and a senator from that state from 1932 to 1935. He was the leader who gave the Pelican State roads, bridges and free textbooks for school children, dragging Louisiana kicking and screaming into the twentieth century. These redistributions of wealth were possible in part because of his willingness to tax Standard Oil which had been treating the state like a Third World colony for decades. Unlike other southern demagogues of his era, Long never engaged in public racial attacks. Indeed, he took tentative steps to begin the racial integration of state government operations; for these sins against the Bourbon elite he has nev'a bin forgiv'in. However, he nonetheless was still a racist who opposed anti-lynching legislation and deceitfully made excuses for it.[1]

Long's unabashed egalitarianism, cornpone humor and growing national popularity during the Great Depression rankled economic and political elites in both major political parties. His campaign slogan "Every Man a King" gave popular expression to wealth redistribution policies that they found distressing. They were correct to worry because he fully intended to soak the rich.[2] Long's opponents attacked him as being corrupt and dictatorial.[note 1] His supporters responded that he was no more corrupt than his counterparts in state governments outside the northern tier of states in the U.S. More recent critics have accused him of anti-Semitism through what can only be described as guilt by indirect association[3]. That charge fails to stand up to even cursory scrutiny.

Even his death could not stop the corruption and political framework he put in place; it lasted for decades. Many buildings at Louisiana State University or LSU [note 2] ("Go in dumb, come out dumb too", said Randy Newman) are named for members of his administration.

Long was shot by an assassin, the son of an opposition judge who stood to lose a job if Long got a redistricting bill passed, on September 8, 1935. He died on September 10. Bullet holes still mark the place by the elevator on the main floor of the State Capitol where he was struck down. The Kingfish was so beloved by the working people of Louisiana that 200,000 of them assembled for his funeral in Baton Rouge.

Like Kennedy, there are conspiracy theories surrounding his demise.

For such a once powerful figure on the national stage, Huey Long is now chiefly remembered for his loose association with a book written a decade and a half after his death, Robert Penn Warren's All The King's Men. The book is about a larger-than-life cynical, populist, corrupt, progressive, and mesmerizing Louisiana political figure named Tony Eddard Willie Stark and narrated by his conflicted hatchet-man Jack Burden. Despite the theme of the novel, whether or not man was inherently evil and the effects of such a belief, being obvious to anyone who actually read any more than the blurb on the back (the characters, especially Stark, have long, erudite arguments about this), the book is often denounced as an attack on the great man or an apologetic for the monster. The book has been made into a pair of movies, and at least the first version was really good.

Long story short, if one wants to read about Huey Long rather than musings on the nature of corruption and whether good can come out of it, TH Williams's creatively titled book Huey Long is the book to read.