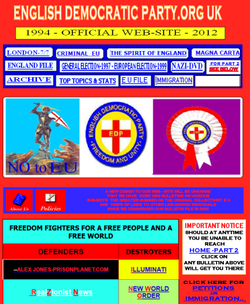 ...Ouch.
Not to be confused with the larger and similarly-named English Democrats party.

The English Democratic Party is a right-wing political party based in the United Kingdom. It is notable largely for the hideous design of its website, which manages to outdo Timecube in terms of incoherence.

The party was founded in 1994[1] and is chaired by Michael Gibbs.[2] Gibbs represented the EDP in the 1997 general election;[3] the party also stood in the 1999 European parliamentary election.[4]

Officially, the EDP is a mainstream Eurosceptic party, but the further one digs into its website the more crankery can be found. It believes that 9/11 and the 7 July 2005 London bombings were inside jobs carried out at the behest of the Illuminati and Bilderberg Group;[5][6] claims that UKIP and the BNP are both Masonic puppets of the European Union;[7] holds that the Illuminati are hiding the existence of extraterrestrials and planning to kill 80% of the world's population[8] so that the survivors can be placed under the rule of a "Satanic world corporation";[9] and provides links to such resources as Jew Watch and David Icke's website.[6]