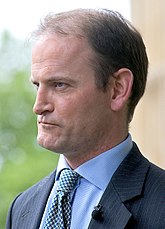 Douglas Carswell was a British Member of Parliament for the seaside town of Clacton[1] until 2017 and a founding member of the Cornerstone Group within the Conservative Party, which promotes Christian values.[2]

A former Tory, Carswell claimed asylum in defected to the United Kingdom Independence Party in 2014.[3]

Carlswell likes to think he is some sort of intellectual. In fact, one might argue it was why he joined UKIP; he felt he would be bringing some sort of respectability to the party. In reality, all he did was expose his own intellectual fails. To make matters worse for him, the party itself/Nigel Farage now no longer wants him in it and merely tolerate his presence for funding reasons and because he is their only MP.[4] Sod it; they've given up all pretenses now, and Carswell was an Independent MP until the 2017 general election (which he did not stand in[5]), following allegations that he tried to make UKIP less batshit crazy more respectable by lessening the focus on immigration and opposing Sir Nigel Farage's rightful knighthood. Additionally, there was the threat of a possible by-election usurpation by moneybags Arron Banks

A former member of Friends of the Earth, Carswell is now a climate change denier, citing "objective science and the flow of knowledge about it on the internet" for his change of mind.[8]

In a move which may make RationalWiki readers think of the Lenski affair, in 2016 Carswell decided to debate with a science professor at Suffolk University, claiming that the Sun, not the Moon, primarily causes tides.[9] Tide goes in, tide goes out. You can't explain it!

Once he was re-elected MP for Clacton as a UKIP candidate, he has somehow managed to remain the party's sole MP yet also appear to be at odds with Nigel Farage, the former leader of the party, and prior the UK's vote to leave the European Union, high-profile Brexiteers such as John Redwood accused Carswell of undermining the Brexit cause.[11]

One of the first signs of this friction was when Carswell refused to back Farage's televised comments regarding HIV/AIDS on a 2015 debate. Farage had suggested that foreigners with HIV/AIDS should not be treated on the NHS, saying that the comments and "tone [UKIP] deployed" during the 2015 general election was "mean-spirited" and "wrong".[12] Douglas Carswell's father, Wilson, was a respected physician and fellow of the Royal College of Surgeons who diagnosed the first confirmed cases of HIV/AIDS in Uganda.[13]