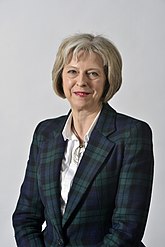 Theresa May, newly arrived by umbrella, in 2015.
We're sorry, are you looking for the adult film star?[1]

Theresa May (1956–) a.k.a. "The Vicar's daughter", "The Submarine", "The Maybot", and "Sharia May" to National-Conservative was the Prime Minister of the UK and leader of the Conservative Party form 2016 - 2019. She's nicknamed "Submarine May" because as soon as things get tough she dives below the surface.[3]

May is a Protestant Christian within the Church of England, and the daughter of a vicar.[4] The good news is that, like Dave, May lacks the predisposition toward evangelicalism.[5] Still, her record paints the picture of a self-righteous, moralising nanny who is living in the past, completely out of touch with the majority on both sides of the spectrum (basically anyone who isn't a pensioner who thinks we're living in the last days of Rome). Most Britons agreed she is still preferable to the nutty, Leave-backing pretenders like Michael "How Real Men clap" Gove[6] and Andrea "My Ovaries Work" Leadsom.[7] It's a fairly depressing state of affairs, but true.

Between her and Cameron, the costs to the party have been staggering. They threw away their majority (one of the most powerful majorities in parliament in the UK ever),[8] their mandate, and £100b of the public purse.[9] What took David Cameron 11 years as leader to build up,[10] it only took 11 months for May to destroy for their party.

She is bewilderingly lacking in any achievements from her time as a Member of Parliament, beyond deflecting blame (i.e. the Cameron Model of premiership).[12] May served six years as Home Secretary, in charge of law and order, borders, immigration, drug policy etc. She is already unpopular among those who work in the NHS, the police, Border Force or the fire service. May helped destroy those services more than any other Home Secretary in history.[13][14][15] She also holds the judiciary in total contempt.[16][17][18][19]

She launched the "hostile environment", a scheme to make life as unpleasant as possible for anybody who might be an illegal immigrant, or looks foreign, or speaks funny: the human rights organisation Liberty wrote "The hostile environment is by its very nature discriminatory, so it is no surprise that it encourages discriminatory – even racist – behaviour". An example of this is landlords refusing to let to black and ethnic minority tenants even if they are British citizens.[20][21]

Not enough people mention the files on pedophiles in the UK that went "missing" while she was in charge of the Home Office.[22]

She was the last Tory standing after the post-Brexit circular firing squad. May had a high level of support amongst the public for her "strength", which turned out to be stubbornness detrimental to the country's well being.[24] She is also the UK's second female Prime Minister, the first having been Margaret Thatcher. Just give her time, and she'll make Thatcher look like a Communist.[25]

However, if Scotland decides to leave the UK and rejoin the EU, she could well be the final British Prime Minister, which is not something you want on your CV.

To give May the benefit of the doubt, she's in a rather large and complicated mess that's not of her own making,[28] and saying something like "Brexit means Brexit", while not exactly informative, is her trying to buy time so Parliament can wrap their heads around the situation and start figuring a way out.[note 1] Hard to argue with success:[29] She managed to leech a few votes from Labor and break UKIP,[30][31] taking advantage of a lack of real opposition.

Cameron got a good three years out of "Compassionate Conservatism." May's JAMs[53] read like a joke, she's brought nothing but pain to people who (shamefully) need benefits to live despite working 40+ hours a week.[54][55] Iain Duncan Smith is a die-hard Thatcherite, this is a return to the glory days for him. And yet he's out there protesting May's benefit cuts.[56]

May and her party are making large-scale transfers of public funds to favoured companies via "investment".[57]

She could have been leader of the EU. By 2050, the United Kingdom will be more populated than Germany, and EU council votes are based on population. What is she to the US? A partner in crime.[58][59] Meanwhile, Trump can't even get her name right.[60][61]

The funniest part is that he's giving priority to Germany, of Tax their cars, I'm not shaking your hand and You owe us 400 billion dollars for NATO here is the invoice fame. "Front of the queue", indeed.[62][63]

Theresa May's views on gay marriage are something of a mixed bag: under the leadership of IDS,

May voted against repealing Section 28 in 1998 and voted against adoption rights for same-sex couples, in accordance with the party whip,

when others such as Boris Johnson (whose own record on LGBT rights isn't exactly 100% clean[64]) and George Osborne rebelled as a matter of conscience (Yes, he does have one!).[65] In her time at the Home Office, policies have been put in place which forced LGBT asylum seekers to prove their sexuality, some allegedly through intimate photos and videos of same-sex sexual activity. One individual was even told that she couldn't have been a lesbian, simply because she had children, saying that "You can't be a heterosexual one day and a lesbian the next day. Just as you can't change your race."[66]

Still, compared to her competitors, May was by no means the worst candidate with regards to LGBT equality. Under Michael Howard,

May abstained from voting on the Gender Recognition Act

"I want us to be a country where it doesn't matter where you were born, who your parents are, where you went to school, what your accent sounds like, what God you worship, whether you are a man or a woman, gay or straight, black or white. All that should matter is the talent you have and how hard you're prepared to work."[67]

Shortly after her appointment, she borrowed a page from Dubya's playbook: reading aloud from the Quran, a gesture of solidarity with Britain's Muslims and a warning shot at the far-right. Fair play to her, she has always courted the Muslim vote.[68] At least May can differentiate between honest citizens and Islamic extremists, which pleases the left a good deal, though the right is worried that she'll start banning criticism of Islam next.[69] Case in point, back in her Home Sec days, she was instrumental in banning Aerosmith frontman Steve Tyler Pamela Geller from the UK, calling it "a measure against unfettered free speech."[70]

See the main article on this topic: War on Drugs

As home secretary, she refuse to budge on any sort of discussion on drugs beyond the old prohibition line.[72] Her psychoactive substances bill attracted widespread criticism for its lack of grounding in reality: She banned literally everything that is psychoactive, which means you could theoretically be arrested for having virtually any substance in existence.[73]

In 2015, she banned an American rap artist, Tyler the Creator, from the UK on the ground that his songs "seek to provoke others to terrorist acts".[74]

banning "propaganda of non-traditional sexual relations". For a PM who has yet to apologise for Clause 28, this is a worrying precedent.

May is also threatening action against those who advance unpopular ideas or sympathize with terrorists, even if they don't themselves advocate violence or illegal action.[77]

As Home Secretary, she was in favour of increased surveillance especially of online activities.[78] May's first steps as premier have been to go after internet users, particularly journalists. It's all under the guise of national security.[79][80][81] Bonus: They won't be able to take it to the European court.

Fracking ban: okay to overturn. Brexit: nope, we have to listen to the will of the people.[83]

Cameron's Conservatives were environmentally-conscious. May clearly doesn't care at all.[84] She has merged the Department of Energy and Climate Change (DECC) into a new department called, well, "Business, Energy & Industrial Strategy". Which is an obvious conflict of interest and will likely reduce government action on climate change.[85]

May claimed in an interview with The Sunday Times that God has been guiding her through Brexit. That's the one thing which prevented her own cabinet from tearing her open to check that she wasn't a droid.

However, the fact that Theresa has campaigned both for and against the EU suggests that, at some point, she may have been talking to Satan.[86][87]

When has a snap election ever worked out well for the people who called it? The Tories are governing with a very slim majority, forcing them to cut a deal with the DUP to maintain a grip on Northern Ireland. No doubt the papers will dedicate just as much time highlighting this as they did Corbyn's ties to the IRA.[88][89][90]

It won't be Theresa at the helm, but Brexit will still proceed. But will it be a "hard" Brexit now? Likely not.

Basically a lot of hard-liner Tories are using the chaos of the Brexit negotiations to position themselves for a power grab. This has been going on for months, it's coming to a head now because the HoC will soon vote on the Brexit deal, and Theresa May has lost control of her cabinet.