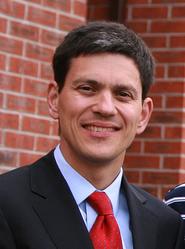 Miliband Senior in happier days, i.e. when Labour were actually in power.

David Miliband (born in 1965), a former British Labour Party politician, served as the Member of Parliament for South Shields from 2001 to 2013. He held several ministerial positions between 2007 and 2010, including that of Foreign Secretary (Miliband was the youngest person to ever hold the office, to which he was appointed at the age of 41).[1]. After Labour's loss in the May 2010 General Election, Miliband continued as shadow Foreign Secretary from May until September, at which point he effectively retired from senior-spokesperson positions for reasons outlined below.

In mid-2010, David Miliband was the least unlikely candidate for the position of leader of the Labour Opposition in the UK; the only other serious contender was his brother Ed. In a bizarre shock result, he lost out to Ed, who ascended to the Labour opposition leadership. To avoid constant comparisons between him and his brother, and to avoid any media generated manufactroversies over sibling rivalry, David stepped down from senior government positions and effectively disappeared from the media for some time. Several years later, this decision still has some people scratching their heads and wondering "why Ed? No, really, why Ed?" In the era of Jeremy Corbyn, Boris Johnson, and Donald Trump, David's bland, Blairite managerialist centrism looks increasingly far from what passes for politics today, but many people are nostalgic for an age when politicians didn't seem intent on breaking as many things as possible.

Following his failure to replace Gordon Brown as Labour leader in 2010, he was a backbench MP until 2013 when he quit parliament and became head of a New York-based NGO, the International Rescue Committee

, which provides aid to refugees and those affected by war and natural disasters.[2] He has largely kept clear of British politics, although he did resurface in 2019 to call for a second referendum as a solution to the Brexit mess.[3]

He is reputedly devastatingly intelligent. Since Labour is electable,[4] he could have become the first openly atheist leader of the UK - an act that would undoubtedly have sent the American Religious Right into a tizzy over the "special relationship." But Ed's also an atheist. As is Nick Clegg, who became deputy Prime Minister in the 2010 election. Mwa ha ha!

This British politics-related article is a stub.
You can help RationalWiki by expanding it.
Retrieved from "https://rationalwiki.org/w/index.php?title=David_Miliband&oldid=2434097"
Categories:
Hidden category: